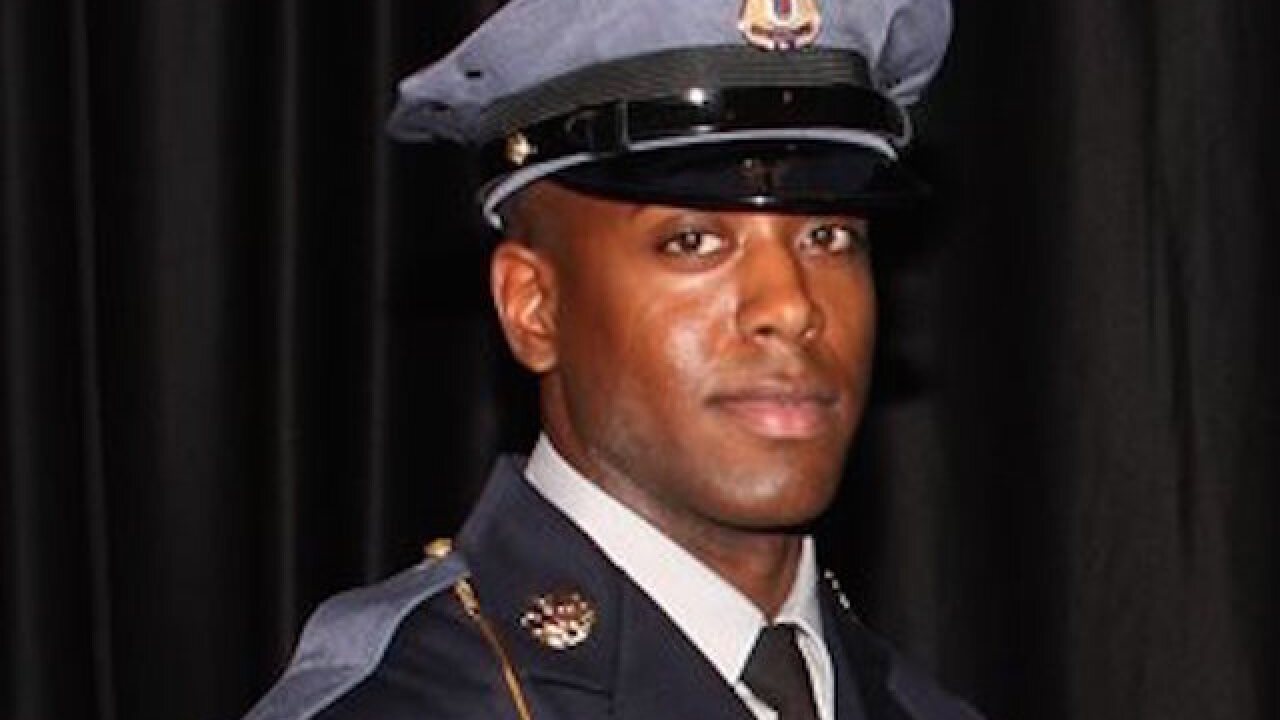 CHEVERLY, Md. (AP) — An undercover police officer was killed by his own colleagues' fire as he responded to the ambush of his police station by a gunman with a death wish, a police chief said Monday.

The gunman had been spraying bullets, hitting cars and even an ambulance, to draw officers outside the station. Colson also responded, jumping out of an unmarked car and wearing civilian clothes without body armor, the chief said.

In the confusion, despite their restraint, one of the other officers' bullets hit Colson, the chief said.

Colson demonstrated "extreme heroism" because he "drew fire to himself and in doing so was mortally wounded," the chief said.

Colson was declared dead later in a hospital. The gunman, identified as Michael Ford, was expected to survive. His brothers, Malik and Elijah Ford, also were taken into custody, and will face dozens of charges between them, the chief said.

Stawinski said federal agents have determined that there was no larger plot behind the ambush.

"This appears to be the act of the Ford brothers, for their own motives. We have reason to suspect that the Ford brothers did not expect (Michael Ford) to survive his encounter with police," the chief said.

The chief also said there were no outstanding warrants against Ford. That information conflicts with a sheriff's report from Greenville, South Carolina, which said Ford, 22, was being sought for allegedly assaulting his wife there the day before.

He said Colson's fellow officers were going about their business on the quiet, rainy Sunday when the gunman opened fire on the first officer he saw outside the station around 4:30 p.m. in Landover, a suburb northeast of downtown Washington, D.C., the chief said.

A gun battle followed, with several officers shooting at the suspect, Stawinski said.

"Those officers did not shrink. They bravely advanced and engaged this individual," the chief said.

Prince George's County State's Attorney Angela Alsobrooks called it "cowardice" and a "horrific act of evil," promising an aggressive investigation and prosecution. The FBI and the Bureau of Alcohol, Tobacco, Firearms and Explosives also are aiding police, spokesmen for the two federal agencies said.

Colson, who would have turned 29 this week, was a four-year department veteran who worked as an undercover narcotics officer. His football coach at Randolph-Macon College, where Colson played for one year, said he was "a great young man who was well liked and well respected."

"He was just a great human being," coach Pedro Arruza said. "He was a very positive, positive person and an upbeat guy, a good person to be around. He had a lot of friends on campus, everybody liked him. He was just a really high-character guy."

Sheriff's deputy Dominick Chambers, a friend from the police academy, said they celebrated their four-year anniversary as officers on March 12, the day before Colson was killed.

"He always wanted to be a police officer," Chambers said. "Everyone is taking it real bad, real bad. I'm talking to my classmates, checking in on them. We're not doing well."