NASHUA, N.H. — A 28-year-old man was captured pushing a woman to the ground in an alleged road rage incident in New Hampshire caught on camera by a fellow motorist.

The driver who recorded the alleged incident, Jennifer Needham, told ABC Boston affiliate WCVB that she noticed a confrontation begin to escalate between a woman driving a Toyota Prius and a man driving the vehicle in front of her on Sunday.

Needham said that as she pulled up to the scene, the man was approaching the woman's car. As Needham began recording, the man had returned to his car, and the woman, dressed in a yellow puffer coat, is seen in the video exiting her Prius to confront the driver in front of her.

Seconds after the man opens the driver's side door, he is seen using two hands to forcefully shove the woman, who immediately falls on her back onto the snowy median.

"When I saw that she was shoved to the ground, part of me was just like, ‘Did that really happen?’" Needham told WCVB.

The incident occurred Sunday morning near the Henri Bourque Highway just before noon, according to the Nashua Police Department, which described it as a "brief road rage" event. 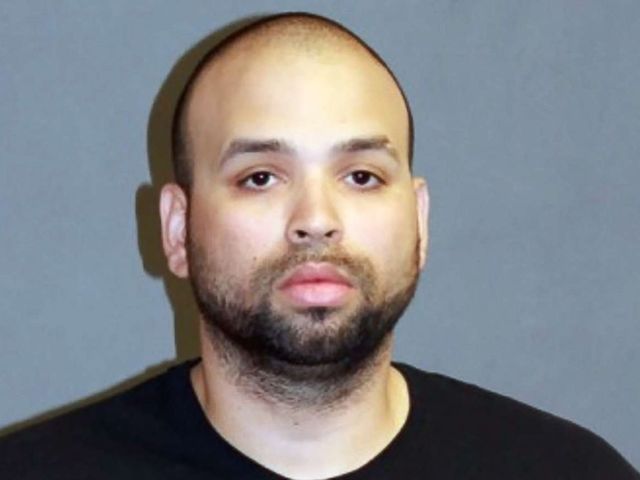 Montanez told WCVB that the woman was "blaring" her horn at him and drove into his vehicle.

"At that point, she was crazy," Montanez said. "So, I turn around, and I get back into my vehicle."

Montanez said that when the woman approached his car, she punched his window and opened his door.

"What was I supposed to do?" Montanez asked. "I mean, I didn't know if she was going to hit me, smack me or what."

The woman, who was not identified, told WCVB via email that Montanez backed into her car and that she went to his car to tell him not to leave the scene.

"He got out and shoved me so hard I lost my balance," she said.

Although the woman appeared "enraged" and as if she were "ready to do something" and she confronted Montanez, Needham said, "You don't put your hands on a woman. You just don't."

"It's unfortunate that it happened, and I wish it didn't happen that way," Montanez said. "We were both wrong in that situation."

Montanez was released on $5,000 bail and will be arraigned on March 22, police said.