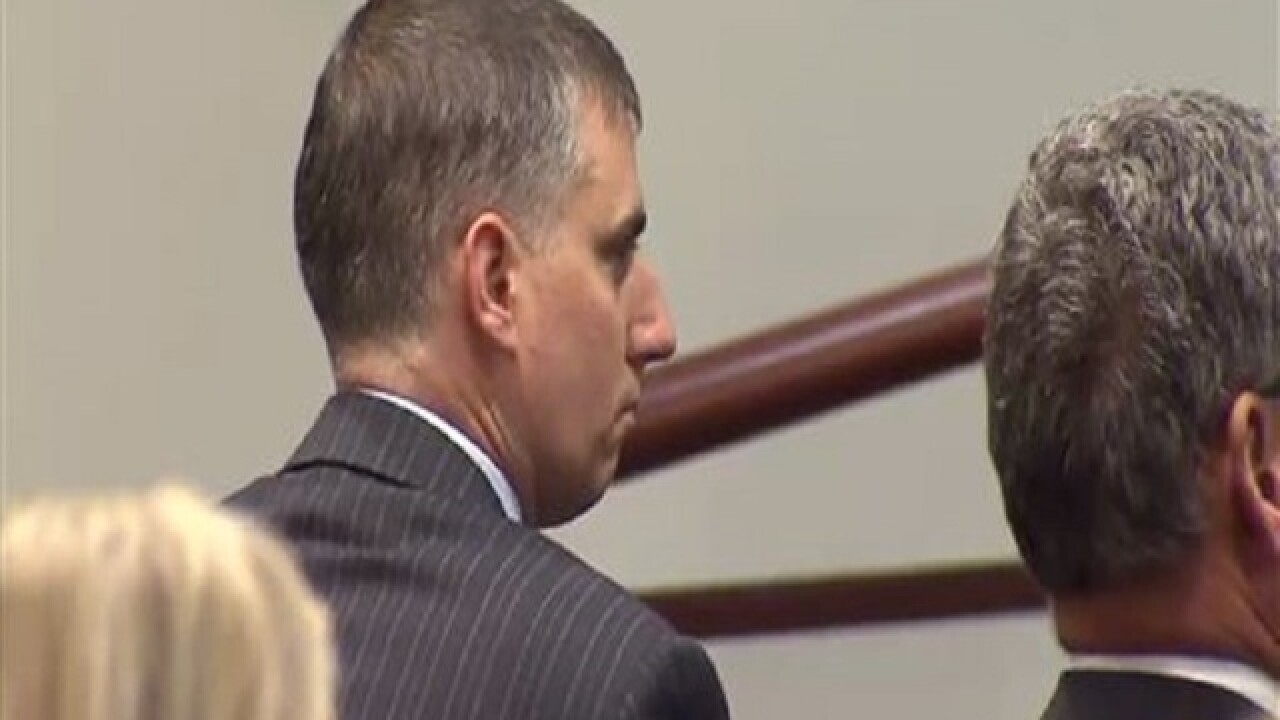 Image from video
<p>In this image made from a video, former police officer Stephen Rankin listens to the proceedings after the verdict was read Thursday, Aug. 4, 2016, in Portsmouth, Va. A jury convicted Rankin of voluntary manslaughter on Thursday in the shooting death of an unarmed black man who had been accused of shoplifting. (The Virginian-Pilot via AP, Pool)</p>

By: Associated Press
Posted at 8:51 PM, Aug 04, 2016
PORTSMOUTH, Va. (AP) — A jury recommended 2 1/2 years in prison for a white former police officer convicted of voluntary manslaughter on Thursday in the shooting death of an unarmed black man who had been accused of shoplifting.
The ex-officer, Stephen Rankin, shot 18-year-old William Chapman in the face and chest outside a Wal-Mart store last year after a security guard called police to go after the young man.
No video recorded the actual killing, and testimony conflicted on the details of what happened. But most witnesses said Chapman had his hands up, and prosecutor Stephanie Morales said the officer could have used non-deadly force.
The officer "brought a gun into what is at worst a fist fight," Morales told the jury, which deliberated for nearly two days before returning its verdict.
Rankin, 36, faced one to 10 years on the manslaughter conviction. Morales asked jurors to give him the maximum, while defense attorney James Broccoletti argued that no amount of jail time would bring Chapman back to life.
A judge will formally sentence Rankin on Oct. 12. The judge doesn't have to follow the jury's recommendation, but can't increase the penalty.
Rankin, who was fired from the Portsmouth police force after being indicted, had already killed another unarmed suspect, four years earlier, and many in the mostly black city of 100,000 saw his trial as a chance for accountability as police shootings continue around the country.
But his lawyers said this case had nothing to do with deadly uses of force against other black men.
"I think this is a terrible tragedy I wish it had never happened. I wish none of it had ever occurred," Rankin testified after being found guilty.
"I can't begin to fathom how much pain that family is going through. I wish I could have done more to keep him alive," he added.
Chapman's second cousin, Earl Lewis, also took the stand, speaking through tears about the family's struggle to find money to bury him.
The jurors — eight black and four white — did not convict on the first-degree murder charge prosecutors sought. Criminal charges are rare in police-involved shootings, and convictions are even more uncommon.
On-duty officers kill about 1,000 suspects a year in the United States, but only 74 have been charged since 2005, said Philip Stinson, a criminal justice professor at Bowling Green State University in Ohio. A third of these were convicted, a third were not and the other cases are pending.
People tend to give police the benefit of the doubt, Stinson said. "Juries are very reluctant to convict an officer because they all recognize that policing is difficult and violent," he said.
Broccoletti argued that Rankin had to shoot, because "everything he tried to do didn't work."
And some witnesses backed Rankin's testimony. Paul Akey, a construction worker who was nearby, said Chapman "went after the officer with throwing fists, and it looked like he knocked a Taser out of the officer's hands."
Rankin testified that he calmly approached Chapman to discuss the shoplifting accusation and was preparing to handcuff him when the teen refused to comply with his orders and a struggle ensued. He said he used his stun gun on him, but Chapman knocked it away. Both men then faced each other from a short distance.
That's when he drew his pistol, Rankin said, and repeatedly commanded Chapman to "get on the ground." Instead, he said Chapman screamed "shoot me" several times before charging at him from about 6 feet away. He said he experienced "tunnel vision" at that point, and fearing for his life, fired twice to stop him.
"I had no reason to think he was going to stop attacking me," Rankin said. "I was scared."
But Gregory Provo, the Wal-Mart security guard who reported Chapman to police, testified that Chapman never charged at the officer. He said Chapman raised both hands, boxing-style, and said "Are you going to f---ing shoot me?" before Rankin fired at him from about 5 yards away.
Rankin had been cleared of wrongdoing in his first on-duty killing. He said he fired 11 times at that burglary suspect because the white man charged at him while reaching into his waistband with his hands.
The killing of Chapman "would not have gotten this kind of attention five years ago," Stinson said. Now of course, use-of-force complaints are getting more scrutiny, and increasingly become national news.
Earlier Thursday in Baltimore, a 15-year veteran officer was convicted of assault for shooting an unarmed burglary suspect in 2014, and his police commissioner was taking steps to fire him. Prosecutors said Officer Wesley Cagle approached that suspect as he lay wounded on the floor and shot him in the groin. The suspect survived.
Copyright 2016 The Associated Press. All rights reserved. This material may not be published, broadcast, rewritten or redistributed.