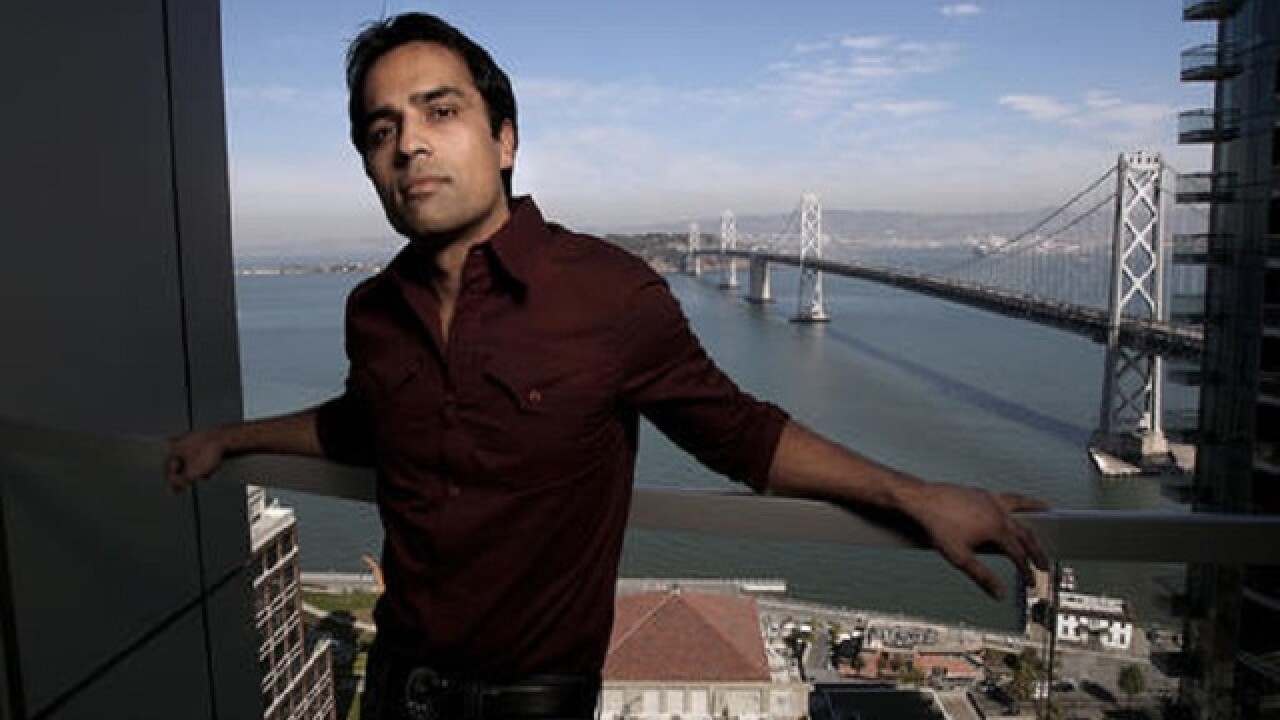 Michael Macor
<p>HOLD FOR STORY - In this Oct. 17, 2008 photo, Gurbaksh Chahal stands in his San Francisco high-rise penthouse in downtown San Francisco. Chahal is the San Jose internet entrepeneur who made a company as a teenager and sold it to Yahoo for $300 million a few years ago.He has a book coming out on Oct. 23 and will appear on Oprah the same day. (Michael Macor/San Francisco Chronicle via AP)</p>

SAN FRANCISCO (AP) — Gurbaksh Chahal's rise from a high school dropout to a 25-year-old Internet mogul who sold his startup for $300 million landed him on "The Oprah Winfrey Show" and "Extra" in segments touting him as a highly eligible bachelor.
That image began crumbling when prosecutors charged him with dozens of felonies in 2013, saying surveillance footage from his San Francisco penthouse showed him punching and kicking his girlfriend 117 times and trying to smother her with a pillow. Chahal avoided prison, receiving probation instead, after the woman stopped cooperating with authorities and a judge said the video could not be used as evidence.
Now he's again facing time behind bars after violating his probation by allegedly kicking another girlfriend, who also didn't help with the case, prosecutors say. Video of the first attack made it into San Francisco Superior Court, where a judge was set to sentence the 34-year-old Friday.
Chahal has defended himself against the initial charges, saying he lost his temper but did not hit his girlfriend 117 times. And his attorneys have attacked the second woman's credibility, saying she got into a sham marriage to get a U.S. visa and had been drinking the night she said Chahal hit her.
Chahal's legal woes extend beyond the criminal cases. Two former employees have sued him for discrimination, painting him as a bullying boss who thought little of women — traits hard to combat in the male-dominated world of Silicon Valley, experts say.
"What makes Silicon Valley more challenging than other areas is ... it has a macho culture that is deeply embedded," said Deborah Rhode, a law professor at Stanford University who teaches gender equity law. "There are very few women in leadership positions."
Chahal's criminal attorney, James Lassart, and the lawyer representing him in the lawsuits, Patricia Glaser, did not return emails or phone calls seeking comment. Emails to a nonprofit foundation Chahal started and his online advertising technology company, Gravity4, were not returned. A message to his Twitter account also went unanswered.
Faced with the initial charges, Chahal got help from powerful former San Francisco Mayor Willie Brown and the former chief financial officer for the state of California, Steve Westly, according to one of the lawsuits and emails between Westly and Chahal that The Wall Street Journal reported.
Westly, who was on the board of a company Chahal founded, suggested the businessman reach out to Brown, according to a 2015 lawsuit by Yousef Khraibut, a former Gravity4 employee. Chahal told Khraibut that he paid Brown a $250,000 retainer to exert pressure on the district attorney to dismiss the charges, saying Brown had the "juice" to make them disappear, the lawsuit said.
A woman who answered the phone at Brown's law office said he would not be back until Friday. Brown said in a radio interview last September that he was asked to put together a legal team to defend Chahal but did nothing unethical and returned most of the $250,000.
Westly, whose name has been mentioned as a possible gubernatorial candidate in 2018, said in a statement that he doesn't comment on ongoing legal cases but that domestic violence in any form is inexcusable.
Khraibut's lawsuit also accuses Chahal of crass behavior, saying he sought male colleagues' opinions of a bikini photo of a prospective female employee and used a vulgar term to describe decisions to let attractive women advance in the hiring process.
In court documents, Chahal shot back that Khraibut was fired for not doing his work and was seeking publicity to get money he wasn't owed.
In prosecuting Chahal, the district attorney's office faced a setback when a judge ruled that police illegally seized the surveillance footage from the mogul's penthouse. But prosecutors pressed ahead, and Chahal pleaded guilty in 2014 to misdemeanor charges of battery and domestic violence battery.
A different judge revoked his probation last month after prosecutors say he repeatedly kicked another girlfriend in the same penthouse in 2014 and then dissuaded her from talking by threatening to report her to immigration authorities.
Chahal accused both women of cheating on him, prosecutors say.
The judge allowed prosecutors to introduce the video after they argued it showed a pattern of abusive behavior. She reviewed it before issuing her ruling but has not released it publicly.
Copyright 2016 The Associated Press. All rights reserved. This material may not be published, broadcast, rewritten or redistributed.