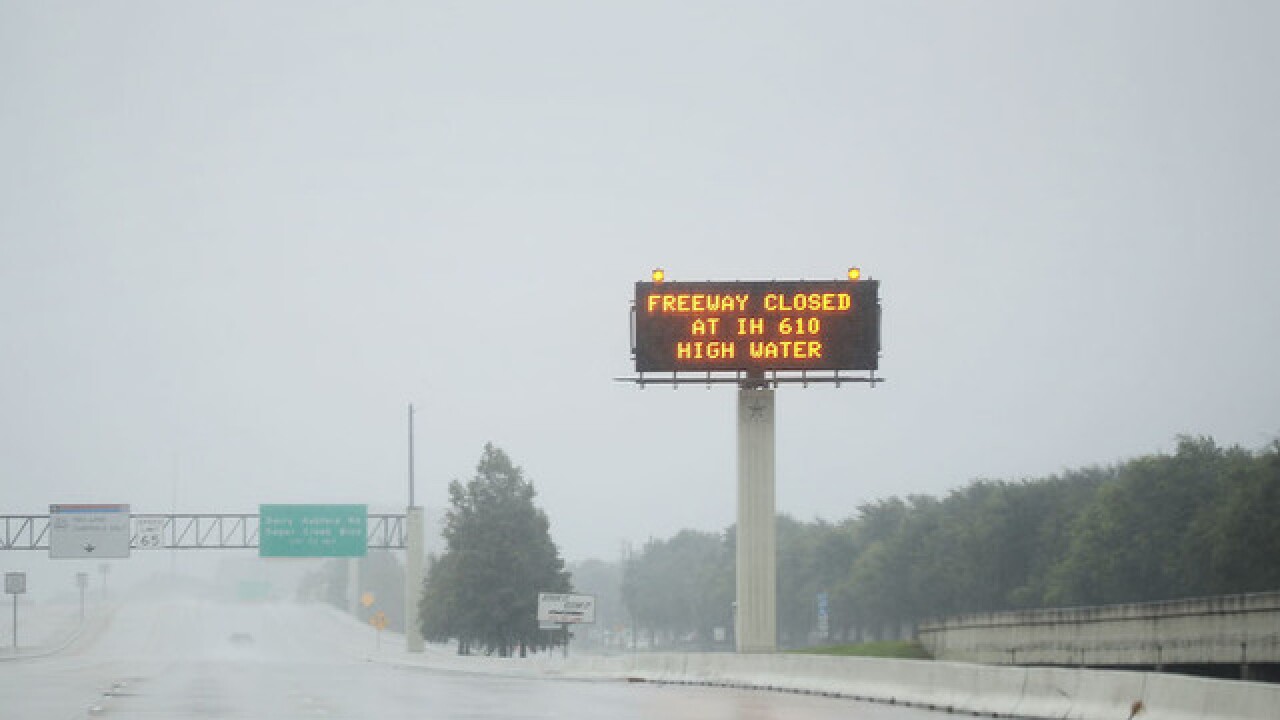 Copyright Getty Images
Joe Raedle
<p>HOUSTON, TX - AUGUST 27: A sign along I-69 tells drivers that hwy 610 is closed due to high water from Hurricane Harvey on August 27, 2017 in Houston, Texas. Harvey, which made landfall north of Corpus Christi late Friday evening, is expected to dump upwards to 40 inches of rain in Texas over the next couple of days. (Photo by Joe Raedle/Getty Images)</p>

Sunday morning, as Houston residents found themselves trapped on rooftops and wading through flooded streets with children riding on their shoulders, Mayor Sylvester Turner defended his decision not to order evacuations before the city was hit by torrential rain from Hurricane Harvey.

Houston, which is known for its susceptibility for flooding because of its flatness, was never put under an evacuation order, voluntary or mandatory, even as then-Hurricane Harvey was threatening southeast Texas.

"You literally cannot put 6.5 million people on the road," Turner said in a press conference. "If you think the situation right now is bad, you give an order to evacuate, you are creating a nightmare."

But many in Houston were already living in a nightmare. They woke up to find they were trapped inside their flooded homes and unable to receive aid from first responders, who were inundated with more than 2,000 calls for help, according to Turner.

Turner said such a massive evacuation would need to be well-coordinated, "all the way from Houston to the destination," and insisted that the best place for people to be was sheltered in their homes.

"You issue an evacuation order and put everyone on the highway," Turner said, "you are really asking for a major calamity."

More than 1,000 people had to be rescued overnight while the storm dumped anywhere from 15 to 30 inches of rain across southeast Texas. The heavy rain, coupled with the overflowing of Houston's bayous, meant water levels in some areas could reach 50 inches, according to the National Weather Service.

Now the city is wrestling with a massive effort to find shelter for displaced residents, sending them to centralized locations around the city that Turner calls "lily pads."

The volume of this weekend's Harvey rainfall was largely predicted. CNN meteorologists on Friday forecast more than 20 inches of rain, and the National Weather Service first put Houston under a Flash Flood Watch -- meaning flooding was a possibility and residents should be prepared -- on Thursday afternoon at 4:38 p.m.

"At this time I can reemphasize there will be no mass evacuations called," said Harris County Judge Edward Emmett, who is responsible for overseeing emergency operations, at a joint press conference with Turner on Friday. He noted that several coastal towns within Harris County, where Houston lies, had issued voluntary evacuations because of the storm surge.

According to the state's website, none of the communities in Harris County were placed under mandatory evacuation orders.

But there seemed to be confusion around what Houston residents should do, with Texas Gov. Greg Abbott appearing to call for an evacuation at a Friday press conference.

"If you wait until you realize how serious this condition is, you likely will find that it's too late for you to be able to evacuate," Abbott said.

When presented with the governor's comments in a separate press conference, Emmett said, "The other thing he said was, 'Listen to your local officials.'"

"Perhaps it was a bit of a mixed message, but he has assured me, that that is his message. Listen to the local officials."

"If we wanted to call an evacuation, we wouldn't even know where to call it," Emmett said, "cause we don't know where the rain's going to fall and which watersheds are going to be affected. So there is absolutely no reason to evacuate from Houston or the greater Houston area."

Turner said at the same press conference that reports showed the city receiving anywhere from 15 to as much as 30 inches of rain.

"Water could come out of the bayous and just overpower our capabilities," he said, "and in that case we are ready to step in."

The city had high-water rescue vessels strategically positioned to help evacuate people if needed, he said, and had identified potential shelters and churches that were available to take in those in need.

"This is a situation where at this point, people just need to be calm and not panic," Turner said.

Officials may have been wary of issuing an evacuation order because of the lessons learned during Hurricane Rita in September 2005.

Several people died as thousands and thousands attempted to flee the storm in gridlocked traffic.

More than 20 perished in a bus accident south of Dallas, according to the National Hurricane Center, while some died of heat exhaustion during the evacuation.

On Sunday, CNN meteorologist Chad Myers agreed with officials' decision to not issue an evacuation order.

"He was right when he said, 'I don't want 6.5 million people on flooded roadways and dying in their cars,'" Myers said.

"You can't move a city like Houston with six hours' notice," he added. "But people shouldn't need an evacuation order if they live in a flood plain and they see 25 inches of rain coming.

"The fact that they didn't even get a voluntary evacuation order ... may have led people to stay because there was not even a nudge from local officials."

Another CNN meteorologist, Dave Hennen, said Harvey was a "one-in-1,000-years type of event."

"I think people were used to flooding in Houston when they get two to three inches of rain, but nobody comprehended what two to three feet of rain could do," he said. "This is truly historic, so people were caught off guard."

In a press conference Sunday afternoon, a reporter asked Gov. Abbott whether there had been a breakdown in communications when he said people should evacuate, but local officials contradicted him.

"We've moved beyond whether or not there should have been an evacuation or not," Abbott said. "We're at a stage where we just need to respond to the emergencies" the people of Houston are facing.