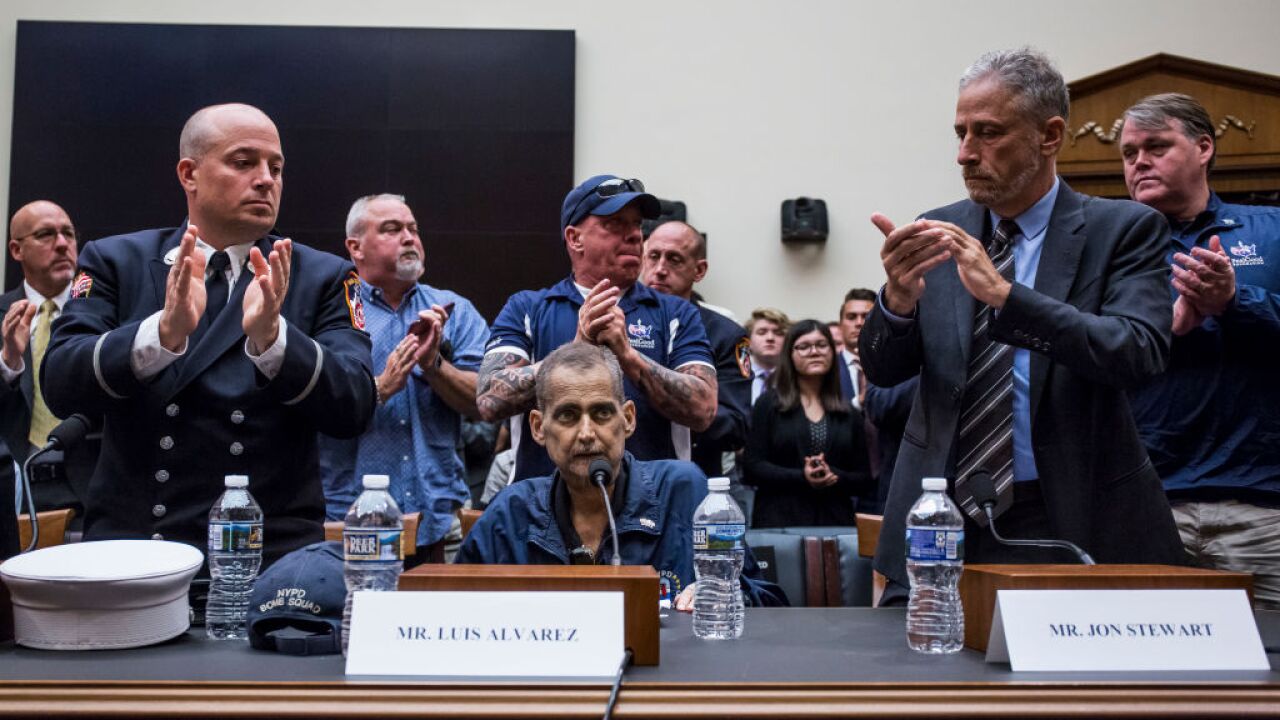 There were cheers and clapping on the House floor during the vote, which came after Democrats and Republicans spoke earlier in the day in support of the legislation. During the vote, Democratic Rep. Alexandria Ocasio-Cortez of New York went up into the public gallery above the floor to speak with people who had come to watch the vote.

The bill easily cleared the House and will be sent to the Senate, where timing on that vote is not yet clear, though Senate Majority Leader Mitch McConnell has vowed to hold a vote on the legislation .

Ahead of Friday's vote, Stewart on Friday referred to the House passage as the "semi-finals," as he continued to pressure Congress to get the legislation to the President's desk.

"This is the semi-finals," Stewart said at the press event on Capitol Hill flanked by first responders and members of Congress. "The finals are two weeks from now in the Senate."

The current law, which was last renewed in 2015, expires next year and the fund's administrator says it doesn't have enough money to pay out all current and projected claims.

September 11 first responder John Feal told reporters at the end of last month that McConnell committed to holding a vote to extend the fund, after sitting down with Feal and other 9/11 first responders on Capitol Hill.

"Mitch McConnell made a commitment to the 9/11 community and my team leaders that he is going to help us get a piece of legislation that is going to be passed in the House in July, for an August vote in the Senate," Feal said at the time.

Stewart, whose vocal -- and deeply critical -- advocacy on behalf of the bill has drawn national attention, again castigated lawmakers Friday who raised concerns about the program's cost, citing the world hot dog eating champion in the process.

"It's like watching Joey Chestnut throw down 70 hot dogs on Coney Island and then at the end of it, not have a Coke because he's, you know, watching the calories," Stewart said. "Don't be nuts here. This is necessary. It is urgent and it is morally right."

The aftermath of the destruction from the 9/11 attacks has led to severe health impacts on first responders and recovery workers, including lung impairment and cancer, with thousands of death and injury claims.

The death of 9/11 first responder and advocate Luis Alvarez last month sparked an outpouring of grief. On Monday, the lead sponsors of the victim compensation fund bill announced that the legislation will be renamed to honor Alvarez and others.

"Luis Alvarez, Ray Pfeifer, and James Zadroga dedicated their lives to protecting others and advocating on behalf of those ailing after the 9/11 attacks," Nadler said in a statement released as part of the announcement of the bill renaming. "It is a fitting tribute to rename this legislation after these heroes who epitomized bravery and made the ultimate sacrifice for our country."

Stewart said Friday he expected the Senate to act soon.

"I fully expect that by August 2nd, we will have our final signing ceremony."

This story has been updated with additional developments Friday.