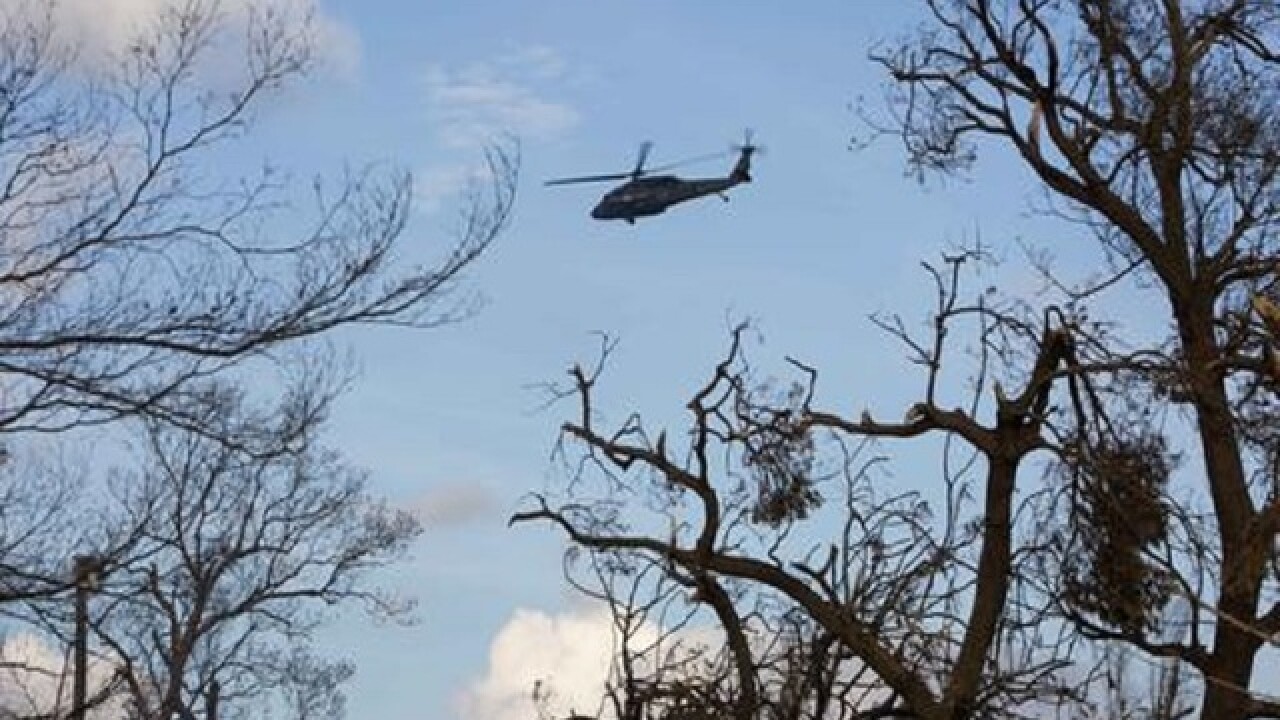 Dieu Nalio Chery
<p>A United States armed forces helicopter flies past in Dame-Marie, Haiti on Monday, Oct. 10, 2016. Nearly a week after Hurricane Matthew smashed into southwestern Haiti, some communities along the southern coast have yet to receive any assistance, leaving residents who have lost their homes and virtually all of their belongings struggling to find shelter and potable water. (AP Photo/Dieu Nalio Chery)</p>

DAME MARIE, Haiti (AP) — In this most western tip of Haiti, 300 patients with festering wounds lay silently on beds at the main hospital in the seaside village of Dame Marie waiting for medicine a week after Hurricane Matthew hit the remote peninsula.
Among the injured was Beauvoir Luckner, a cobbler and farmer who walked 12 kilometers (7 miles) in three days after a tree crushed his leg and killed his mother when it fell on their house. His leg might have to be amputated, but all doctors can do is clean his wounds because the hospital has run out of everything, including pain killers.
"There's no water, no antibiotics," Dr. Herby Jean told The Associated Press. "Everything is depleted ... We hear helicopters flying overhead, but we're not getting anything."
There was also no power and frustration grew on Tuesday as food, medicine and fresh water kept arriving at the main city in Haiti's southwest peninsula but was slow to reach increasingly desperate communities like Dame Marie.
Meanwhile, Luckner lay on a mattress with no sheets and a bandage around his left leg.
"It took a lot of misery to get here and now that I'm here, there's still misery," he said.
Meanwhile, at a cramped police station serving as a makeshift clinic in the nearby town of Marfranc, Darline Derosier fastened IV drips to jail cell bars, wiped the brows of cholera patients and tended to the wounds of those injured in the storm.
She was the only health worker helping about 40 patients inside the station bereft of police as she waited for help to arrive. Among the patients was an elderly woman lying unconscious on a jail cell floor with a leg bandaged in an old rag and a man with gashes around his neck, his eyes fluttering.
"People will die soon if we don't get some aid," an overwhelmed Derosier told the AP.
The U.N. humanitarian agency in Geneva has made an emergency appeal for nearly $120 million in aid, saying about 750,000 people in southwest Haiti alone will need "life-saving assistance and protection" in the next three months. U.N. officials said earlier that at least 1.4 million people across the region need assistance and that 2.1 million overall have been affected by the hurricane. Some 175,000 people remain in shelters.
Electricity was still out, water and food were scarce, and officials said young men in villages along the road between the hard-hit cities of Les Cayes and Jeremie were building blockades of rocks and broken branches to halt relief convoys.
The National Civil Protection headquarters in Port-au-Prince raised the official nationwide death toll to 372, which included at least 198 deaths in Grand-Anse. But local officials have said the toll in Grand-Anse alone tops 500.
The U.N. also said the hurricane has increased the risk of a "renewed spike" in the number of cholera cases. A cholera outbreak since 2010 has already killed roughly 10,000 people and sickened more than 800,000.
Roosevelt Zamos of the Civil Protection Agency said there were 40 cases of cholera in Jeremie alone. He said eight people have died of cholera in Grand-Anse since the storm.
It can take from 12 hours to five days for cholera symptoms to appear after ingesting contaminated food or water, according to the World Health Organization.
The open-air cholera treatment center at Jeremie's main hospital had no running water Monday, and at least a dozen of the new patients were under age 10.
Dr. Thiery Francois, lead doctor for the Ministry of Health at the cholera center, said he didn't know how many new cases had been caused by the storm nationwide.
"Certainly there are cases we don't know anything about," he said, referring to still-isolated areas.
People in the southern seaside community of Les Anglais and surrounding areas said little to no aid had reached them. An aid group tried to distribute food and other emergency supplies by boat on Sunday, but it was forced to leave after a large crowd gathered and began to fight.
An estimated 158 people died in Les Anglais, said two police officers who declined to give their names because they were not authorized to talk to the media.
Francis Jean, a 42-year-old farmer and taxi driver, was awaiting help after he, his wife and three daughters survived the storm but lost their roof and all their belongings.
"You can't even explain what happened here. I've never seen anything like this in my life," he said. "This town doesn't exist anymore. There's nothing."
Copyright 2016 The Associated Press. All rights reserved. This material may not be published, broadcast, rewritten or redistributed.