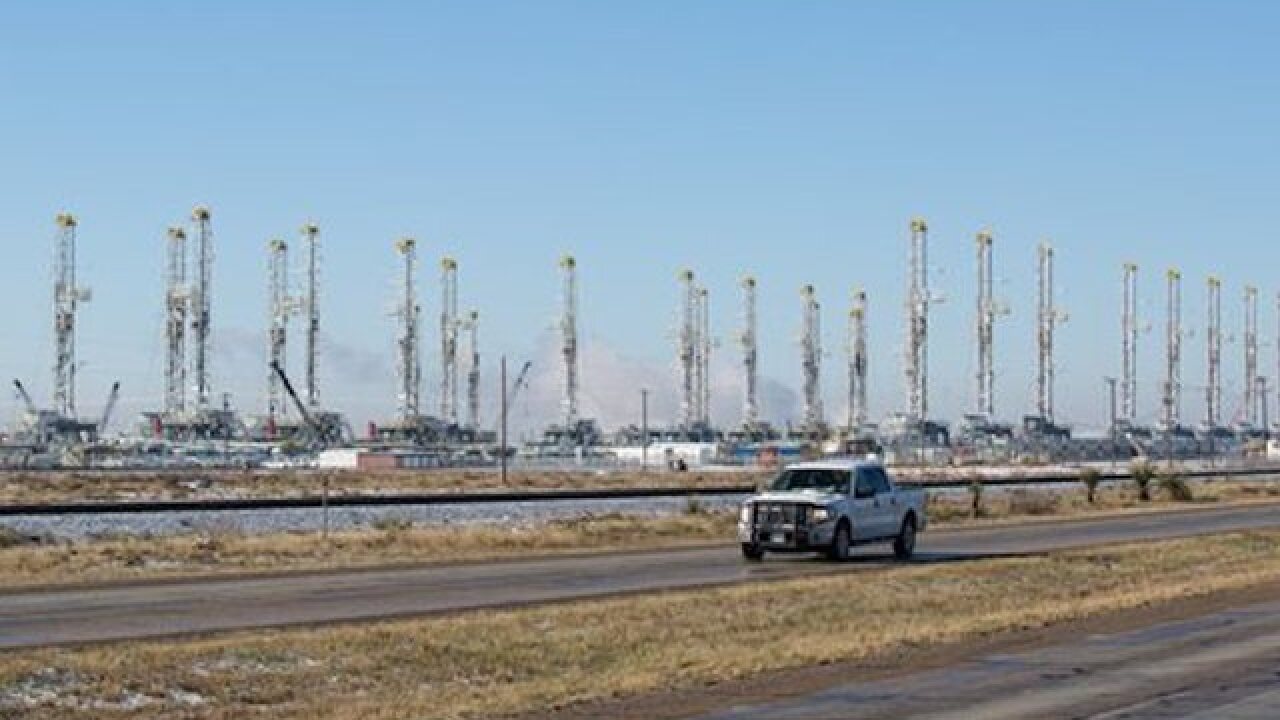 Courtney Sacco/Odessa American via AP
Courtney Sacco
<p>FILE - In this Wednesday, Feb. 25, 2015, file photo, more than 30 oil drilling rigs are idle in a Helmerich & Payne, Inc. yard in Odessa, Texas, along Highway 80, as rig counts drop in the Permian Basin. The price of oil continues to fall, extending a slide that has already gone further and lasted longer than most thought, and probing depths not seen since 2003. Lower crude prices are leading to lower prices for gasoline, diesel, jet fuel and heating oil, giving drivers, shippers, and many businesses a big break on fuel costs. (Courtney Sacco/Odessa American via AP)</p>

NEW YORK (AP) — U.S. stocks recovered much of an early plunge Wednesday, but the price of oil still suffered its worst one-day drop since September.

Energy companies were pummeled as the latest fall in the price of oil threatened more damage to an industry that has already been stricken with bankruptcies, layoffs and other cutbacks.

While cheap oil is good for many companies and consumers, investors are worried demand is falling because the global economy is slowing down.

Overseas markets also fell. Japan's Nikkei index entered a bear market, down 20 percent from its peak in June, and European benchmarks lost between 3 and 4 percent.

OIL GLUT: James Liu, global market strategist for JPMorgan Funds, said the global economy remains relatively healthy and demand for oil hasn't fallen off. But companies are still producing a great deal of oil, so tremendous stockpiles have accumulated. While companies started shutting down drilling rigs and wells in late 2014 after prices started to decline, production of oil didn't change much.

"We're starting to see production declines basically two years after rig count started to decline," Liu said. He said production will keep falling and oil prices will stabilize in the middle of 2016, then start rising.

WHEN WILL IT END? Jack Ablin, chief investment officer of BMO Private Bank, said he thinks stocks will fall a bit further still. But he doesn't expect a global collapse. Ablin said that for years, investors bought stocks without too much regard for risk. He said investors felt that if things ever got too bad, the Federal Reserve would help prop up the market.

SPIRIT RISES: Spirit Airlines said its profit margins will be stronger than expected and costs for aircraft rent, maintenance and other items will be smaller. Its shares gained $4.72, or 12.5 percent, to $42.62. The plunge in energy prices has also helped airlines save money on jet fuel.

BONDS: U.S. government bond prices rose as traders shifted money into lower-risk investments. The yield on the 10-year Treasury note dropped to 1.99 percent, its lowest level since October, from 2.06 percent a day earlier. That yield, which is a benchmark for setting interest rates on home mortgages and other kinds of loans, has fallen sharply since the beginning of the year. At the end of 2015 it stood at 2.30 percent.