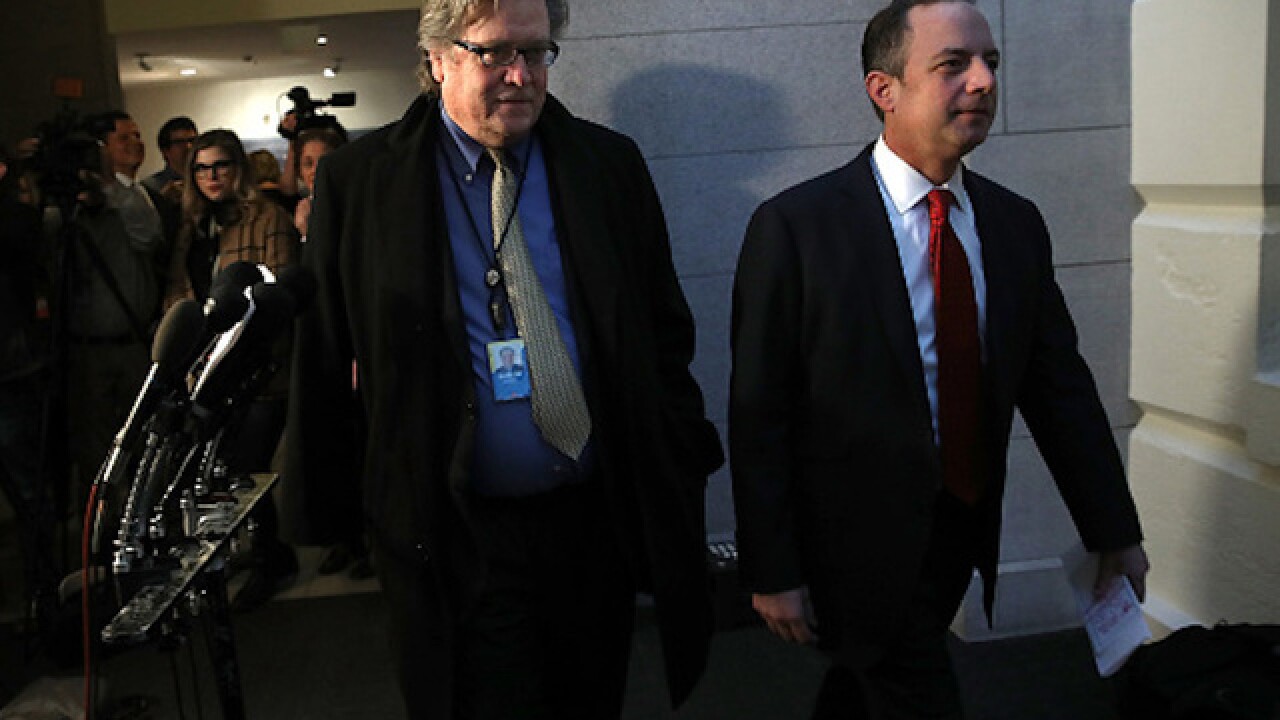 Copyright 2017 Scripps Media, Inc. All rights reserved. This material may not be published, broadcast, rewritten, or redistributed.
Win McNamee
<p>WASHINGTON, DC - MARCH 23: U.S. White House Chief Strategist Steve Bannon (L) and White House Chief of Staff Reince Priebus walk to a meeting of the House Republican caucus at the U.S. Capitol March 23, 2017 in Washington, DC. Bannon and Priebus came to the Capitol after U.S. Speaker of the House Paul Ryan and House GOP leaders postponed a vote on the American Health Care Act after it became apparent they did not have enough votes to pass the legislation that would repeal and replace the Affordable Care Act. (Photo by Win McNamee/Getty Images)</p>

The rise of President Donald Trump's son-in-law, Jared Kushner, has only further isolated Priebus, the chief of staff, who himself has grown touchy about the constant questions about his competence and stature in the White House. Priebus appears more uncertain in his post than ever as Trump grows impatient with how his presidency is being viewed, officials said.

Possible replacements began circulating Friday morning, among them House Majority Leader Kevin McCarthy and Gary Cohn, Trump's chief economic adviser. McCarthy has been an ally to Trump since the summer, but, as with Cohn, it's unclear how deep Trump's trust runs with them.

"He knows how to build a coalition to get legislation passed," one senior GOP source with knowledge of the list said of McCarthy.

Also on the short-list: Wayne Berman of Blackstone Group, who served as a former assistant Secretary of Commerce under President George H.W. Bush and David Urban of the American Continental Group, and a former chief of staff to the late Sen. Arlen Specter. Urban worked on Trump's campaign in Pennsylvania.

The names were first reported by Axios.

Another longtime ally, New Jersey Gov. Chris Christie, is a potential option, though sources close to Christie waved off the idea. Kushner, whose father was prosecuted by Christie, could also throw water on the move.

It's not clear yet that Trump is ready to pull the trigger on any changes just yet, the senior GOP source said.

Some Republicans think that Trump is not ready to make a change, even though they feel that Priebus and Bannon should go.

Some in the White House are pushing back on the rumors of change, including one senior official who was adamant Priebus is not going anywhere, dismissing the talk as just "palace intrigue."

It all comes as the President has begun openly questioning the makeup of his senior staff as he looks for a win that could reboot his presidency. Who ultimately prevails in the ideological standoff between blocs led by Kushner and Bannon, his chief strategist, could determine the trajectory of Trump's term in the months or years ahead.

He's begun asking those outside the administration -- including wealthy friends and longtime confidantes -- whether they approve of the makeup of his staff.

Along with Priebus, speculation has turned to Bannon, who has only more recently weathered near constant rumors about his standing in the West Wing.

Seat at the table

As Trump sat for dinner Thursday with his Chinese counterpart in an ornately frescoed dining room a Mar-a-Lago with the fresh divides seizing the White House staff on full display.

Seated next to President Xi Jinping's wife -- two seats down from Trump himself -- was Kushner, the commercial real estate scion and husband of Ivanka Trump, who is quickly consolidating power just shy of the Trump administration's 100 day mark.

Further down the banquet table -- sandwiched between two Chinese officials -- was Steve Bannon, the President's controversial chief strategist who multiple administration officials now say is in open conflict with Kushner, leading to new polarization in the West Wing just as Trump hopes to reboot his presidency.

To White House aides, the tableau was telling: While Bannon still has a seat at the table, his position seems to slipping. Kushner, meanwhile, appears ascendent, even as Trump continues to go to both men for advice.

According to a person who have spoken with Bannon in recent days, the bomb-throwing former Breitbart executive has said he feels his entrenched battle with Kushner -- and, by proxy, with Trump's daughter, Ivanka, and other moderate members of the administration -- is "unwinnable" given Trump's intense loyalty to his own family.

He says he's determined to continue pressing for key issues that helped propel Trump to the White House: cracking down on illegal immigration and scrapping the federal regulations he says compose an overbearing "administrative state."

But his standing in Trump's inner-circle has been diminished. He was stripped of a post on the National Security Council this week, even as Kushner waded further into his father-in-law's foreign policy affairs with a trip to Iraq and a leadership role in preparing for this week's meeting with Xi.

Bannon's ouster from the National Security Council Wednesday was only the latest sign of Kushner's rise, sources said. While H.R. McMaster, the national security adviser, has been working for weeks to find a way to rid the White House foreign policy operation of Bannon, it was ultimately Kushner's influence that made it happen, sources said.

Bannon deemed reports that he recently threatened to quit "ridiculous."

But it's clear his position in the White House is in jeopardy. One Trump confidant predicted: "Bannon will likely be gone soon."

While Bannon's influence has waned considerably inside the West Wing since the early days of the administration, he remains a powerful force outside the administration. Nowhere is that more clear than Breitbart News, his former power center that he is still closely aligned with.

One Trump aide, who sits on the Kushner side of the divide, bluntly acknowledged this tension and said it could be a reason for the President to not throw Bannon overboard for fear of what he may do to the presidency he helped build.

On Thursday night, as Trump was weighing the most consequential national security decision of his presidency, it was the Kushner wing of Trump's staff who appeared to win over their boss.

Instead of leaning upon the nationalist worldview of Bannon -- who has argued against US intervention abroad and was a key architect of Trump's "America First" policy -- Trump dove headfirst into a foreign conflict, ordering airstrikes in Syria to punish the regime of Bashar al-Assad for its use of chemical weapons on civilians.

The decision was made just ahead of Trump's dinner with Xi. After landing in Mar-a-Lago Thursday, Trump huddled for a lengthy briefing from his top national security officials in a secure facility installed at the resort, going over options with Defense Secretary James Mattis, McMaster, and Secretary of State Rex Tillerson.

Bannon and Kushner sat in on the meeting as well. And while officials declined to detail the specific recommendations of Trump's top aides, the strikes that the President ordered reflected a break from the nationalist stance he adopted as a candidate that was driven, in large part, by Bannon's advice.

The divide between Bannon and Kushner has extended beyond the two men themselves, who work from abutting offices just steps from the Oval Office.

Rival factions have emerged, pitting those aides who consider themselves the nationalists -- including Bannon and the controversial policy adviser Stephen Miller -- against a more global-minded wing, led by Kushner, Cohn and deputy national security adviser Dina Powell, according to two sources familiar with the situation.

Both Cohn and Powell -- who both came from the administration directly from Goldman Sachs -- are viewed internally as close to Kushner, a dynamic that rankled those in the White House close to Bannon.

Bannon's faction has come to term Cohn as "Globalist Gary," an insult for those aligned with the Bannon's populist views.

Trump himself -- who has wielded a management style based on staff divisions and chaos -- downplayed talk of a staff shakeup on Thursday.

Asked aboard Air Force One as he flew to Florida if a staff shakeup was coming, the president said he thought the administration had "already shaken things up."

"I think we've had one of the most successful 13 weeks in the history of the presidency," he said.

CNN's Jim Acosta and Dana Bash contributed to this report.