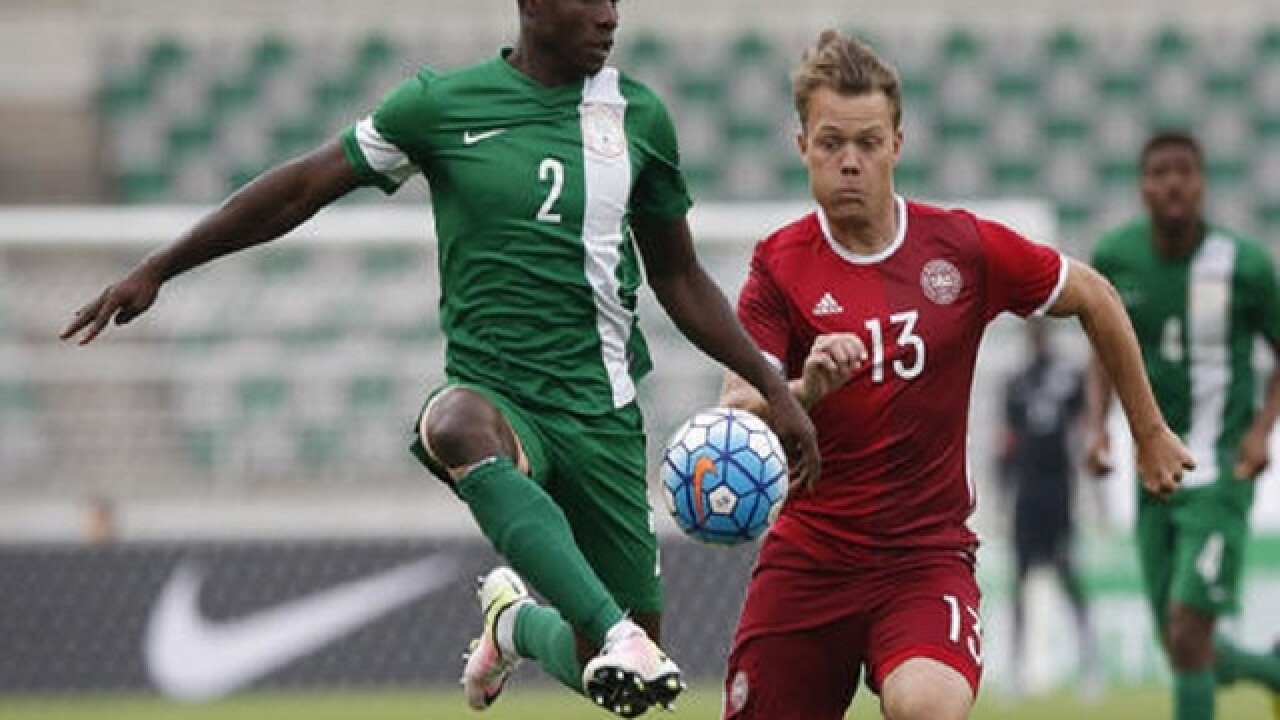 By: Associated Press
Posted at 12:03 AM, Aug 05, 2016
The Nigerian men's soccer team didn't show any fatigue from a last-minute trip that brought the players to Brazil just hours before their Rio Olympics opener, beating Japan 5-4 Thursday night.
A mix-up at the airport forced Nigeria to make a late flight from Atlanta to Brazil. The team arrived in the jungle city of Manaus about six hours before overcoming jet leg and the heat and humidity in the Amazon city to win a thrilling game.
The team's spokesman posted a picture on Twitter of the team boarding the plane with the message "here we go" and later displayed images of members going through immigration and collecting luggage.
The team faced the uncomfortable situation of spending the day of its debut at the Olympics aboard an airplane on a more than six-hour flight and facing a Japan team that was in Brazil for several days preparing for the contest.
There are conflicting reports about how the team ended up in this position.
Bunmi Jinadu, founder of United Soccer Africa, disputed reports that the team missed its original flight because of a money issue between the Nigerian government and a charter company. Delta Air Lines cited a "communications mix-up" that grounded the team's original Friday flight.
Jinadu said the problem stemmed from poor planning and coordination on the part of the Nigerian team in leaving Atlanta, where it has been training to prepare for the games. He said the team had assumed it could simply buy plane tickets to Rio at the last minute — just like Nigerians do in their home country to book travel.
They then encountered a crush of travelers and lack of flights at the busy Atlanta airport, where several Brazil-bound trips were originating. The team thought it had a backup plan on Wednesday, but the plane wasn't big enough to accommodate the team, Jinadu said.
The flight the team finally boarded was on a chartered Delta jet. A spokesperson for Atlanta-based Delta Air Lines said it stepped in to help the team get to its destination — free of charge — after learning of the flight issue.
The plane normally is used to transport NBA teams, and the same aircraft will fly the U.S. men's basketball team back to the U.S. after the Olympics.
Atlanta was the site of Nigeria's greatest soccer triumph as it won the gold medal there in the 1996 Olympics.
"This came to our attention on the 20th anniversary of the Nigerian football team's win at the Atlanta games," said Delta spokesperson Betsy Talton. "Everyone was happy to help them with another miracle by getting them to Manaus."
Jinadu said the mood remained upbeat among the players as they headed to Brazil at the last minute.
"Nigeria has tough skin," he said. "All the players playing on this team know this is their livelihood and they have been overly anxious to get to Rio."
It's not the first time an African soccer team had to make a last-minute flight for a high-profile match in Brazil.
In 2014, Cameroon's World Cup team refused to board a plane to take them to Brazil because of a dispute over bonus payments for the tournament. Their national soccer federation took out a loan to meet their demands, and the team caught a later flight.
Copyright 2016 The Associated Press. All rights reserved. This material may not be published, broadcast, rewritten or redistributed.