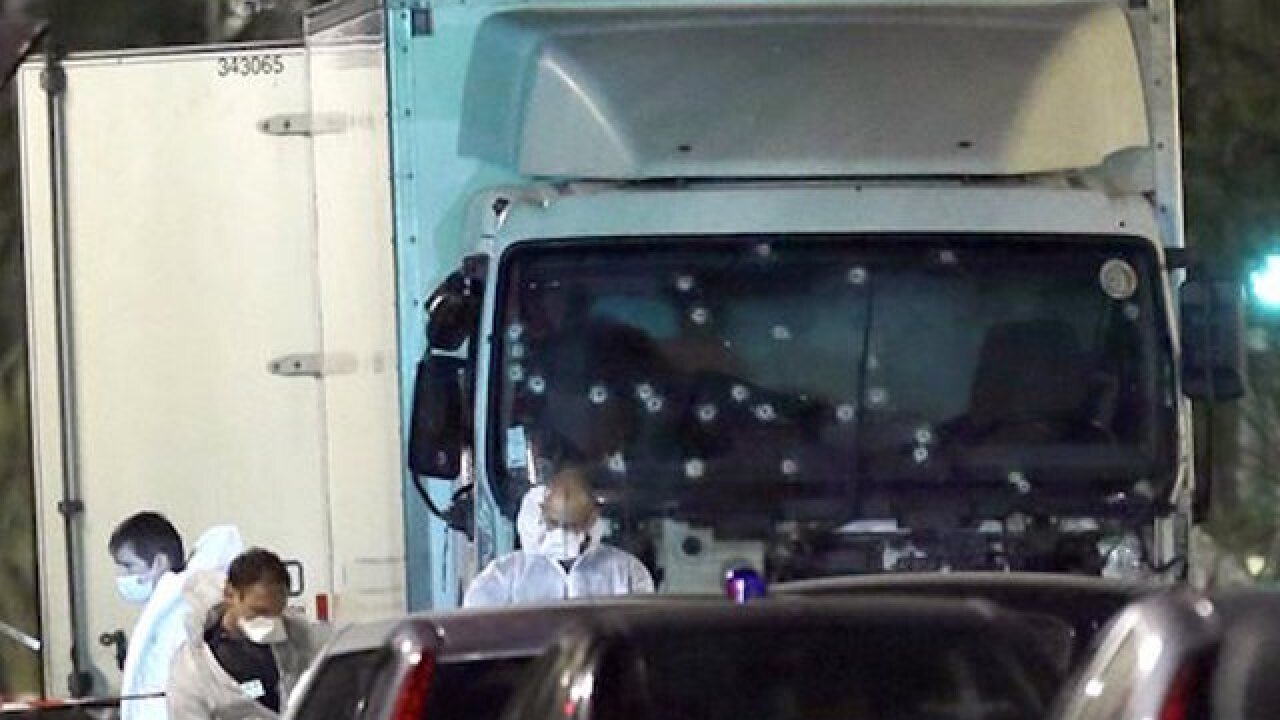 Copyright Associated Press
Claude Paris
<p>Forensic officers stands near a truck with its windscreen riddled with bullets, that plowed through a crowd of revelers who'd gathered to watch the fireworks in the French resort city of Nice, southern France, Friday, July 15, 2016. At least 80 people were killed before police killed the driver, authorities said. (AP Photo/Claude Paris)</p>

NICE, France (AP) — France called up thousands of reserve security forces Friday as authorities tried to determine why a Tunisian deliveryman known only to be a petty criminal took the wheel of a 19-ton truck and plunged through a terrified seaside crowd on Bastille Day, leaving 84 people dead and more than 200 wounded.

Witnesses described how Mohamed Bouhlel barreled his truck in a zigzag path down a crowded Nice promenade, aiming directly for children, for mothers pushing strollers and for families cowering behind plastic benches.

President Francois Hollande extended a national state of emergency that stretched back to the Nov. 13 attacks in Paris that killed 130 people and was claimed by the Islamic State group.

The state of emergency had been due to be scaled back but instead was extended another three months. The government tapped its operational reserve of 25,000 — composed mainly of ex-military or former gendarmes — to relieve its tired officers, stretched by month after month of state-of-emergency policing.

Hollande said the attack was "undeniably terrorist in nature," but prosecutors said the 31-year-old driver who lived in Nice wasn't known to intelligence services.

No group claimed responsibility for Thursday night's slaughter of tourists and locals packing the upscale seafront, where an estimated 30,000 had just watched a Bastille Day fireworks show.

They fanned out to enjoy nighttime street artists, arcade games and food stalls or strolls back to their hotels beside the gentle Mediterranean tide. Then Bouhlel drove his truck into the sidewalk and turned a celebration into a terrifying dash for survival.

Cyril Croisy said he saw the truck accelerate into the first crowds outside Nice's landmark Negresso Hotel, aiming straight for a stand selling candy to children.

He said he tried to help the wounded, including a woman with catastrophic injuries.

"I was there when her heart stopped," said Croisy, his eyes welling with tears as he spoke. The 40-year-old Parisian suffered a broken arm while fleeing the scene and jumping from the pedestrian promenade to the beach below.

Among the dead were immigrants and tourists from many nations, including Algeria, Tunisia, Morocco, Germany, Russia, Ukraine, Switzerland and the United States. Two Scots were among the dozens listed as missing.

French prosecutor Francois Molins said Bouhlel had a loaded handgun, three replica weapons and an empty grenade in the truck, which he had rented three days earlier. Police considered him a petty criminal suspected since 2010 of various threats and acts of theft, vandalism and violent conduct, he said.

In March, he was convicted for a road-rage crime when he struck another motorist with a wooden pallet but received a suspended six-month sentence because it was his first proven offense.

Molins said Bouhlel was "totally unknown to intelligence services ... and was never placed on a watch list for radicalization."

Hollande's government, whose popularity is plumbing record lows in polls, has been buffeted by allegations that France's intelligence services have failed to get a handle on the country's jihadist threat. France has known for years that it is a top Islamic State target, and France also is the biggest source for European recruits for IS, with more than 1,000 fighting in Syria or Iraq.

Hollande, who flew to Nice visit the injured in Pasteur Hospital, declared three days of national mourning from Saturday.

He was booed by angry members of the public as his motorcade passed the scene of the slaughter. Earlier he addressed the nation live on television and sought to provide a rationale for the horror.

"Why Nice?" Hollande asked. "Because it is a city that is known worldwide, one of the most beautiful cities on the planet. Why on the 14th of July? Because it is a celebration of freedom."

It's unclear how quickly the volunteers and part-time professionals will be seen on the streets of Nice or anywhere else after their callup. Interior Ministry officials declined to comment on the timing of the deployment.

Bouhlel's attack was stopped thanks to a handful of police who pursued the truck on foot and, possibly, by motorcycle as he plowed through the first crowds outside the Negresso.

German tourist Richard Gutjahr filmed the truck from his hotel balcony as a suspected police motorcyclist mounted a curb and tried to open the driver's door, only to tumble to the pavement and barely miss being crushed by the wheels. The video showed the unseated motorcyclist continue pursuit on foot, briefly climbing on the side of the accelerating truck, as two officers fired shots from handguns into the truck cabin.

The truck tore into a pedestrian area as the crowd scattered, many leaping from the pathway to the beach below. The truck bore down toward English tourist Simon Coates, who had just lost his wife Amanda in the chaos.

"Within a few seconds it was almost upon me," Coates told the BBC. "I looked to my left and there was an old man, perhaps a grandfather, and a young boy of about 10. The truck aimed straight for them. I leapt one way. The little boy, I don't know how, but he managed to get away from the truck by inches."

Coates said he reluctantly turned to follow the truck to find his wife — and searched among dozens of crushed bodies seeking to identify her from her bicycle or an article of clothing. He couldn't find her before reaching the point where police finally stopped and shot to death the driver barely 20 yards (meters) in front of him.

"The police were screaming to get away. They thought there was a bomb, so I turned around as quickly as I could. The ground was very slippery with what was left of some people," Coates said. "I saw some dreadful things. It was like a chamber of horrors. Every person seemed to have died in an increasingly grotesque way."

Egyptian tourist Nader El Shafei said he tried imploring Bouhlel in Arabic through the attacker's open window to stop what he was doing. Instead, he said, he saw the truck smash into a girl and drag many bodies wedged in its undercarriage.

"I saw the gun in his hand and I saw him shooting through the window," he said. "The police surrounded the car and they kept shooting him until they were sure he's dead."

Watching from his hotel window, English tourist Paul Gordon said he could see the truck bouncing over the bodies of the dead and wounded. "I saw people being knocked over like skittles," said Gordon, who had just left the promenade with his wife and 18-month-old daughter.

Stephane Erbs said he was heading back to his car with his wife, Rachel, and their two children when he saw the truck bearing down on them. He told The Associated Press that his first instinct was to throw his 7-year-old son, Celion, out of harm's way, while his wife pushed their daughter, 12-year-old Noemi, to safety.

"I threw him in the direction of the wall" next to the beach, said Erbs, who broke seven ribs as he tried to get out of the way. His children were unharmed but his wife remained missing Friday.

Coates said he found his unhurt wife, Amanda, after a frantic search of bodies on the path back to his hotel "that was the longest 20 minutes of my life." He said as horrible as the slaughter had been, the placement of a sidewalk-blocking gazebo and the bravery of a handful of armed officers had reduced the potential death toll.

He said the attacker veered wildly from side to side to pick off groups of people "in dribs and drabs," many of them hiding behind plastic benches that splintered into shards. "He'd just mown them down."

The police gunfire kept the attacker from reaching much larger crowds where "hundreds of people could have been killed," he said. "It could have been incalculably worse."

As France and the rest of the world mourned, the Eiffel Tower was bathed in the red, white and blue of the French tricolor — just as it had after the November attacks.

President Barack Obama condemned the attack and, noting it occurred on Bastille Day, praised "the extraordinary resilience and democratic values that have made France an inspiration to the entire world."

Russian President Vladimir Putin says he was "shocked by the violence and exceptional cynicism" of the attack and pledged to work closely with France and other countries to fight terrorism that is "devoid of any human moral."

The 57-nation Organization of Islamic Cooperation — the world's largest Islamic bloc — denounced the violence as barbaric, shocking and brutal.