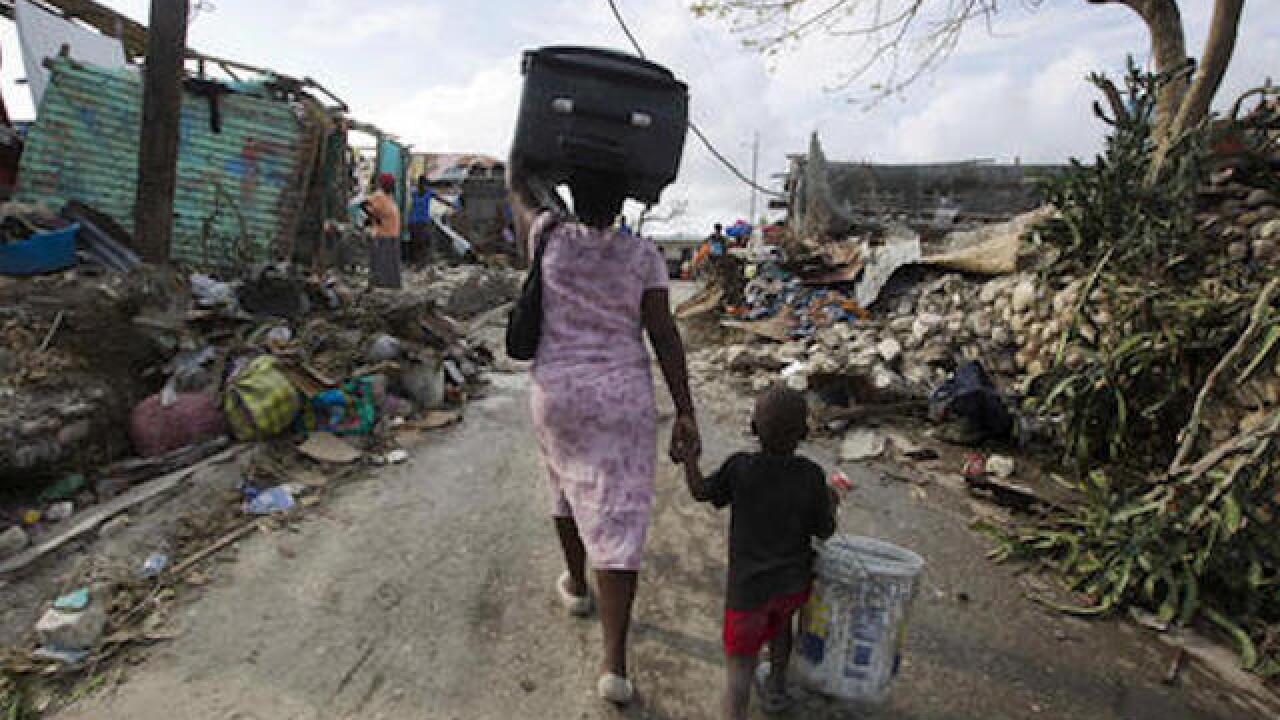 JEREMIE, Haiti (AP) — A small airstrip at the edge of town hums with activity. Aid convoys are arriving from the capital, now that some roads washed out by Hurricane Matthew have been cleared. A barge carrying food and water is moored offshore.

An international response is finally getting underway as Haitian authorities try to gauge the full extent of the staggering blow delivered by Hurricane Matthew, including hundreds dead and tens of thousands of homes obliterated.

The precise death toll remained uncertain Sunday. Guillaume Silvera, a senior official with the Civil Protection Agency in the storm-blasted Grand-Anse Department, which includes Jeremie, said at least 522 deaths were confirmed there alone — not including people in several remote communities still cut off by collapsed roads and bridges.

National Civil Protection headquarters in Port-au-Prince, meanwhile, said Saturday its official count for the whole country was 336, which included 191 deaths in Grand-Anse.

Haiti began three days of formal national mourning on Sunday under a decree issued by President Jocelerme Privert, even as aid began to move toward flattened communities.

"It's beginning to pick up now," said Stephane Rolland, a regional coordinator for the International Federation of the Red Cross, as workers unloaded blankets, soap, bleach and other critical items in Jeremie on Saturday.

The first two cargo planes of humanitarian aid from the United States arrived on Saturday at the Toussaint Louverture airport in the capital Port of Prince. US Ambassador, Peter Mulrean, said that three other planes are expected to arrive in the next few days with a total amount of 480 metric tons of humanitarian supplies.

There are clearly limits, though, including the fact that the airstrip in Jeremie is unable to accommodate large cargo planes, and only operates in the daytime.

Many of the villages in the southwestern peninsula are difficult to reach. And people are growing increasingly desperate after losing everything when the storm ripped through the area on Tuesday.

Dony St Germain, an official with El Shaddai Ministries International, said young men in villages off the road between the southern city of Les Cayes and Jeremie were starting to put up blockades of rocks and broken branches to halt the convoys.

"They are seeing these convoys coming through with supplies and they aren't stopping. They are hungry and thirsty and some are getting angry," said St. Germain.

Government officials estimate that at least 350,000 people need assistance, and concern was growing over an increase in cholera cases following widespread flooding unleashed by Matthew. An ongoing cholera outbreak has already killed roughly 10,000 people and sickened more than 800,000 since 2010, when the infectious disease was introduced into the country's biggest river from a U.N. base where Nepalese peacekeepers were deployed.

Maria Sofia Sanon, a health worker overseeing the open-air cholera treatment center in a corner of Jeremie's main hospital, said they were ill-equipped to deal with patients. The area was strewn with broken tree branches, and a group of young mothers sat outside holding up the arms of their glassy-eyed children being rehydrated via IVs.

"They're not supposed to be in the sun, but we have no more beds," Sanon said.

The World Food Program says there has been massive destruction of crops. Hospitals and clinics have been damaged or destroyed as they struggle to deal with an increase in patients with injuries sustained during the storm as well as an apparent increase in cholera. UNICEF said that in Grand Anse alone there were 66,000 houses destroyed and 20,000 heavily damaged.

"Information gathered from various sources in the field suggests that the human toll (dead and injured) will be heavier than the current official figures," the agency said in a report.

Jocelyne Saint Preux was part of the crowd that lined up in an orderly fashion to get food as aid began to arrive, including shipments of food and other emergency supplies from the U.S. Agency for International Development carried by waves of military transport helicopters.

The mother of three children whose home was destroyed said officials were handing out wheat, beans, oil and salt.

"Yes, they brought food, but it's not sufficient," she said. "There's no water. There's no charcoal."

As aid trickled into Jeremie, Jislene Jean-Baptiste surveyed what remained of the one-room house that the grandmother shares with her three daughters and their children. There wasn't much left. Storm surge flowed across the road and drenched her belongings in waist-deep salt water, washing away the stores of rice and sugar she regularly sold at the market to support her family. Then the wind tore off her roof.

"That storm was the most terrifying thing that ever happened here," she said.