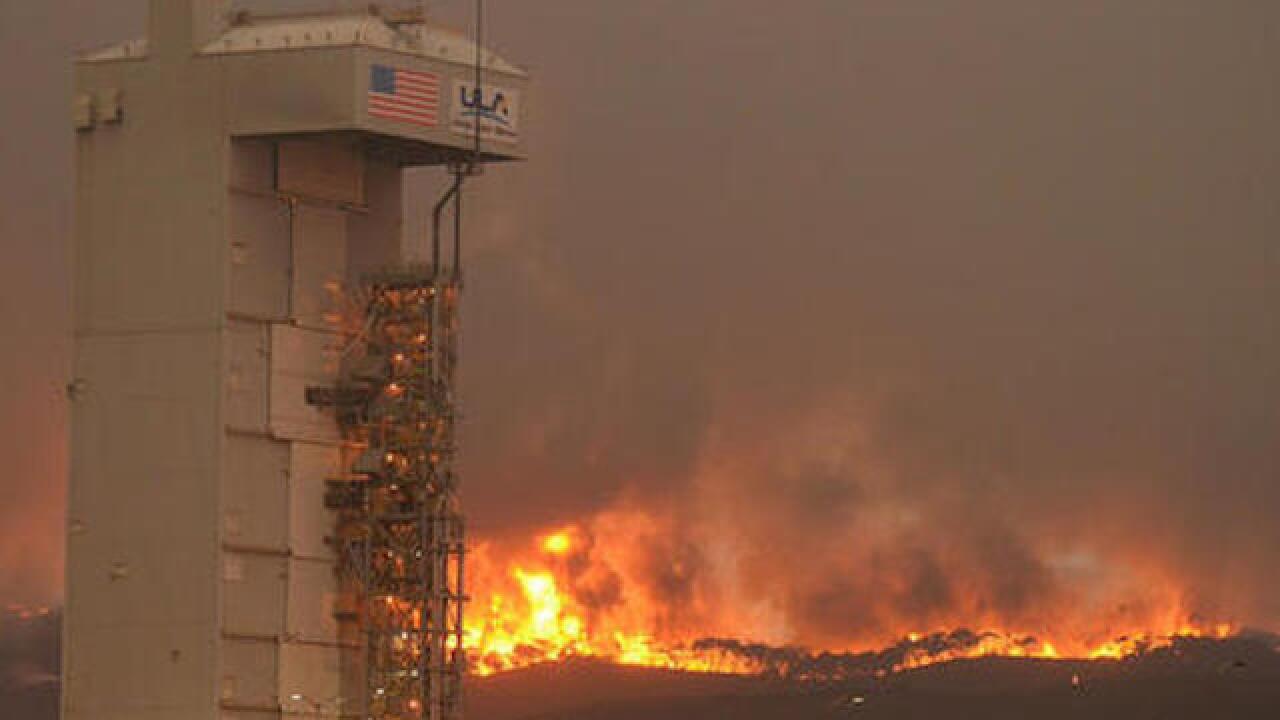 Copyright Associated Press
Mike Eliason
<p>In this Monday, Sept. 19, 2016 photo provided by the Santa Barbara County Fire Department, a fire burns several miles behind Space Launch Complex-3, housing the Atlas V rocket & WorldView 4 satellite, at Vandenberg Air Force Base, Calif. Crews are working to surround the wildfire at the central California Air Force base that forced the postponement of a weekend satellite launch. The blaze has expanded to the south as it grew to more than 16 square miles. (Mike Eliason/Santa Barbara County Fire Department via AP)</p>

LOS ANGELES (AP) — A firefighter among those battling a central California wildfire died Wednesday and another was hurt when the water truck they were in overturned on a highway miles from the fire lines.

The accident happened as firefighting crews gained ground in their effort to contain the 19-square-mile fire on Vandenberg Air Force Base.

The truck crashed just before dawn at a roundabout on Highway 246 about two miles (3.2 kilometers) outside the city of Lompoc, Ventura County Fire Department spokesman Steve Swindle said.

Venture County firefighter Ryan Osler was killed, and Adam Price was injured. There were no other occupants in the truck.

Osler, 38, was a second-generation firefighter whose father worked for the same department. He was married with two children.

Gov. Jerry Brown said in a statement that Osler "dedicated his life to protecting his fellow Californians. This tragedy reminds us of the dangers firefighters face every day."

Osler's father-in-law, Leonard Yniguez, described him as "just the most perfect person. He was always there for everybody."

Osler married Yniguez's daughter, Jennifer, after they graduated from high school in Santa Clarita. He kept a memorial to his father at his home. It included his father's helmet, shoulder patches and a photo of him when he rescued a baby.

"It was in his hallway leading into this master bedroom," Yniguez told the Ventura County Star. "He would see it every night when he went to bed. Now, we have to do it for him."

The California Highway Patrol was investigating the cause of the crash.

Ventura County was among several departments that sent more than 1,000 firefighters to the fire, which was 45 percent contained.

Firefighters focused Wednesday on the blaze's southeast boundary. Voluntary evacuation orders were in place for about 400 residents of the San Miguelito Canyon area.

Officials said the fire did not pose an immediate threat to the base's launch complex that fires satellites into space. Its cause was under investigation.

Vandenberg encompasses nearly 100,000 acres along the Pacific Ocean. A wind-whipped fire in 1977 killed the base commander, the base fire chief, an assistant chief and a bulldozer operator.