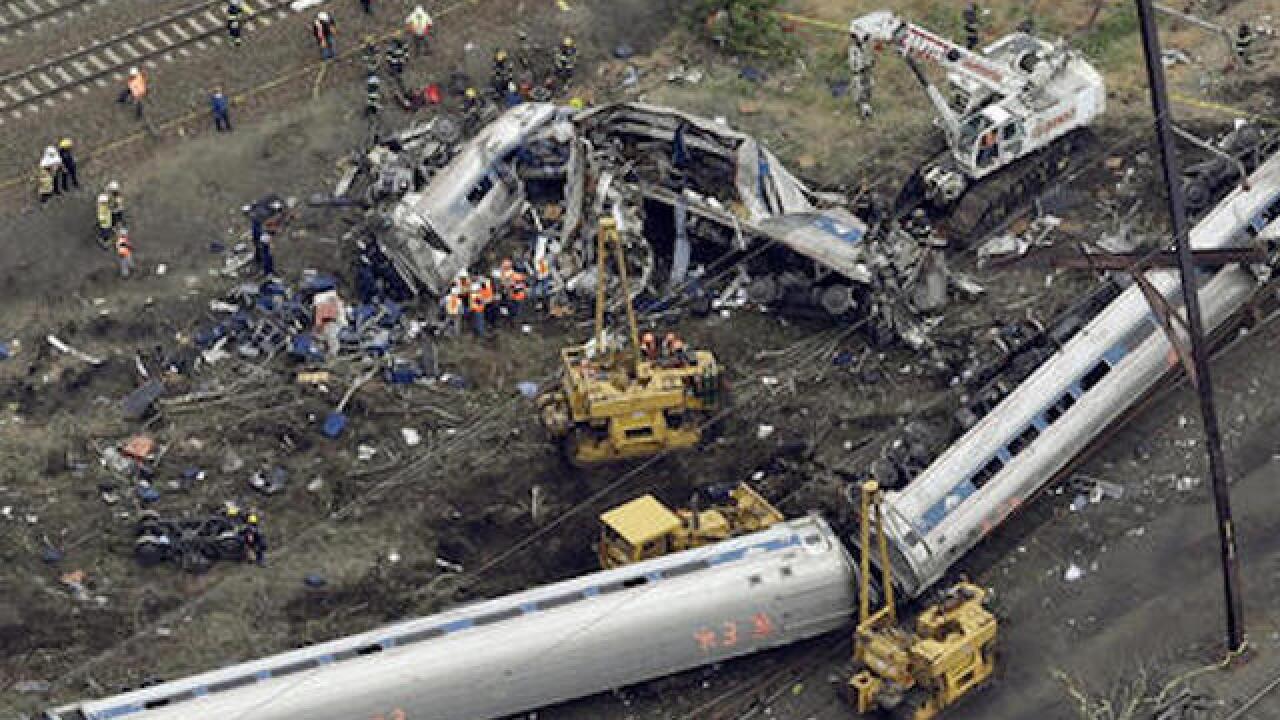 Copyright Associated Press
Patrick Semansky
<p>In this Wednesday, May 13, 2015 file photo, emergency personnel work at the scene of a Tuesday night derailment in Philadelphia of an Amtrak train headed to New York. The National Transportation Safety Board is scheduled to meet Tuesday, May 17, 2016, to detail the probable cause of last year's fatal derailment. (AP Photo/Patrick Semansky, File)</p>

WASHINGTON (AP) — The speeding Amtrak train that crashed in Philadelphia last year, killing eight people, most likely ran off the rails because the engineer was distracted by word of a nearby commuter train getting hit by a rock, federal investigators concluded Tuesday.

The National Transportation Safety Board also put some of the blame on the railroad industry's decades-long delay in installing Positive Train Control, equipment that can automatically slow trains that are going over the speed limit.

Engineer Brandon Bostian was apparently so focused on the rock-throwing incident he heard about over the radio that he lost track of where he was and accelerated to 106 mph as his train went into a sharp curve with a 50 mph speed limit, investigators said at an NTSB hearing convened to pinpoint the cause of the May 12, 2005, tragedy.

"He went, in a matter of seconds, from distraction to disaster," NTSB board member Robert Sumwalt said.

Had Positive Train Control been in use along the stretch of track, "we would not be here today," said Ted Turpin, an NTSB investigator. Such equipment is now in place there and along much of the rest of the Northeast Corridor.

The chain of events also illustrated the potential for tragedy when people throw rocks at trains — a problem railroads are almost powerless to stop but is so common the industry has a term for it: "getting rocked."

Bostian told investigators after the wreck that he remembered radio traffic from a Philadelphia commuter train operator who said a rock had shattered his windshield. He was monitoring the radio traffic until about a minute before his Amtrak train reached 106 mph, said Steve Jenner, another NTSB investigator.

The engineer's full-throttle acceleration would have made sense for someone who thought he had already passed the curve, Jenner said. After the curve, the tracks open up into a straightaway with a speed limit of 110 mph.

Bostian, who has been suspended without pay since the crash for speeding, did not attend the hearing. His attorney didn't return an email sent Monday seeking comment. An Amtrak spokesman said the agency would comment after the hearing.

Bostian had told investigators that he didn't recall what happened between pushing the throttle to pick up speed and then braking when he felt the train going too fast into the curve.

A blow to the head suffered during the wreck probably prevented him remembering what happened, NTSB medical officer Mary Pat McKay. She said he was thrown around the cab of his locomotive when it overturned.

Early in the investigation, the NTSB focused on whether the Amtrak train had been hit with a rock or other projectile minutes before the crash. But investigators confirmed Tuesday that it was not.

Bostian told investigators that he was concerned about the welfare of the commuter train's engineer and "a little bit concerned" for his own safety, but he never indicated in either NTSB interview that his train had been struck, too.

Bostian, known among his friends for his safety-mindedness and love of railroading, apparently commented in an online forum for train enthusiasts on a range of industry issues, including safety. Some of the posts lamented that railroads hadn't been fast enough to adopt Positive Train Control.

Amtrak has installed Positive Train Control on all the track it owns on the Northeast Corridor from Boston to Washington. A 56-mile stretch from New Rochelle, New York, to New Haven, Connecticut, is owned by other entities and is expected to have automatic controls installed by a deadline at the end of 2018.

After the derailment, the train's emergency windows dislodged as the train cars slid on their sides, killing four people who were ejected, according to NTSB investigator Dana Sanzo.

The southbound stretch of track near the accident site had an earlier-generation type of automated control for slowing trains. But the northbound stretch, where the wreck occurred, did not. The more-advanced PTC had been installed on that section but was still being tested when the crash happened.