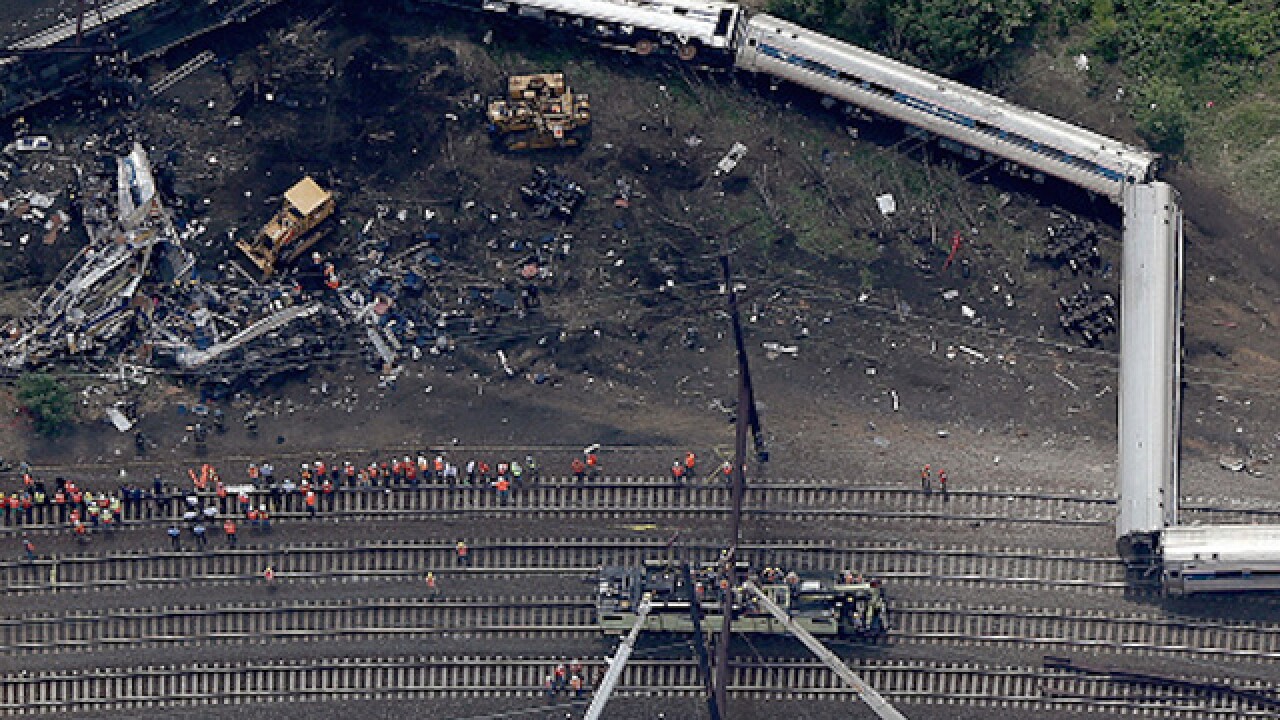 Win McNamee
<p>PHILADELPHIA, PA - MAY 13: Investigators and first responders work near the wreckage of Amtrak Northeast Regional Train 188, from Washington to New York, that derailed yesterday May 13, 2015 in north Philadelphia, Pennsylvania. At least six people were killed and more than 200 others were injured in the crash. (Photo by Win McNamee/Getty Images)</p>

NEW YORK (AP) — The Amtrak engineer whose speeding train jumped the tracks along a curve in Philadelphia last year, killing eight people, was distracted by radio transmissions, a U.S. official briefed on the investigation said Monday.

Engineer Brandon Bostian told investigators three days after the May 12, 2015, crash that he recalled radio traffic that night from a commuter train operator who said a rock had shattered his windshield. The official was unable to say whether those were the transmissions that distracted Bostian, but the engineer spoke about no other radio chatter when interviewed by federal investigators, according to material released previously by the National Transportation Safety Board.

The official was not authorized to comment publicly because the probe is still underway and spoke to The Associated Press on the condition of anonymity.

The revelation comes a day before the NTSB is scheduled to meet Tuesday to detail the probable cause of last year's fatal derailment. The cause won't be determined officially until the board's vote at the conclusion of that meeting.

NTSB spokesman Peter Knudsen said the agency would not comment ahead of Tuesday's hearing.

The official briefed on the report's findings Monday said that investigators also believe there were some issues with the train's emergency windows and several people were killed because they were ejected through those windows.

Investigators are looking into why the train from Washington to New York City was going double the 50 mph limit around a sharp curve about 10 minutes after leaving Philadelphia's 30th Street Station.

Early in the investigation, the NTSB focused on whether the Amtrak train had been hit with a rock or other projectile minutes before the crash.

Bostian told investigators he was concerned about the welfare of the commuter train's engineer and "a little bit concerned" for his own safety, but he never indicated in either NTSB interview that his train had been struck too.

"There's been so many times where I've had reports of rocks that I haven't seen anything, that I felt like it was unlikely that it would impact me," Bostian told investigators, adding that he figured whoever damaged the commuter train had probably left the area by the time he rolled through.

Trains operating in the Northeast are frequent targets of rock-throwing vandals. Other nearby trains reported being hit by rocks that evening not long before the derailment. A grapefruit-sized dent was found in the windshield of Amtrak 188's locomotive.

Bostian, regarded by friends for his safety-mindedness and love of railroading, has been suspended without pay since the crash. A letter from Amtrak in the NTSB files shows he was suspended for speeding.

The lack of clarity on what caused the train to speed has frustrated crash victims, some of whom have racked up millions of dollars in hospital bills and are continuing to rehabilitate from injuries. Dozens have sued Amtrak for compensation.