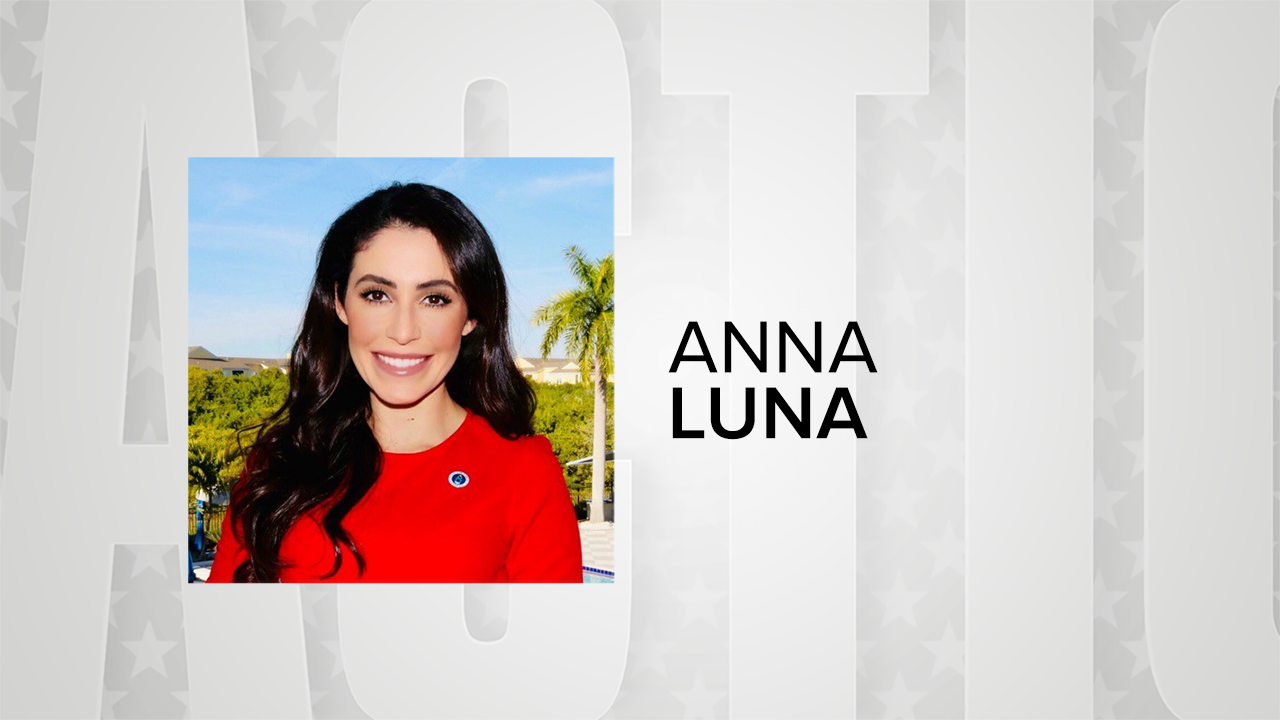 In an effort to help you make informed decisions during the General Election, ABC Action News has reached out to dozens of candidates running for office. The following statements have been submitted to ABC Action News by the candidate. Every candidate was given the same set of questions. These are their responses in his/her own words.

· Chairwoman of Hispanic Initiatives at Prager U

Why should voters vote for you?

I’m a strong, independent leader and with me - what you see is what you get. I’m not a phony career politician that spouts off poll-tested talking points and goes whichever way the political winds blow. I came to my views as a result of hard life experience. As someone who grew up poor, around violence and crime, and was raised by a single-mother, I’ve been through a lot. I joined the military and served my country. My husband, Andy, is a Bronze Star & Purple Heart recipient who was shot in Afghanistan and helped liberate Mosul from Isis. We are real, ordinary Americans who know what it’s like to feel abandoned by leaders in Washington.

I will represent the people. I’m not bought and paid for by special interests and Super PACs. I don’t have lobbyist buddies, and I’m not part of the culture of corruption in Washington D.C. With me, Pinellas County voters get an independent leader with an open ear, who can empathize with them, and will always put their interests first.

If elected, what are your top priorities?

​I experienced firsthand the pitfalls of our veteran care policies after enemy combatants shot my husband Andy in Afghanistan. I will always fight to ensure our veterans that they get the care, appreciation, and honor deserved.

​I want to end the corruption that plagues our system. I will support any ban on Congress or its employees becoming lobbyists to cash out after leaving office. I will also work to enact term limits for elected officials.

​I am determined to ensure our community continues to capitalize on the robust tourism economy. I will fight to protect our beaches, coastlines, and preserve our natural environment, without raising taxes.

What are three key messages of your campaign?

- I am a strong, independent leader whose views are built on life experience, not bought by special interests.

- I want to close the revolving door between Congress and lobbyists and send the corrupt career politicians home for good.

- Pinellas County voters can count on me to always put their best interests first, regardless of which way the political winds blow.

What areas of public policy are you personally passionate about?

As it relates to the role you are seeking, how has that governmental body handled the Covid-19 pandemic? What would you do differently/the same in handling both the public health risk and the economic recovery?

The stimulus bills had plenty of unnecessary pork spending that wasn’t for COVID so much as handing out special deals to connected lobbyists and special interest groups. Some of the measures passed were very good and appropriate, such as the PPP loan and many others. But Congress continues to tie wasteful spending and dirty deals to good policy so they can push their lobbyist handouts through while the public is scared or not paying attention. It happens with every crisis – Congress lets lobbyists hijack the spending and the response. That’s a problem.

I would stand up to this way of legislating. Ordinary men and women who could use help from their government and leaders are continually shortchanged in favor of lobbyists, special interests, and political considerations. It must end.

In the role you are seeking, what will you do to address issues of racism and inequality?

Just like every other country in the world, America has dealt with issues of racism and inequality. However, thanks to the principles which America was founded on, minorities have been given the best chance to succeed and thrive in their calling by being a part of this country. I am an incredibly grateful beneficiary of that system and proof that it exists and works. The number one inequality in this country is access to a high-quality education. The education gap leads to disparate job opportunities and a perpetuation of the cycle of poverty. We must abandon the policies that have allowed these disparities to grow and begin to do what works. That means supporting school choice so every child can access a great education, that means promoting and supporting the family unit, that means removing barriers to entry in the economy and job market. We know what our problems are, and we largely know what works and what hasn’t worked – but politicians, like Charlie Crist are too concerned with party politics to stand up for the truth and buckle down to get things done.

What motivates you to run for public office?

The American dream. By the grace of God, I have been able to succeed and now lead a good life – thanks only to the opportunity that America provides. I want to serve as an example for my generation and the generations behind me – to prove to them you can be born into tough circumstances, with nothing, but still work your way out and achieve greatly. And I want to serve the people in my community. I want to make a real, positive impact for as many people as I can because I know what it’s like to need help.