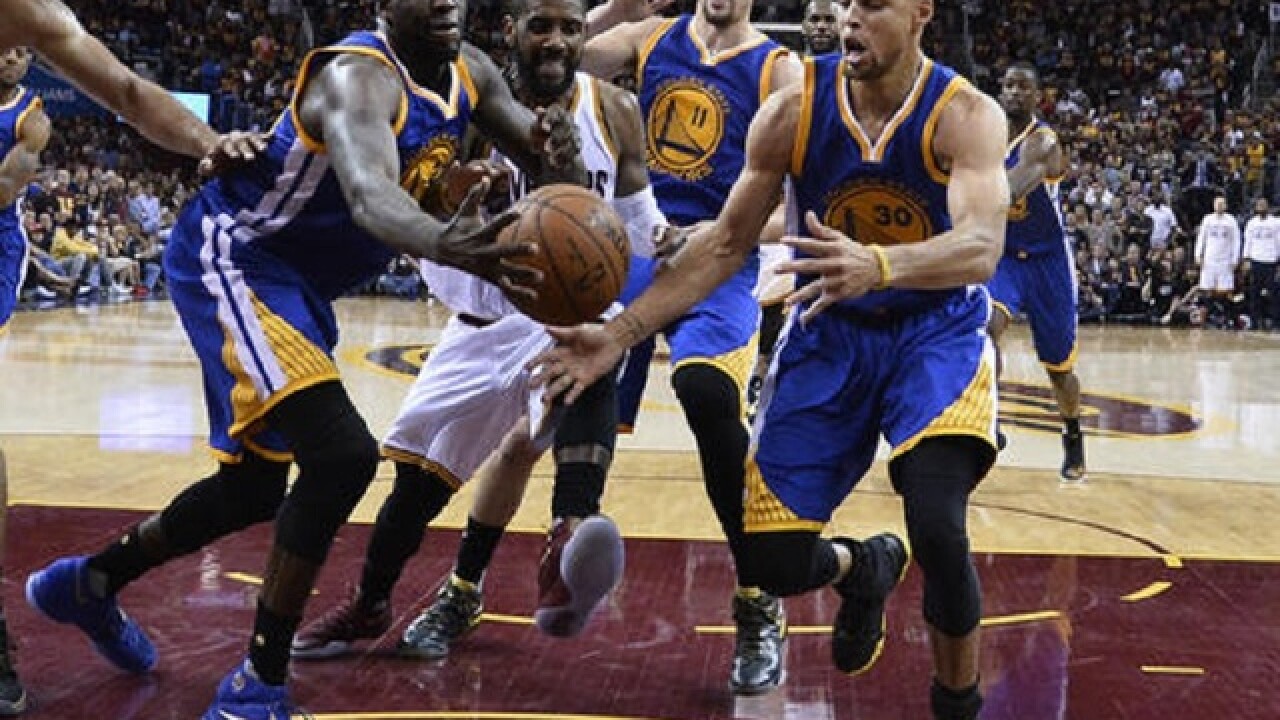 OAKLAND, Calif. (AP) — Suspended Golden State Warriors star Draymond Green watched Game 5 of the NBA Finals on Monday night in a baseball suite next door to Oracle Arena at the Oakland Coliseum, where the Athletics hosted the Texas Rangers.
Supportive general manager Bob Myers kept him company.
The Warriors said Green changed his mind several times Monday morning before deciding on where to view the potential clincher. The A's even extended Green an invitation to throw out the ceremonial first pitch, but he declined.
"He would like to keep a low profile," A's spokeswoman Catherine Aker said.
Oakland manager Bob Melvin offered up his office as a quiet spot to watch the game.
The defending champion Warriors held a 3-1 lead against LeBron James and Cleveland and were trying to close out a second straight title against the Cavaliers — this time in front of their raucous home fans.
The wound-up crowd chanted "Free Dray-mond! Free Dray-mond!" and large cutouts of Green's face waved from all corners of the arena. A #FreeDray hash tag was born.
Golden State owner Joe Lacob even wore Green's No. 23 jersey in solidarity.
"It's another test," guard Shaun Livingston said of playing without emotional leader Green. "We've went through a lot of tests this year. It's kind of the ultimate being in the position that we're in, so it's a great opportunity for a lot of guys and for our team and coaches.
"It's a cohesion thing throughout the whole team. We rely on our chemistry, we rely on each other, we play for each other. One guy is not just going to make up what Draymond brings to the table. It's all the little things he does that wins championships."
Green was suspended by the NBA on Sunday for a fourth-quarter scuffle with James in Game 4, during which the league said Green "made unnecessary contact with a retaliatory swipe of his hand to the groin" of James. Green was issued a retroactive Flagrant-1 foul for his fourth flagrant point of the postseason, drawing an automatic suspension. He was sitting out for only the second time all season, and the Warriors lost 112-110 at Denver five months earlier the last time without him back on Jan. 13 when he had a night off to rest.
James said Green's trash talk also went "a little bit outside of basketball."
After Monday's game, Green will be allowed to enter Oracle Arena to either celebrate with his teammates or prepare for a trip to Ohio for Game 6. Hallways connect the side-by-side venues, providing Green an ideal option to stay close by.
"We have to make up for his absence collectively," coach Steve Kerr said before the game. "There is not one person who can do all of that, but we're going to have to try a lot of different combinations and try to find rotations that work. We haven't played without Draymond much at all the last couple of years, so it will be different. But our guys are ready for it, and we have a lot of people who can help."
Smiling and being playful, Green was his upbeat, high-energy self — or at least appeared so — during a shootaround Monday morning at the team's downtown practice facility. He pulled off a set of pushups between taking shots, let out a loud "Ahhhhh!" for all to hear and animatedly pointed his right arm in the direction of center Andrew Bogut before disappearing as the Warriors wrapped up their day-of-game preparations.
While Kerr advised all of his players to stay ready because there might be some varying lineups and rotations, Livingston said Green hadn't addressed the team. There's a lot of production to make up for without Green's postseason 15.3 points, team-high 9.6 rebounds and six assists — not to mention his defense.
"It's tough. He's in a different position now," Livingston said. "Usually he's able to be vocal and then go out and then go out and set the example. Now with him not playing, it's kind of speaking from a different position. Steve has been great kind of feeding us what we need. I don't think we should need any extra motivation tonight."
Copyright 2016 The Associated Press. All rights reserved. This material may not be published, broadcast, rewritten or redistributed.