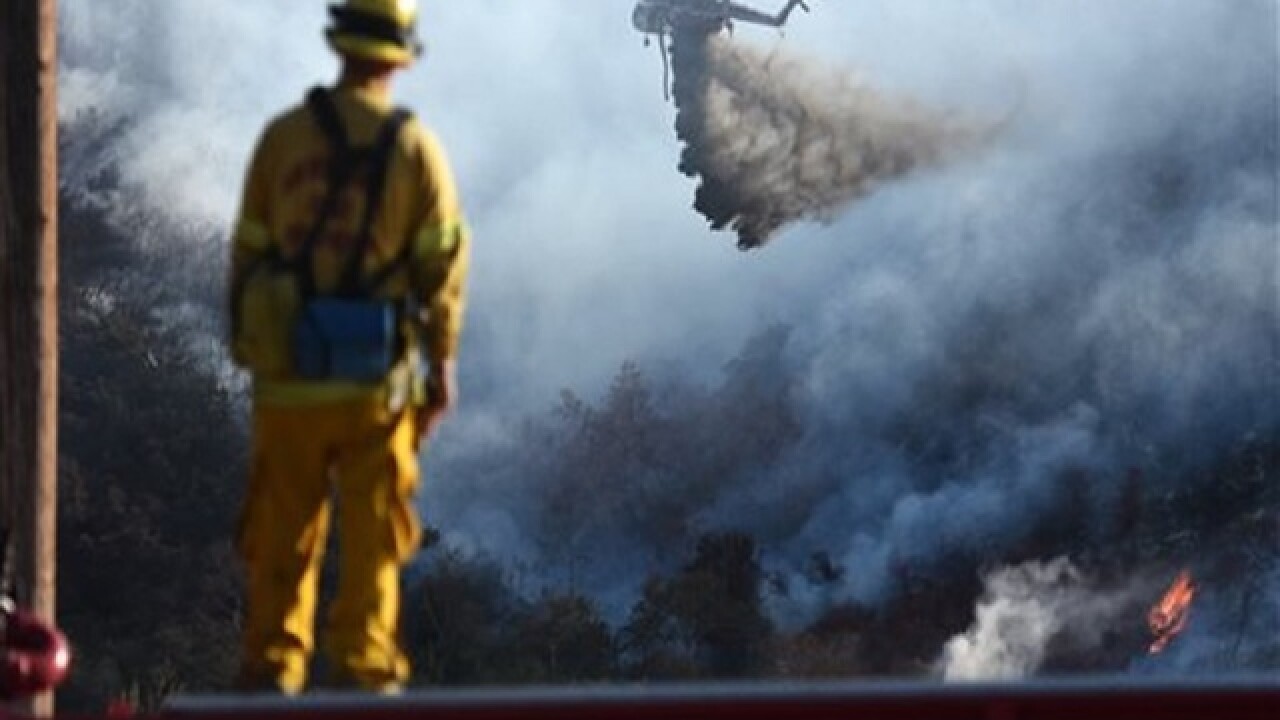 SAN BERNARDINO, Calif. (AP) — Lisa Gregory has kept a close eye on the weather since fleeing her home in the woods as a wildfire advanced in Southern California. She doesn't know when she can return or whether her house was still standing.
The uncertainty "is an awful feeling," Gregory said as she lounged in a lawn chair under a tree outside an evacuation center.
Firefighters made major gains Thursday against the wildfire that broke out Tuesday in the mountains and desert 60 miles east of Los Angeles. Driven by wind and low humidity, the fire chewed through tall grasses and drought-parched shrubs, torching an unknown number of homes and vehicles.
The 59-square-mile blaze was 22 percent contained, and a small number of evacuees on the fire's east side where the containment line was were allowed to return home.
Some 82,000 residents were under evacuation orders at the height of the fire.
Crews fanned out across fire-ravaged zones to begin inspecting the damage, but many places were still too dangerous to enter.
"Right now the fire is just too hot in most of these areas," said U.S. Forest Service spokesman Jake Rodriguez.
Charmy Hartinger said it has been a "rollercoaster" since she got off work and realized she couldn't go home. After staying in a hotel with her sister, she arrived at the evacuation center to join her neighbor.
"I just want to know if I have a house," she said.
Meanwhile, a new fire broke out in rural Santa Barbara County, quickly surging to about 500 acres and prompting the evacuation of a pair of campgrounds.
Another blaze near Lake Isabella in Kern and Tulare counties in the center of the state had burned more than two square miles.
During five years of drought, California's wildlands have seen a continuous streak of destructive and sometimes deadly fires. No deaths have been reported in the latest fire, but crews assessing property damage were using cadaver dogs during searches.
The dry vegetation is like firewood, said fire information officer Sean Collins.
"It burns that much quicker, that much hotter. The rate of travel is extremely fast," he said.
Wildfires across the country in recent years have grown more ferocious and expensive to fight.
Last year's fire season set a record with more than 15,625 square miles of land charred. It was also the costliest on record with $2.1 billion spent to fight fires from Alaska to Florida.
Experts have blamed several factors including rising temperatures that more quickly dry out forests and vegetation. Decades of aggressively knocking down small fires also have led to the buildup of flammable fuel. On top of that, more people are moving into fire-prone regions, complicating firefighting efforts.
The Southern California fire unleashed its initial fury on a semi-rural landscape dotted with small ranches and homes in Cajon Pass and on the edge of the Mojave Desert before climbing the mountains.
Travel was returning to normal in the pass — a major corridor for trucking, rail and commuter traffic — after Interstate 15 was fully reopened.
In mountains north of San Francisco, a 6-square-mile blaze was 55 percent contained after destroying at least 268 structures, including 175 homes and eight businesses, in the working-class community of Lower Lake.
The equipment manager, or "armorer," of the U.S. Olympic fencing team, was among those who lost their homes. Matthew Porter was in Rio with the medal-winning team when the house burned.
Copyright 2016 The Associated Press. All rights reserved. This material may not be published, broadcast, rewritten or redistributed.