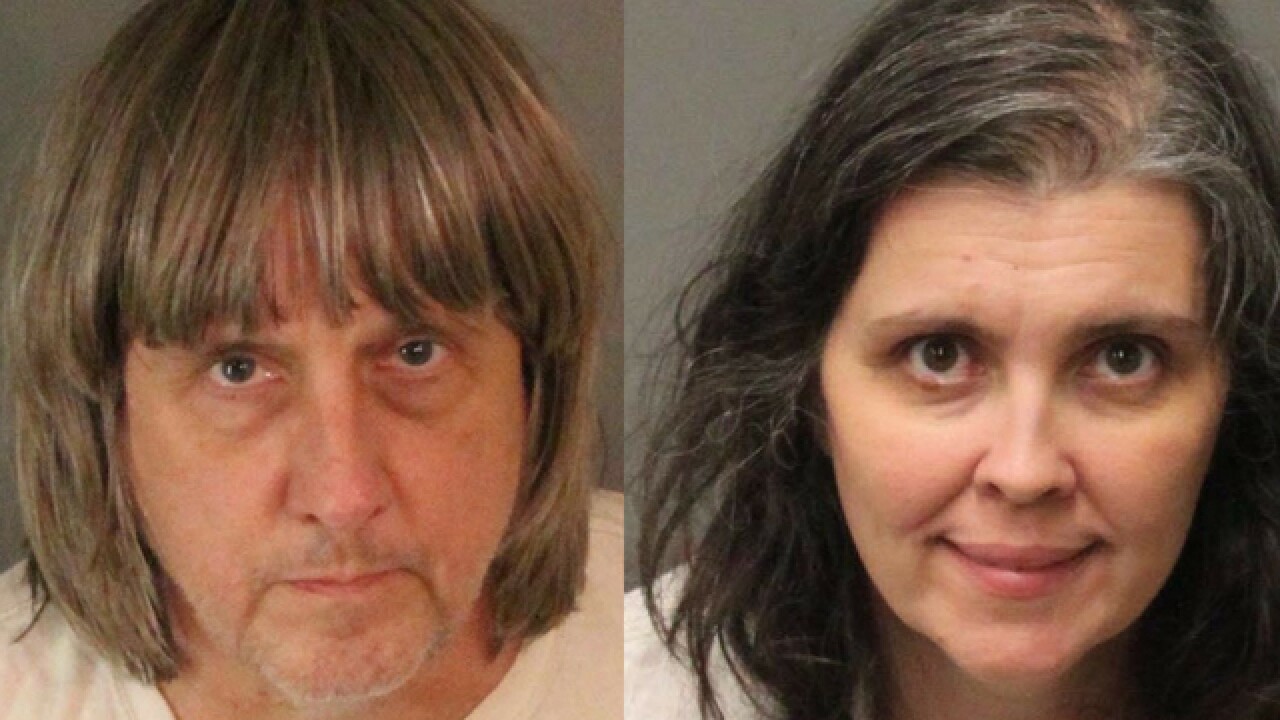 David Turpin and Louise Turpin, the California couple accused of holding their 13 children captive and torturing all but one, are facing additional charges, a prosecution spokesman said Friday.

"Further investigation led us to this," Hall said.

Both defendants appeared before the judge in suits, the husband in gray, the wife in navy blue. David Turpin's hair appeared to be trimmed and neater around the collar.

The next court date in the case is March 23, to go over the status of proceedings. May 14 has been set aside tentatively for the preliminary hearing.

Lawyers for the Turpins walked away briskly, with David Macher, David Turpin's attorney, answering a string of questions with "I can't comment on that." He reiterated that both clients pleaded not guilty to the new charges and that "a lot of evidence" exists, likely postponing the preliminary hearing.

The Turpins allegedly shackled some of their children to beds in a nondescript Riverside County home that doubled as the private Sandcastle Day School.

But the home school with the inviting name concealed a life of horror and abuse, where the children were beaten and starved, chained to their beds for weeks at a time and allowed to shower once a year, according to Riverside County District Attorney Mike Hestrin.

The Turpins are accused of beating and choking some of their children, who are between 2 and 29 years old. Prosecutors have not alleged the 2-year-old was tortured. The couple allegedly deprived the children of water and fed them small portions of food on a strict schedule.

The 29-year-old weighed just 82 pounds and the other children are so thin they look younger than their ages, authorities said.

Before Friday's developments, officials said the Turpins could face a maximum sentence of between 94 years and life in prison, so the new charges do not.

The disturbing case has moved people around the world to donate about $570,000 to support the children's medical expenses and education, according to Erin Phillips, a spokeswoman for the Riverside University Health System.

"In cases like this there are long-term needs like behavioral health, housing, scholarships, educational support, tutors and medical needs," she said.

A fund launched by the hospital, where the younger siblings were treated, has collected $370,000, including $38,000 from the city of Perris, Phillips said. A fundraiser started by the Corona Chamber of Commerce has received about $200,000 in monetary donations after collecting enough clothing, hygiene items and toys to meet the immediate needs of the siblings.

"It's been amazing the outpouring of love and sentiments," Phillips said. "It reminds us there is so much light in this world in contrast to such a dark case."

A state court judge last month barred the Turpins from directly contacting their children and other potential witnesses in the case for the next three years.

The Turpins are still in custody. A judge set bail at $12 million for each defendant.

The charges against the couple cover the time the Turpins lived in Riverside County, from 2010 to the present.

The process to terminate parental rights will be determined in dependency court, and birth parents have the right to contest the termination, officials have said.

The horrid living conditions the children were subjected to led one sibling, a 17-year-old girl, to escape through a window of the family home last month. She called 911 from a deactivated cellphone she found in the house. She had planned her escape for more than two years.

The only thing the homeschooled children were allowed to do while in their rooms was write in journals, Hestrin said. Hundreds of the notebooks are being examined for evidence against the parents.

Caleb Mason, an attorney for the older Turpin siblings, said Friday that "our clients are doing very well in their recovery."

"We are grateful for the extraordinary generosity and goodwill of the many people who have gone above and beyond to help them," Mason said in a statement.