Study says COVID-19 patients were more likely to die when given chloroquine, hydroxychloroquine 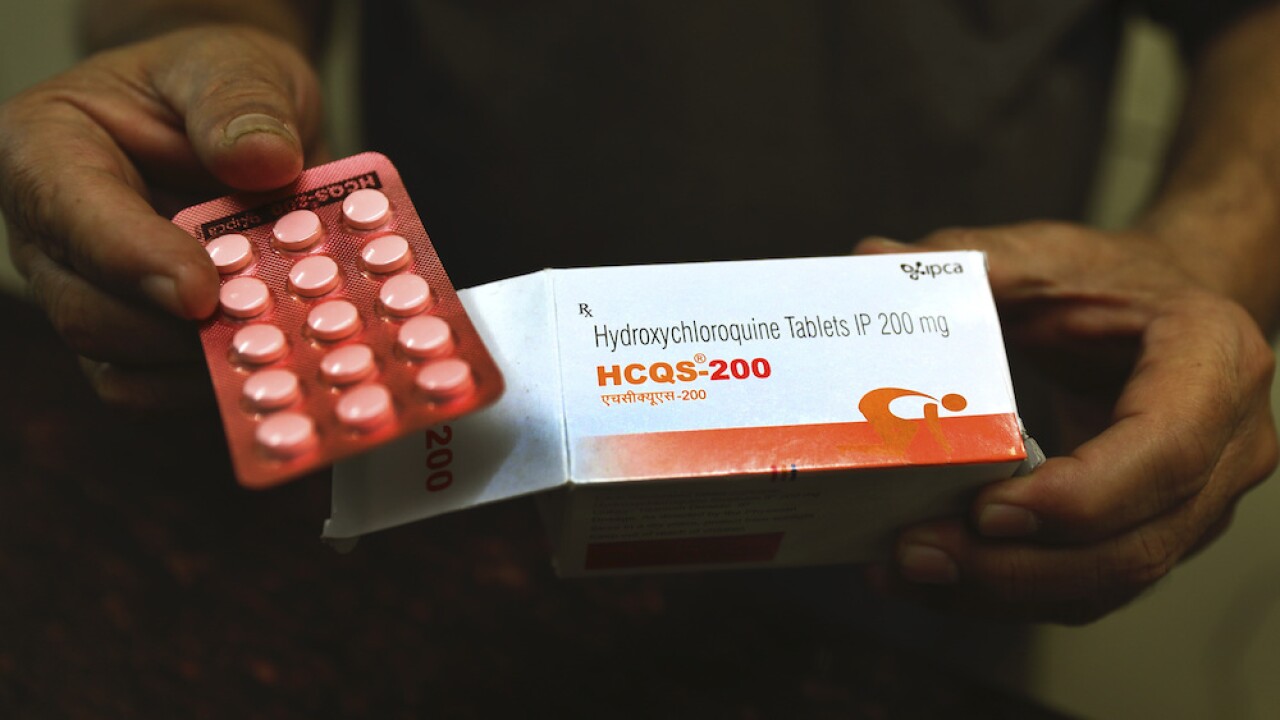 Copyright 2020 The Associated Press. All rights reserved.
Manish Swarup/AP
FILE - In this Thursday, April 9, 2020 file photo, a chemist displays hydroxychloroquine tablets in New Delhi, India. Scientists in Brazil have stopped part of a study of the malaria drug touted as a possible coronavirus treatment after heart rhythm problems developed in one-quarter of people given the higher of two doses being tested. Chloroquine and a similar drug, hydroxychloroquine, have been pushed by President Donald Trump after some early tests suggested the drugs might curb coronavirus entering cells. (AP Photo/Manish Swarup, File)

Editor's note: In the weeks after this study was published, three of its authors called for its retraction, citing issues with the data set. More information on the retraction can be found here. Below is the original version of this story, as published on May 22.

A new study published Friday says COVID-19 patients who were treated using chloroquine or hydroxychloroquine — a drug touted by President Donald Trump as a cure for the coronavirus — were more likely to die than those who did not take the drug.

The study, which was published by the medical journal The Lancet, tracked data from 671 hospitals around the world between late December and mid-April. It found that those who were treated with chloroquine, hydroxychloroquine through four methods all died at a higher rate than those who did not received the drug.

The study accounted for several "confounding factors," like, age, sex, race or ethnicity, body-mass index. When taking those factors into account, the study found that the mortality rate for the group that did not take the drug was 9.3 percent. It also found that:

More than 96,000 people, all of whom had been hospitalized with COVID-19, were included in the study. About 14,000 of which received one of four drug cocktails that included chloroquine or hydroxychloroquine.

"We were unable to confirm a benefit of hydroxychloroquine or chloroquine, when used alone or with a macrolide, on in-hospital outcomes for COVID-19," the study concluded.

The study is among the largest that have been conducted regarding the effectiveness of chloroquine and hydroxychloroquine in treating COVID-19. One of the widest-cited studies that touts the drug's effectiveness against the coronavirus included a sample of 97 patients and a control of 84 patients.

The FDA has already urged against the use of the drug in treating COVID-19 outside of a hospital setting.

Despite the recommendations set forth by his own administration, Trump told reporters this week that he is taking hydroxychloroquine as a preventative measure against COVID-19.

"I started taking it, because I think it's good," Trump said. "I've heard a lot of good stories."

Trump's White House physician later released a statement, saying that the "benefit outweighed the potential risks" of the drug.

Chloroquine and hydroxychloroquine were developed as anti-malarial drugs, but have since been used to treat arthritis and lupus.