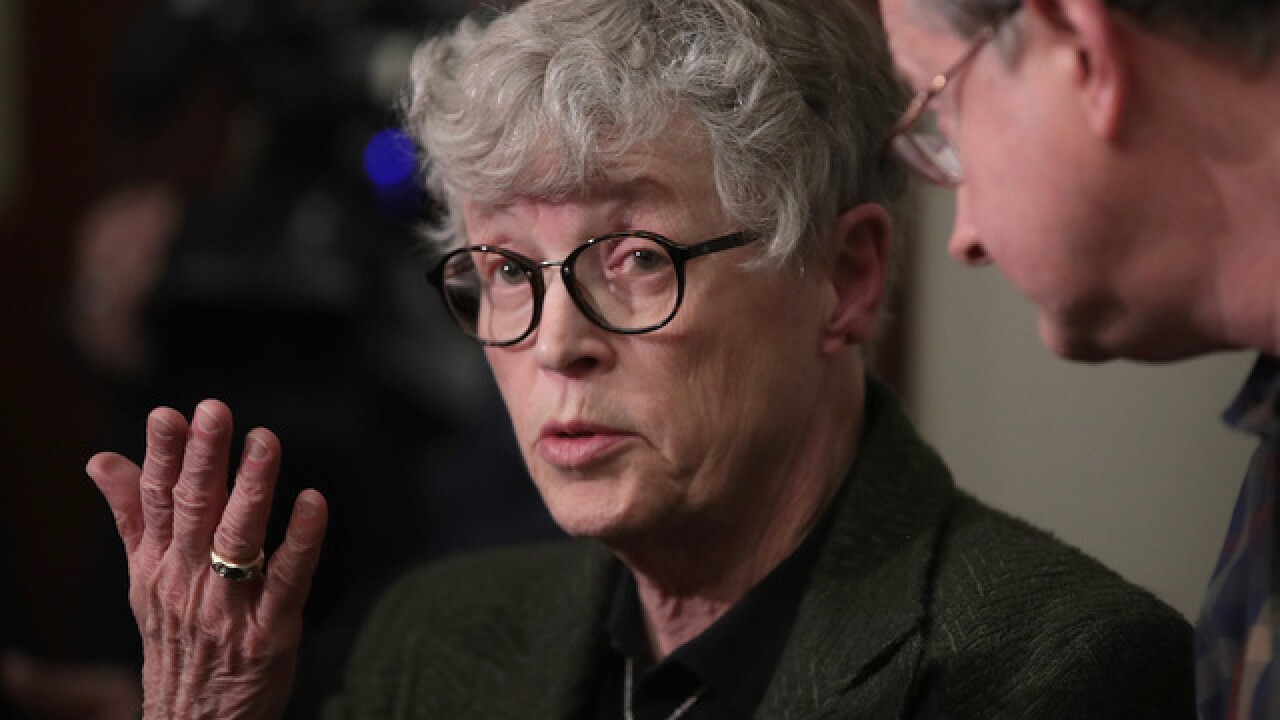 Copyright Getty Images
Scott Olson
<p>LANSING, MI - JANUARY 17: Michigan State University (MSU) President Lou Anna Simon answers a question after being confronted by former MSU gymnast Lidsey Lemke during a break in the sentencing hearing for Larry Nassar who has been accused of molesting more than 100 girls while he was a physician for USA Gymnastics and Michigan State University where he had his sports-medicine practice on January 17, 2018 in Lansing, Michigan. (Photo by Scott Olson/Getty Images)</p>

The Michigan State University president who resigned in the wake of the Larry Nassar sexual abuse scandal has the option of returning to the faculty and securing lifetime perks, her contract says.

Lou Anna Simon can elect to return to a faculty position and take a 12-month research leave during which time she would be paid her current $750,000 salary, according to the contract, provided to CNN by Michigan State spokesman Jason Cody.

Simon had come under fire for what critics say is the mishandling of the Nassar scandal. Critics say the school's leader of 13 years had been tone-deaf and needs to be among those held accountable for what happened while Nassar was a sports physician at the university from 1997 to 2016.

Nassar, the former USA Gymnastics and Michigan State doctor, was sentenced Wednesday to up to 175 years in prison for the sexual assault of young female athletes.

"As tragedies are politicized, blame is inevitable. As president, it is only natural that I am the focus of this anger," Simon said in her resignation letter Wednesday.

"Throughout my career, I have worked very hard to put Team MSU first. Throughout my career, I have consistently and persistently spoken and worked on behalf of Team MSU. I have tried to make it not about me. I urge those who have supported my work to understand that I cannot make it about me now. Therefore, I am tendering my resignation as president according to the terms of my employment agreement."

If she chooses to return to the faculty, the contract says, Simon would be paid her current salary for the first year and then 75% of her salary for the "second and subsequent years."

"The President will be provided with a suitable office in a mutually agreeable University building, secretarial services, appropriate computer and technology equipment, technical support, a telephone, and other office tools appropriate to her work as a facility member," the contract says.

According to her curriculum vitae , Simon has a bachelor of arts in mathematics and a master of science (student personnel and counseling) from Indiana State University and a doctorate in higher education from Michigan State.

Simon would also receive numerous lifetime benefits, including the title of president emeritus, complimentary tickets to events such as home football games and home women's basketball games, and parking passes..

Simon is required to function as the school's president for 60 days from the time of her resignation and provide "reasonable assistance" for the transition to the next president.

The chairman of the university's Board of Trustees said the group had accepted Simon's resignation and will work out the details of her departure over the rest of the week.

"We greatly appreciate her integrity, her many contributions, and her willingness to continue to serve through transition," Brian Breslin said i n a statement posted below Simon's on the Michigan State website. "We agree with Dr. Simon that it is now time for change."