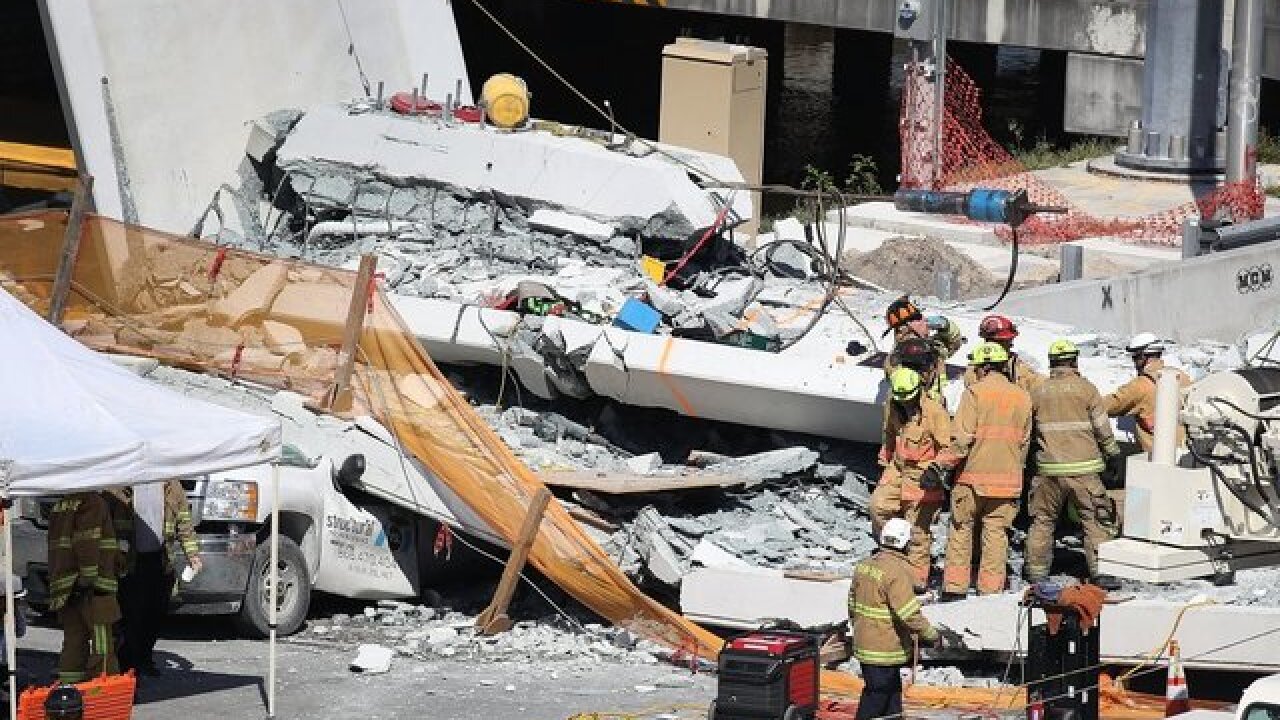 As investigators seek to determine the cause of the Miami bridge collapse on Thursday that killed six people, attention has turned to the companies involved in the $14.2 million construction project.

Records show that a construction company -- Munilla Construction Management, or MCM -- has done extensive work for the government and that some of its projects have come under scrutiny from safety officials.

Here's what we know:

The family-owned MCM is a prominent and politically connected corporation in South Florida. It boasts on its website of over 30 years' experience in the construction industry.

In response to the tragedy, the company said in a written statement that it was "fully cooperating" with a National Transportation Safety Board investigation into the bridge collapse at Florida International University.

"Our thoughts are with the families and victims," the statement read. "Safety has always been our number one priority. We are just heartbroken."

11 OSHA complaints and a lawsuit

A spokesman for MCM told CNN the company has had $152 million in federally funded government projects in the past five years. Federal contract data shows that since 2013, MCM has been awarded about $130 million worth of contracts from the Army and Navy for various construction, maintenance and repair projects. And documents show it was involved in bridge projects nationwide.

At least one MCM project resulted in a lawsuit concerning safety, CNN has learned. Records show the Occupational Safety and Health Administration cited MCM for 11 violations involving construction projects in Miami and Hialeah, Florida, between 2014 and 2017.

The OSHA violations, which resulted in more than $50,000 in penalties, included citations for employees not receiving proper hazardous-chemicals training before handling concrete, not removing water from excavations and not wearing safety glasses and protective gloves, documents show.

A February 2017 OSHA inspection found an employee received "electrical shock and burns" after a tool he was using touched overhead power lines.

A lawsuit filed against MCM on March 5 accused the company of negligence across a "makeshift bridge walkway" that collapsed in the Fort Lauderdale-Hollywood International Airport in October 2016 as a man walked across it.

The man, a TSA worker, slipped forward and broke multiple bones, according to the complaint. MCM "failed to properly maintain and examine the makeshift bridge walkway to make sure they were safe and strong enough to support the weight of an adult," the lawsuit alleged.

MCM, which was awarded a $128 million contract for a terminal expansion project at the airport, has not yet responded in court to the allegations.

An MCM spokesman told CNN this was a trip-and-fall accident involving a piece of plywood covering a sidewalk, not a bridge, so this case has no similarity to the Miami bridge collapse. The TSA employee's attorney, Tesha Allison, told CNN that workers at the airport had repeatedly complained that the temporary walkway was unstable.

Pedro Munilla has a relationship with numerous elected officials, according to the Miami Herald. He was on the phone with Miami-Dade Mayor Carlos Gimenez hours after the bridge collapse, the newspaper said. The Herald also reported that one of Gimenez's sons, C.J. Gimenez, has previously registered to lobby for MCM. Another of the mayor's sons, Julio Gimenez, also used to work for MCM as a construction executive, according to the newspaper.

It's not unusual for prominent construction companies to contribute to politicians, and the bridge was a federally funded project.

Another company involved in the FIU bridge project was engineering design firm FIGG, which has its headquarters in Tallahassee. The company's website says it's known for being a pioneer in artful bridge design since 1978.

FIGG had one project since 2000 that was cited for safety violations, according to the OSHA database. The violations were not detailed.

The violations were related to a June 2012 incident in which a 52 foot-long, 10-foot-wide portion of a bridge in Chesapeake, Virginia, that FIGG was working on collapsed onto a railroad, according to a lawsuit the Norfolk and Portsmouth Belt Line Railroad Company filed against FIGG.

According to federal safety records, FIGG was fined $9,800.

FIGG Bridge Group spokeswoman Jenna Sarkissian told CNN the company isn't giving interviews but responded in writing to questions CNN posed. She said the company will fully cooperate with every authority reviewing what happened and why.

She called the collapse an "unprecedented event" and wrote that "no other bridge designed by FIGG Bridge Engineers has ever experienced such a collapse."

FIGG has worked on more than 230 bridges throughout the United States, and has designed nearly 35 miles of bridges in the southeastern Atlantic and Gulf of Mexico that have withstood multiple hurricanes, she said, adding that all FIGG's bridges are inspected every two years by state departments of transportation.