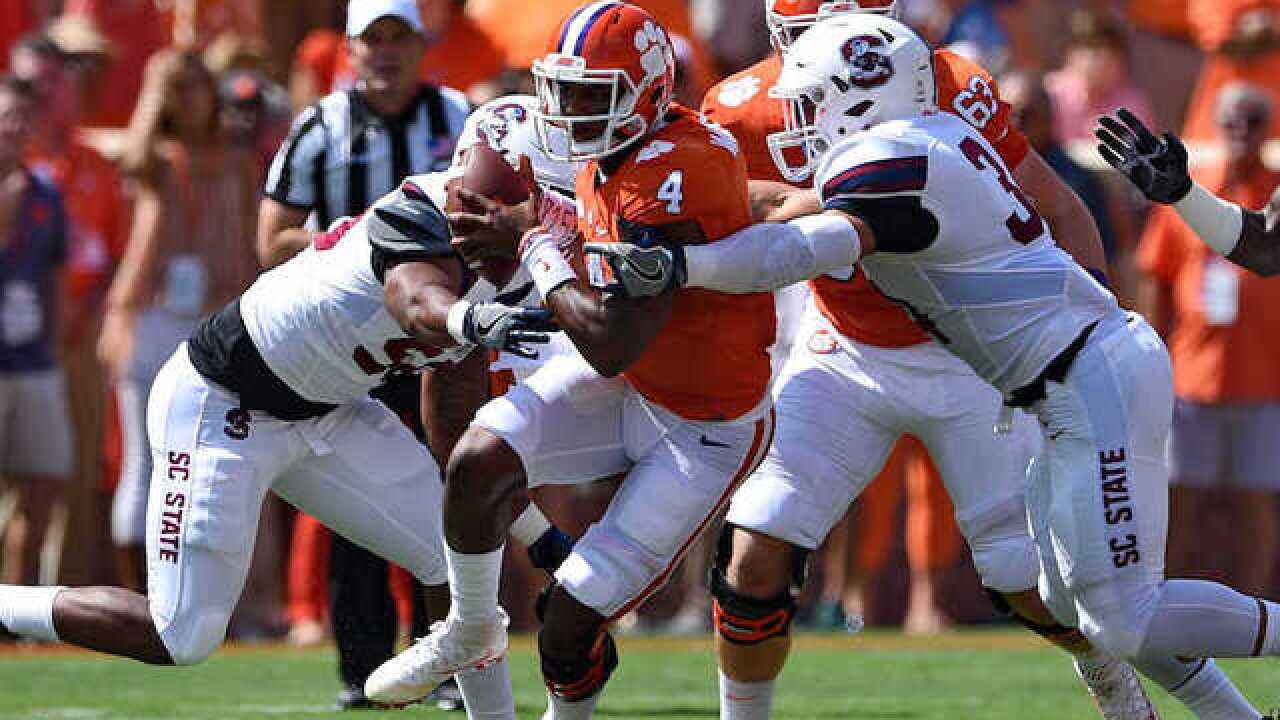 Richard Shiro
<p>Clemson quarterback Deshaun Watson, center, scrambles out of the pocket while pressured by South Carolina State's Dayshawn Taylor, right, and Gregtavious Newell during the first half of an NCAA college football game Saturday, Sept. 17, 2016, in Clemson, S.C.</p>

CLEMSON, S.C. (AP) — Clemson scored early and often in the first half against South Carolina State, and both coaches decided to shorten Saturday's game in what turned into a 59-0 rout.

The game was such a mismatch that the fifth-ranked Tigers (3-0) scored two touchdowns in the first quarter with no time running off the clock. An NCAA rule allows for games to be shortened by time if the coaches agree.

Clemson led 45-0 at the half against the FCS Bulldogs (0-3), and the third- and fourth quarters were 12 minutes each instead of the usual 15 minutes.

Clemson, with three wins to open the season for the fifth time in the last six years — is 31-0 against FCS teams.

The lopsided score comes after Watson told fans he was sorry for the 30-24 win over Troy for any "negative energy" he brought to that game. This time, he was the 4-of-4 on the opening drive that ended with a 7-yard TD pass to Ray-Ray McCloud.

Watson and McCloud also connected on a 36-yard scoring pass. Watson threw a 17-yard TD to Deon Cain in the second quarter before heading to the sideline.

The strangest sequence of the game involved a first-quarter gaffe by South Carolina State's Ahmaad Harris on a kickoff return after a Clemson TD. He flipped the ball to the official in the end zone before taking a knee to stop the action. Clemson's Denzel Johnson recovered the fumble — 14 points, no time off the clock.