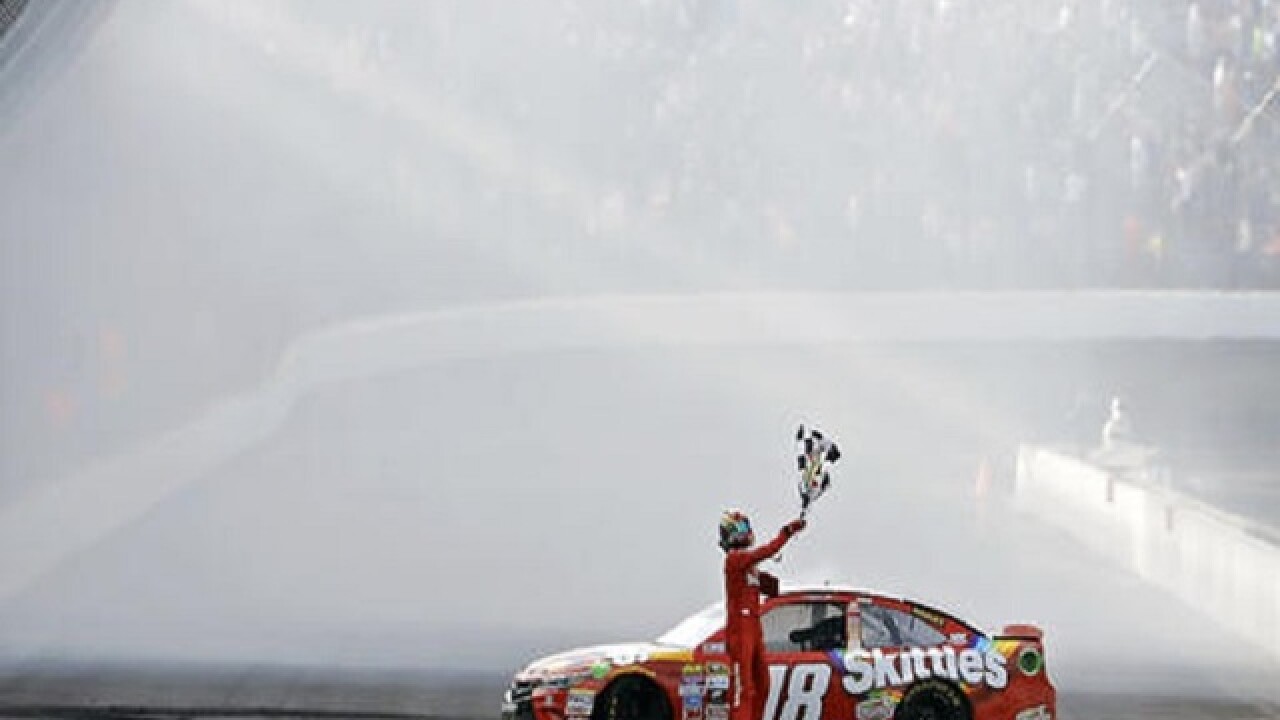 By: Associated Press
Posted at 9:08 PM, Jul 24, 2016
INDIANAPOLIS (AP) — Kyle Busch spent most of this weekend hearing about a historic sweep.
On Sunday, he finally got to dust off the answers.
Busch led a record 149 of 170 laps and beat teammate Matt Kenseth to the finish line in the second overtime by 2.126 seconds to win his second straight Brickyard 400. Coupled with his Xfinity Series success Saturday, Busch became the first NASCAR driver to win both poles and both races on the same weekend.
"I've never had a dominant car like this," Busch said after winning for the fourth time this season and sharing it with his wife and children. "This is obviously a special day and a special car."
The impressive feat even overshadowed two other major story lines — Jeff Gordon's comeback and Tony Stewart's farewell.
Stewart finished 11th in his final race at Indianapolis, while Gordon was 13th. Gordon came out of retirement to replace Earnhardt, who has battled concussion-like symptoms and has not yet been cleared by doctors to drive.
Afterward the two drivers who grew up in Indiana drove side-by-side around the 2.5-mile oval one last time.
"I have gained so much respect and admiration for Tony," Gordon said. "I love this guy. I have always respected his talent."
But nobody was better than Busch this weekend.
One year after winning both Indy races, he joined third-place finisher Jimmie Johnson as the only back-to-back winners of the Brickyard. Johnson won in 2008 and 2009.
Busch surrendered the lead for 14 laps after his first pit stop, regained it when race leader Brad Keselowski pitted then gave it up again for only five laps when he made his second pit stop.
Everyone else spent their day chasing Busch.
The No. 18 car was so strong that Roger Penske's drivers started with a strategy of trying stretch their runs long enough to make one fewer pit stop. It didn't work. Logano finished seventh and Keselowski wound up 17th.
The only real challenge for Busch came with a series of late crashes that delayed his fourth trip to victory lane this season.
The crashes began when Carl Edwards' car wiggled in the first turn on a restart with seven laps to go. His car slid up the track, hitting Keselowski and wound up involving Ryan Blaney, Ryan Newman and Danica Patrick, too. Though nobody was seriously hurt, the wreck brought out a red flag for almost eight minutes.
On the ensuing restart, with three to go, Busch again pulled away only to have a collision between Trevor Bayne and Clint Bowyer behind him to send the race into first overtime.
It happened again when Jamie McMurray slid through the first turn and into the wall on the next restart, but Busch pulled away one more time for a historic win in a race that actually 425 miles.
"I certainly didn't want one, let alone five of them of however many there were," Busch said. "We just wanted the race to go green till the end. We had a really good long-run car till the end, so I felt like we'd be able to hold off all those guys behind us and then we had all those restarts."
WHO'S HOT: Joe Gibbs Racing and Toyota. The team had three cars finish in the top five and heads to Pocono with back-to-back victories. Toyota, meanwhile, had three of its cars place in the top four.
WHO'S NOT: Hendrick Motorsports. Yes, Johnson ended a four-race streak with no top-threes but nobody else finished in the top 10 and none of the four cars was even in contention for the lead.
TOUGH WEEK: Greg Biffle wanted this weekend to be a tribute for his late father, who died Tuesday. Instead, Biffle's day ended early after he crashed on Lap 52.
EMPTY SEATS: It's tough to fill roughly 250,000 seats. But the estimated crowd of about 50,000 left plenty of seats empty at a race that has seen attendance steadily dwindle over the past eight years. The lone exception came in 2015 — in what was supposed to be Gordon's "final ride."
HE SAID IT: When Busch was asked whether his success over the past two years at Indy would prompt him to follow in the footsteps of his brother, Kurt, and run in the Indianapolis 500, Kyle Busch responded: "Well, I won't be following in his footsteps, I'll be doing my own footsteps. It certainly may open up some avenues, I'm not sure."
UP NEXT: Pocono Raceway, July 31. Kenseth is the defending race winner.
Copyright 2016 The Associated Press. All rights reserved. This material may not be published, broadcast, rewritten or redistributed.