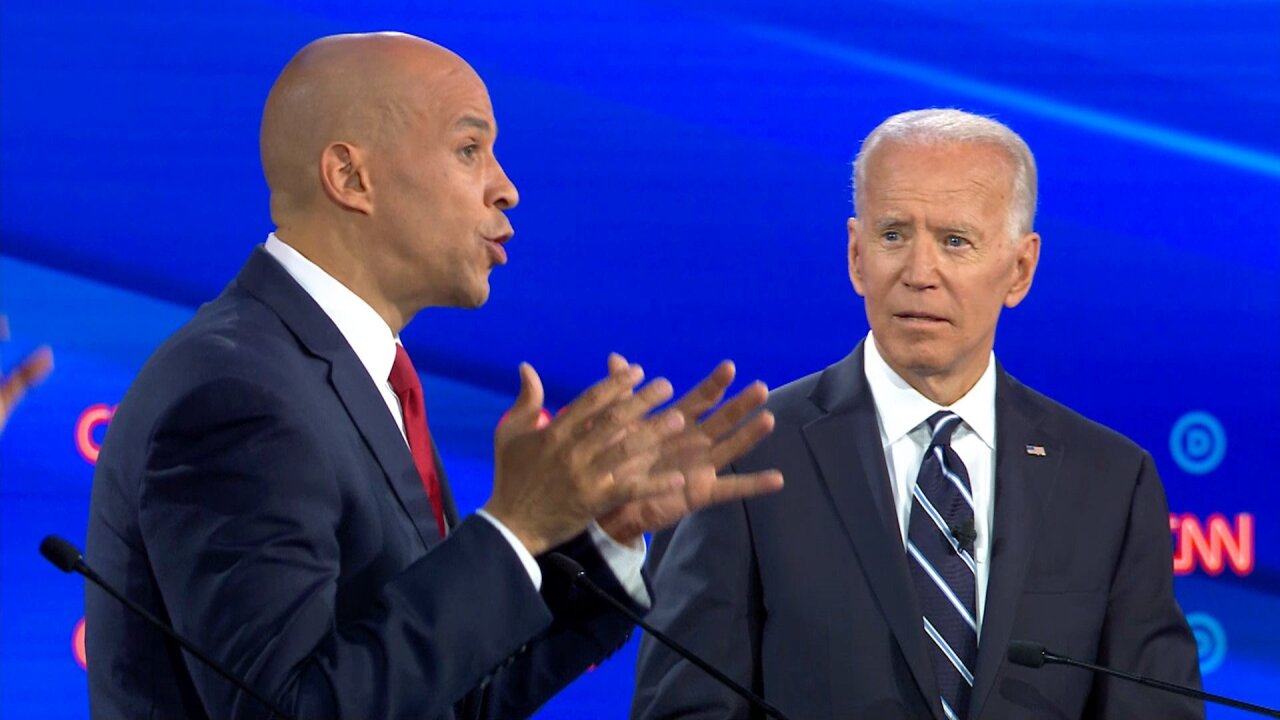 The Democratic candidates ganged up on former Vice President Joe Biden as the second presidential debate turned to immigration on Wednesday night, leaving Biden taking shots from all sides while defending his record.

When the debate shifted to immigration, it was former Housing and Urban Development Secretary Julián Castro who criticized Biden's record during the Obama administration, and sought to turn it into an argument that it is time for new leadership.

Moderators noted that 800,000 immigrants were deported during the first two years of the Obama administration, and asked the former vice president whether those deportations would continue if he was president. Biden said they would not, and went on to note that he and Castro had been in many meetings together when he never raised his current position about opening the borders.

"We sat together in many meetings, I never heard him talk about any of this when he was the secretary," Biden said.

"It looks like one of us has learned from the lessons of the past and one of us hasn't," Castro snapped back.

Castro later said, "There's still going to be consequences if somebody crosses the border. It's a civil action. Also we have 654 miles of fencing. We have thousands of personnel at the border. We have planes, we have boats, helicopters, we have security cameras. ... We need to have some guts on this issue."

Biden under the microscope

Biden knew he would be a target early on in the debate.

"Go easy on me, kid," he said to Harris as they greeted one another at center stage.

Whether it was a warning shot or simply one of those folksy Biden phrases, it was a signal that he would not be blindsided again the way he was in the first debate when Harris dispatched a fierce attack on his record opposing busing to desegregate schools decades ago. In that exchange, he appeared totally unprepared and caught off-guard.

But Wednesday night in Detroit he sought to write a different narrative. In his opening statement, he noted that Democrats were "expecting some engagement here."

Biden defended his record noting that had pushed to send $750 million for Guatemala, El Salvador and Honduras so that people there could "change the circumstance" of "why people fled in the first place."

"We're in a circumstance where if you say you can just cross the border, what do you say to all of those people around the world who want the want the same thing to come to the United States and make the case, that they have to wait in line," Biden said. "The fact of the matter is... if you cross the border illegally, you should be able to be sent back. It's a crime."

Calling for unity, New Jersey Sen. Cory Booker made a forceful argument for immigration offenses to be civil penalties instead of criminal penalties.

"We are playing into Republican hands who have a very different view and are trying to divide us against each other. I'm listening to the language of my colleagues," Booker said. "No, Mr. Vice President, we are not going to let people cross the border."

A few moments later, New York Mayor Bill de Blasio used his time to ask the former vice president to explain what he had done to stop the deportations during the time that Biden was Obama's vice president.

"I asked the vice president if he used his power to stop those deportations," de Blasio asked. "If you want to be president of the United States, you need to be able to answer the tough questions. I guarantee you, if you're debating Donald Trump, he's not going to let you off the hook. Did you say those deportations were a good idea or did you go to the President and say, 'This is a mistake, we shouldn't do it.' Which one?"

It was a question Biden wouldn't answer, citing his private conversations with Obama.

As expected, Booker denounced Biden's record on criminal justice, noting that the former vice president bragged until recently about his work on 1994 crime bill. He also charged that Biden had been on the wrong side of many issues, including tougher sentencing laws that led to a disproportionate number of black and brown Americans being incarcerated.

"The house was set on fire and you claimed responsibility for that fire," Booker said to Biden about his record criminal justice reform.

In a surprising twist, Biden turned on Booker by challenging his record in Newark.

"There was nothing done to deal with" with a police department "that was corrupt," Biden said of Booker's record as mayor of Newark.

Booker appeared to relish the exchange, saying, "If you want to compare records, and I'm shocked that you do, I am happy to do that." He added that Biden didn't know what he was talking about when the former vice president went after Booker's history as mayor.

"There's a saying in my community that you're dipping into the Kool-Aid and you don't even know the flavor. You need to come to the city and see the reforms we put in place," Booker said.

Biden used the exchange with Booker to remind the audience that Barack Obama picked him as his vice president.

"I find it fascinating, everybody is talking about how terrible I am on these issues," Biden said. "Barack Obama knew exactly who I was. He had 10 lawyers do a background check and everything about me on civil rights and he chose me and said it was the best decision he ever made."

Booker had an answer for that too.

"You invoke President Obama more than anybody in this campaign. You can't do it when it's convenient and dodge it when it's not," he said.

After another contentious exchange it was Yang who sought to remind his rivals of their real opponent.

"I speak for just about anyone watching that I would trust anyone on this stage more than I trust our President. We have to focus on beating Donald Trump in 2020," he said.

As the discussion went on, both Biden and Gabbard turned to Harris' record as district attorney and as California's attorney general.

Biden faulted Harris for defending cases that were found to have involved prosecutorial misconduct, and for not disclosing more quickly to defense attorneys that evidence in the San Francisco crime lab had been tampered with.

"She had a police department when she was there that in fact was abusing people's rights and the fact was that she, in fact, was told by her own people -- by her own staff -- that she should do something about and disclose to defense attorneys like me," Biden said, "that you in fact have been -- the police officer did something that did not give you information that would help your client. She didn't do that."

Gabbard delved further into the more controversial aspects of Harris' record as a prosecutor, attacking her over positions she took as California attorney general.

"She blocked evidence that would have freed an innocent man from death row," Gabbard said. "She kept people in prison beyond their sentences to use them as cheap labor for the state of California, and she fought to keep cash bail system in place that impacts poor people in the worst kind of way."

Fiery debate over the future of health insurance

Immediately, Harris and Biden began to spar over the differences in their health care plans. While Biden would expand Obamacare with the goal of universal coverage but not force Americans to give up their private health insurance, Harris' plan would phase in "Medicare for All" and phase out private insurance over 10 years.

"The senator has had several plans so far, and anytime someone tells you you're going to get something good in 10 years, you should wonder why it takes 10 years," Biden said, alluding to Harris' plan. "If you notice, there is no talk that the plan in 10 years will cost $3 trillion."

Harris replied that Biden's description of her plan was "simply inaccurate."

"The reality is our plan will bring health care to all Americans under a Medicare for All system," the California senator said. "Our plan will allow people to start signing up on the first day, babies will be born into our plan and right now 4 million babies, almost, are born every day -- or every year in America. Under our plan we will ensure everyone has access to health care. Your plan, by contrast, leaves out almost 10 million Americans."

Over and over again -- even when responding to criticism from Gabbard -- Harris returned to criticize Biden's plan.

"I'm going to go back to Vice President Biden," she said when given the opportunity to respond to Gabbard, "because your plan does not cover everyone in America by your staff's and your own definition ... as many as 10 million people will not have access to health care, and in 2019 in America."