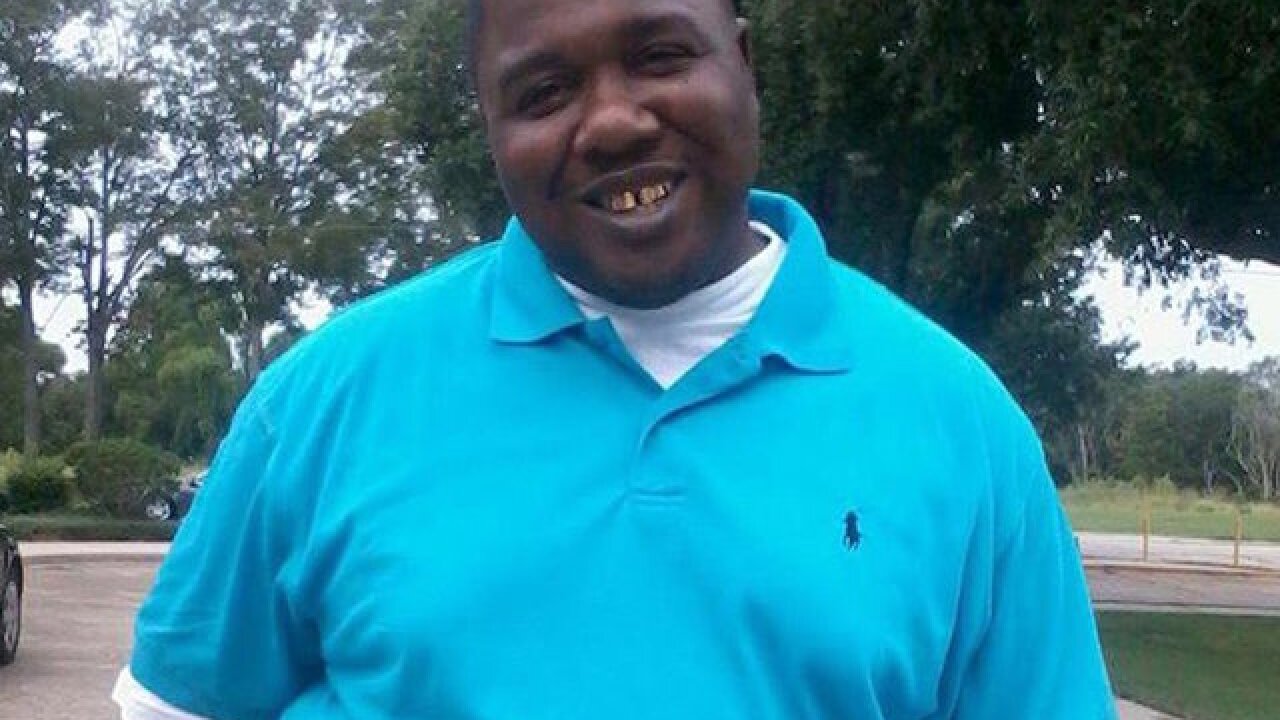 Paul said Howie Lake II, the other officer involved in the July 2016 incident, will be suspended for three days without pay for losing his temper during the incident.

The four videos that were released include a convenience store surveillance video, two police-worn body camera videos and a video recorded by the dashboard camera in one of the police cars.

Video from Lake's body camera shows the officer approaching Sterling, trying to get him to put his hands on the hood of a car, and eventually struggling with him on the ground. During the altercation, another person, presumably Officer Blane Salamoni, screams, "He's got a gun!" and soon thereafter gunshots are heard.

When the officers get up, Sterling is lying on the ground outside the front door of the convenience store with a blood-soaked red shirt.

The gun is not visible in the video but Lake tells another officer he put it in his car. The officers had been responding to a call about a man with a gun. The call was from a homeless man who said that after he approached Sterling for money, Sterling showed him the weapon.

CNN is reviewing the other videos.

When asked what he would say to the Sterling family, the police chief said: "They are in our prayers. .... I hope this brings some closure to them."

The woman who raised Sterling, Sandra Sterling, told reporters earlier in the week she had seen the videos and that they would spark more public outrage.

"When you see those other ... videos of Blane Salamoni killing Alton Sterling, you'll cry again," Sandra Sterling said. "And when you cry again, you'll be telling the Sterling family, 'I'm sorry.'"

No state or federal charges

State authorities announced this week that Salamoni was justified in shooting Sterling outside the Baton Rouge convenience store, and that no charges would be brought against him or Lake.

Previously released cell phone video showed Sterling, 37, pinned to the ground by the officers before he was shot.

As the officers awaited word on their future, Salamoni's attorney said he thought department leaders decided to fire his client months ago.

"No matter what evidence we give them (at the hearing), they're not going to listen. It doesn't matter what we present to them -- they're going to fire him," attorney John McLindon said.

That comment came against a backdrop in which Paul's boss -- Mayor Sharon Weston Broome -- is on record as saying she believes Salamoni's firing is warranted . She told reporters Tuesday she hadn't wavered "on what I have said in the past."

"I will stand by what I have said," she said.

Paul said Tuesday he and three deputy chiefs would preside over the hearings for Salamoni and Lake.

The panel would decide whether "their behavior was consistent with the policy and procedures of the police department," the chief said.

But the disciplinary hearings could focus on factors besides justification, such as authorities' determination that Salamoni pointed a gun at Sterling's head early in the encounter, and while swearing, threatened to shoot him in the head if he moved.

That, for example, is a police policy issue, rather than a question of constitutional violations, the state report cites a use-of-force expert as saying.

If the officers disagree with whatever decisions the panel makes, they can file an appeal with a municipal fire and civil service board.

The killing gripped the nation in part because two videos taken by bystanders, each less than a minute long, were released publicly shortly after the shooting and captured the final part of Sterling's struggle with the two white officers.

In a roughly 30-minute surveillance video from the Triple S Convenience store, Sterling is seen at the front of the store before the shooting, sitting at a table selling CDs, smoking cigarettes and listening to rap music, sources with direct knowledge of the investigation told CNN earlier this week.

Authorities have said Salamoni and Lake went there after police received a 911 call from a man who said someone had pulled a gun on him.

According to the state report released this week, Sterling refused to heed the officers' commands to put his hands on the hood of a car, and each officer reached for and tried to control Sterling's arms.

When Sterling spun around and pulled his right arm away from Salamoni, Salamoni drew his gun, the state report says. The footage from Salamoni's body camera shows Salamoni at this point training his gun at Sterling's head, yelling orders and profanities and threatening to shoot.

A struggle, followed by the shooting

Sterling then complied but eventually resisted Lake's attempts to gain control of his hands, the state report says.

At one point, the already-released cell phone videos show, someone -- Salamoni, according to the state report -- shouting, "He's got a gun!" In one video, an officer draws something from his waistband and points it at Sterling.

"If you move, I swear to God," Salamoni tells Sterling.

At this moment, the state report says, Sterling was positioned in a way that concealed his right front pocket. The officers continue to try to control his hands.

"He's going for the gun," Salamoni yells, according to the state report.

The report says Salamoni first shot Sterling three times in the chest and then rolled off him.

Sterling sat up. As Lake yelled at Sterling to get on the ground, Sterling rolled away from Salamoni, who fired three more shots, this time into Sterling's back. Sterling's hands and right side were concealed from Salamoni's view, the Louisiana attorney general said.

Attorney general: Drugs may have been a factor

In May, federal prosecutors found there wasn't enough evidence to warrant civil rights charges against Salamoni and Lake.

The federal prosecutors cited use-of-force experts who determined the officers' actions were reasonable under the circumstances -- including that the two employed several less-than-lethal techniques before using force, and that Sterling struggled with the officers and failed to follow orders.

The Justice Department also said evidence couldn't prove or disprove Salamoni's assertion that Sterling was reaching for a gun.

Landry, the state attorney general, said Tuesday that Sterling had illicit drugs in his system.

"Considering this, it is reasonable that Mr. Sterling was under the influence, and that contributed to his noncompliance," Landry said.

An autopsy indicated Sterling had cocaine, methamphetamine, hydrocodone, a marijuana ingredient, caffeine, nicotine and alcohol in his blood.

Sterling family attorney Chris Stewart said this week that every action was "initiated by the officers."

He also said Salamoni's threat to shoot Sterling in the head was illegal.

"That is not the behavior that any officer should have," Stewart said. "In our opinion, that is criminal."

Sterling's five children filed a wrongful death lawsuit in June against the city of Baton Rouge, police department and others.