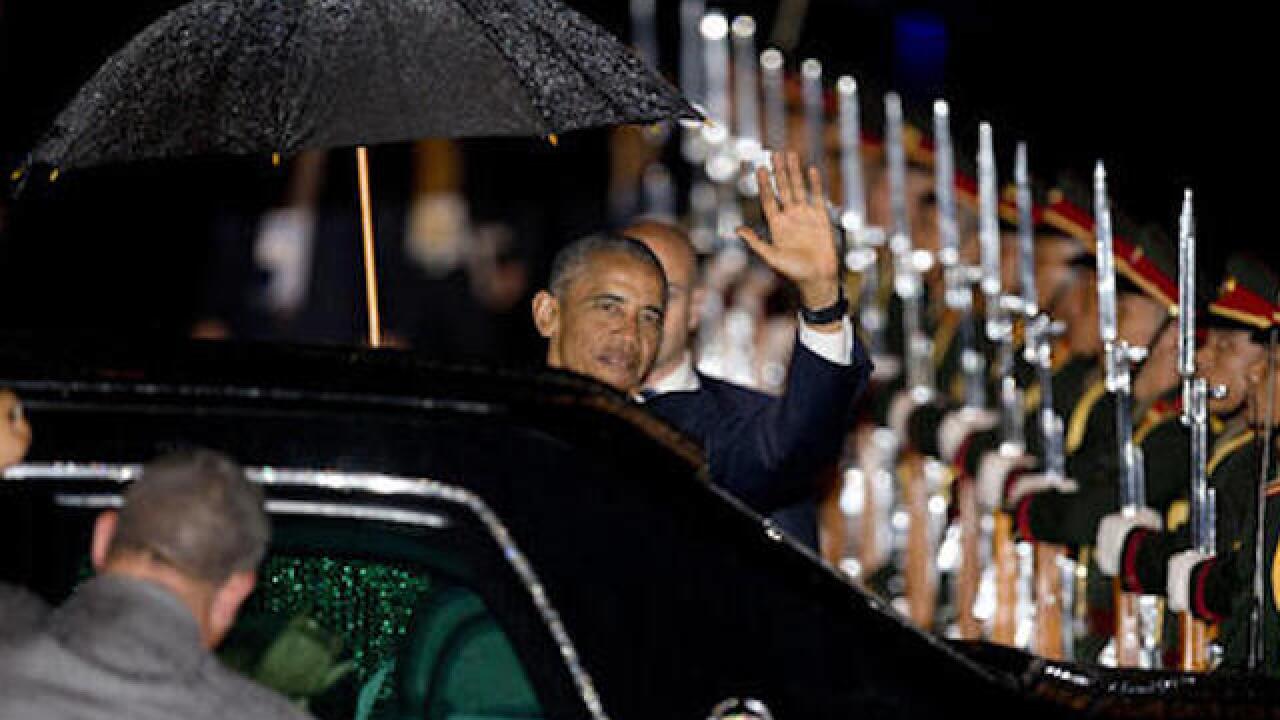 Gemunu Amarasinghe
<p>U.S.President Barack Obama waves upon his arrival at Wattay International Airport in Vientiane, Laos, Monday, Sep 5, 2016. Obama will be meeting the leaders of the Association of Southern Asian Nations (ASEAN) at a summit aimed at strengthening the U.S.- ASEAN strategic partnership.(AP Photo/ Gemunu Amarasinghe)</p>

VIENTIANE, Laos (AP) — President Barack Obama on Monday became the first sitting U.S. president to step foot in the isolated Southeast Asian nation of Laos, opening a three-day visit meant to rebuild trust and close a dark chapter in the shared history between the two countries.

Obama exited the main door of Air Force One, clutching a black umbrella in the evening rain in Vientiane, the capital, before the motorcade whisked him away.

Obama is one of several world leaders coming to the country of nearly 7 million people, where the one-party communist state tightly controls public expression but is using its moment in the spotlight as host of the annual meeting of the Association of Southeast Asian Nations to open up to outsiders.

The visit comes during what is probably Obama's final trip as president to Southeast Asia, a region that has enjoyed intense attention from the U.S. during his tenure. Obama's frequent visits to oft-ignored corners of the Asia Pacific have been central to his strategy for countering China's growing dominance in the region. By bolstering diplomatic ties in Vietnam, Cambodia and Myanmar, the Obama administration has declared it wants to compete for influence and market access in China's backyard.

In Laos, Obama will wrestle with the ghosts of past U.S. policies.

In the 1960s and 1970s, the U.S. rained bombs on Laotian villages and the countryside as America's war with Vietnam spilled across the border. The Laotian government estimates that more than 2 million tons of ordnance were released during more than 500,000 missions — one bomb every eight minutes for nine years.

Obama planned to acknowledge this history and its damaging effect on Laos' development, tourism and agriculture. He is expected to announce additional aid to clean up unexploded ordnance, while the Laotian government is expected to offer help in accounting for missing and dead U.S. service members.

Obama said Monday in China, before he departed for Laos, that diplomatic work on war legacy issues will be "a show of good faith on the part of the country and a way for us to move into a next phase of a relationship."

He cited Vietnam as the model. Aides said Obama's visit will probably echo a stop in Hanoi, Vietnam, in May, when the president declared he was "mindful of the past, mindful of our difficult history, but focused on the future."

In both countries, Obama benefits from not carrying baggage that might have complicated his message. Too young to have served in the Vietnam war, Obama serves as a generational page turner — eager to speak directly to those too young to remember the troubled past.

In Laos, as he has across Southeast Asia, he'll hold a town-hall-style event for young people. The White House said he'll encourage Laos' slow political opening and budding entrepreneurial culture.

Obama will be speaking to people like 33-year-old Anysay Keola, who remembers his mother's stories of running and hiding from the bombs and of memorizing a phrase roughly translating to: "The U.S. dropped the bomb on us."

But Keola, an entrepreneur and filmmaker and part of Vientiane's growing creative class, also grew up on American music and fashion. The war's ill will faded long ago, and his friends are excited about Obama's arrival but not necessarily for political reasons.

"He is perceived as like a celebrity," Keola said. "It's just on the surface: 'Ooh, Obama's coming. Ooh, big plane.' Or things like that. Or his Cadillac car is here. Those are the things that people share and talk about."

While the U.S. is known as a rich country with an outsized cultural influence, China, by contrast, is seen as the huge neighbor helping to spur this small nation's robust growth. Massive Vientiane construction sites come adorned with Mandarin script. China has committed to financing a $7 billion high-speed railroad to bisect the country.

Though Laos' new president, Bounnhang Vorachit, is seen as edging closer to Vietnam than to China, the country has managed a diplomatic two-step this year. As chair of the Southeast Asian nations' group, it has projected neutrality in other countries' disputes with China over the South China Sea.

Obama is due to meet Vorachit on Tuesday.