51 killed in bombing at a wedding in Turkey 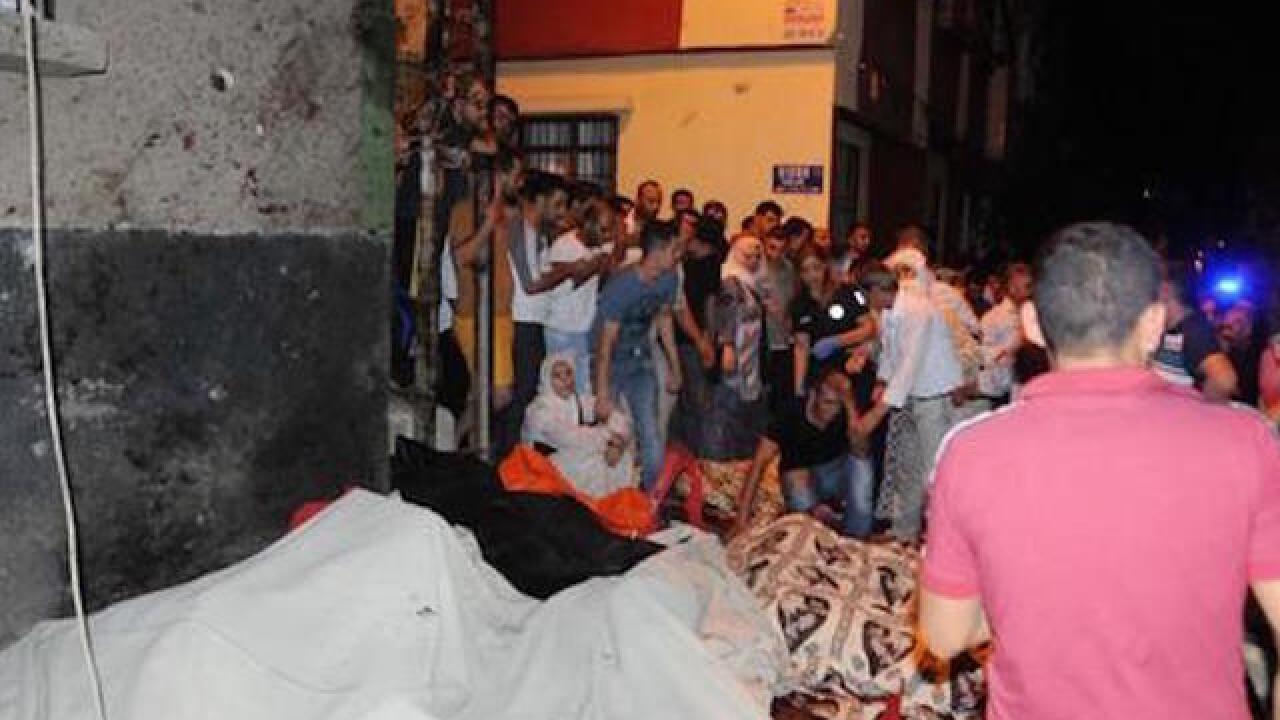 Eyyup Burun
<p>People react after an explosion in Gaziantep, southeastern Turkey, early Sunday, Aug. 21, 2016. Gaziantep Province Gov. Ali Yerlikaya said the deadly blast, during a wedding near the border with Syria, was a terror attack. (Eyyup Burun/DHA via AP)</p>

ISTANBUL (AP) — A child suicide bomber killed at least 51 people and wounded nearly 70 others at a Kurdish wedding party near Turkey's border with Syria, President Recep Tayyip Erdogan said Sunday, decrying the attack as an attempt by Islamic State extremists to destabilize the nation by exploiting ethnic and religious tensions.

The bombing late Saturday in Gaziantep was the deadliest attack in Turkey this year.

It comes amid ongoing struggles between the government and Kurdish militants linked to the outlawed Kurdistan Workers' Party, known as the PKK, and as the country is still reeling from the aftermath of last month's failed coup attempt, which the government has blamed on U.S.-based Muslim cleric Fethullah Gulen and his followers.

Erdogan said immediately after the Gaziantep attack, which he blamed on IS, that any strategy "meant to incite the citizens against each other along ethnic and religious lines will not work."

Later, addressing the nation before Istanbul's city hall, Erdogan said the attacker in Gaziantep was aged between 12 and 14. He said 69 people were wounded, with 17 of them in critical condition.

He again blamed the attack on the Islamic State, but there was no immediate claim of responsibility.

The pro-Kurdish political party HDP condemned the attack on the wedding, which it said was attended by many of its party members.

It said in a statement that it was "quite significant" that the attack, which it also blamed on IS, came only hours after the Kurdistan Communities Union, a militant liberation organization that includes the PKK, announced plans to try to negotiate to end a three-decade conflict between Kurdish militants and the Turkish government.

"This attack targets those determined and persistent in peace, resolution, and those struggling for democracy, equality, freedom and justice," the HDP said. "The attack was planned to disable the spread of peace and success of possible negotiations."

A bus driver who shuttled some of the guests from Siirt to Gaziantep said that he couldn't believe the party was targeted.

"This was a wedding party. Just a regular wedding party," Hamdullah Ceyhan told the state-run Anadolu Agency. "This attack was deplorable. How did they do such a thing?"

The bride and groom weren't in life-threatening condition and were undergoing treatment, but the groom's sister and uncle were among the dead, Anadolu reported.

"We stand by our ally Turkey and pledge to continue to work closely together to defeat the common threat of terrorism," said U.S. Ambassador to Turkey John Bass.

In the Vatican, Pope Francis led hundreds of people in silent prayer for the victims of the attack, concluding by asking "for the gift of peace for everyone."

Security expert Metin Gurcan, a former Turkish military officer and columnist for the online newspaper Al-Monitor, said that IS who view the attack as "hitting two birds with one stone" — as retaliation for Syrian Kurdish advances on their forces in Syria, and for Turkey's attacks on IS targets.

Gurcan said in an email to The Associated Press that IS has been trying to agitate or exploit ethnic and religious tensions in Turkey, and "we know very well to what extent wedding attacks can sow disorder in nation's social fabric from the Afghanistan experience."

The suicide bombing follows a June attack on Istanbul's main airport where IS suspects killed 44 people. A dual suicide bombing blamed on IS at a peace rally in Turkey's capital, Ankara, in October killed 103 people.

Meantime, there have also been ongoing attacks claimed by the PKK or linked to the militant group, as well as the coup attempt blamed on Gulen's movement. Gulen has denied any involvement.

Earlier this week, a string of bombings blamed on the PKK that targeted police and soldiers killed at least a dozen people. A fragile, 2½ year peace process between the PKK and the government collapsed last year, leading to a resumption of the three-decade-long conflict.

In the immediate aftermath of the Gaziantep bombing, Erdogan said there was "absolutely no difference" between IS, Kurdish rebels and Gulen's movement, calling them terrorist groups.

Gurcan said, however, that it was a "grave mistake" to lump the three together.

"Putting these three organizations with different political objectives, tactics and techniques into the same basket ... causes the failure of tailoring specific counter strategies," he said.

Following the attack, police sealed off the site of the explosion and forensic teams moved in. Outside the perimeter, hundreds of residents gathered chanting "Allah is great" as well as slogans denouncing attacks.

Deputy Prime Minister Mehmet Simsek and the country's health minister traveled to the scene, visiting the wounded and inspecting the site.

"This is a massacre of unprecedented cruelty and barbarism," Simsek told reporters. "We ... are united against all terror organizations. They will not yield."