Republican-nominated justices now hold a 6-3 advantage on the Supreme Court, three of whom are appointees of President Donald Trump. 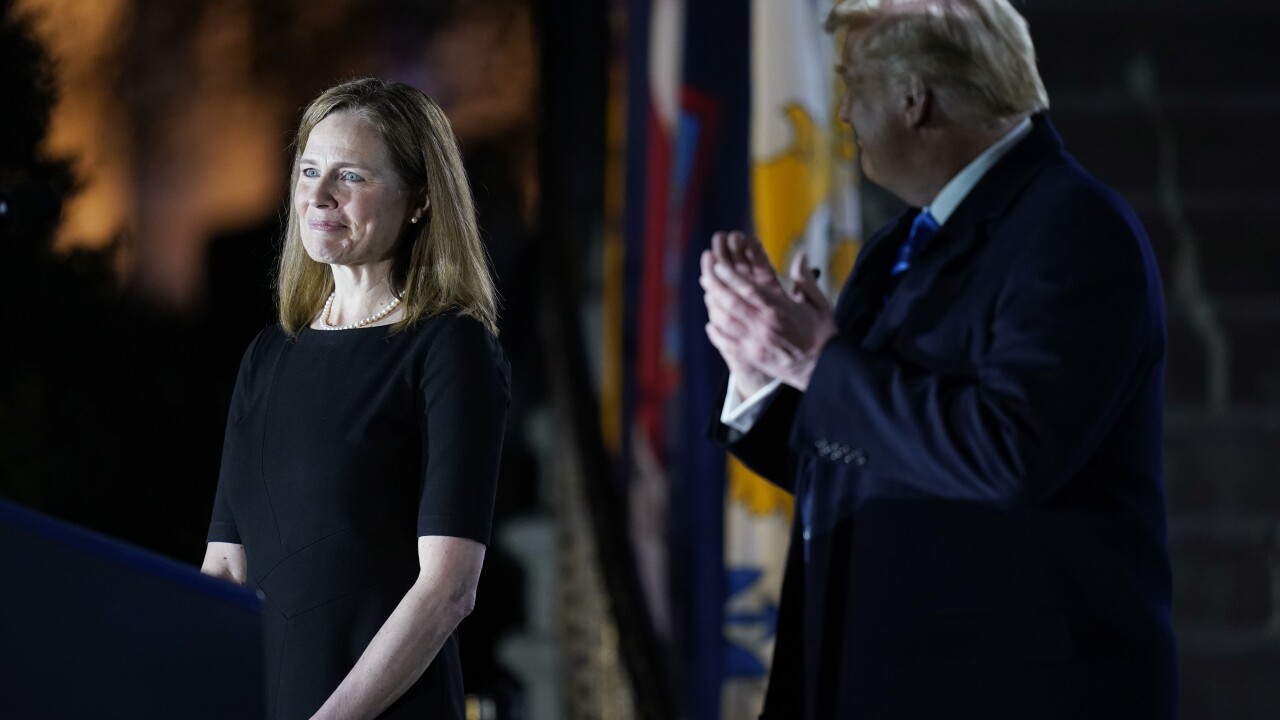 Conservatives now hold a decisive edge on the Supreme Court after the Senate voted in a near party-line vote on Monday to confirm Amy Coney Barrett to the highest court in the US.

Republican-nominated justices hold a 6-3 advantage on the Supreme Court, three of whom are appointees of President Donald Trump.

The lone dissenting vote came from Republican Susan Collins of Maine, who is facing a tough re-election bid for her seat. Collins expressed concern of holding a confirmation vote just eight days before the US presidential election. Also, one-third of all US Senate seats are up in next week’s election.

"Today, Monday, October 26, 2020, will go down as one of the darkest days in the 231-year history of the United States Senate," Senate Minority Leader Chuck Schumer said. "Let the record show that tonight the Republican Senate majority decided to thwart the will of the people and confirm a lifetime appointment to the supreme court in the middle of a presidential election after more than 60 million Americans have voted."

In 2016, Republican senators opted not to consider President Barack Obama’s nomination of Merrick Garland to the court after the death of Antonin Scalia in February of that year.

"In another political age, Judge Amy Coney Barrett would be getting 70 votes or more in the US Senate because of her qualifications," McConnell said. "In a different era. Now, we know that's not going to happen. These are not the days when Justice Scalia was confirmed 98-0 and Justice Ginsburg was confirmed 96-3. And by the way, I voted for both Ginsburg and Breyer. Seems like a long time ago now."

In her swearing-in ceremony, Barrett described the political battle during her confirmation.

"I have spent a good amount of time over the last month at the Senate, both in meetings with individual senators and in days of hearings before the Senate Judiciary Committee," Barrett said. "The confirmation process has made ever clearer to me one of the fundamental differences between the federal judiciary and the United States Senate, and perhaps the most acute is the role of policy preferences."

Legal experts noted the impact the confirmation may have.

"It’s not unusual for justices to take the bench and have important cases put before them. There’s several religious liberty cases coming up after the Affordable Care Act. There’s several cases involving the Trump administration the census and immigration policy that are all going to be before her," said Louis Virelli, a professor of law at Stetson University College of Law. "So it’s not unusual for new justices to have the opportunity to make a big impact. What’s unusual about this is how starkly it shifts the balance of the court."

Some noted the legacy justices can leave.

"Amy Coney Barrett who is 48 I think will be around long after our kids don’t know who Donald Trump or who Joe Biden are when they are long gone, when they have exited the scene Amy Coney Barrett will be there," said Charlton Copeland, a professor of law and dean's distinguished scholar at the University of Miami School of Law.

It comes just days before the election, as voters are already heading to the polls.

"The courts changing and they have to pay attention and they will have to judge how they vote based upon how they feel about those kinds of decisions coming down," said ABC Action News legal analyst Jeffrey Swartz.

A recent statewide survey from the University of South Florida asked respondents about the most important factor in their choice when voting for the president. Three percent said the Supreme Court.

"Women voters on both sides particularly have been watching this very closely and it is clearly going to be part of their calculation in who to vote for," said ABC Action News political analyst Susan MacManus.

She said both campaigns may see this as a way to turn out their own voters.

"It is already a part of a lot of congressional races, the campaign literature, it’s certainly been a big part of fundraising for the two parties and obviously both of those are very important in politics," MacManus said.

“Justice Amy Coney Barrett is a reminder to millions of Americans why they voted for President Trump in the first place. She is now the third solid, conservative Justice appointed to the Supreme Court by the President and she will apply the Constitution and not turn the Court into a super legislature. Her nomination and confirmation exposed the radical leftist plan to pack the Court by expanding its size, and also put Joe Biden on the spot. He must now come clean with the American people, reveal his list of prospective Justices, explain his position on court packing, and stop telling voters that they ‘don’t deserve’ to know what he thinks.”

"Instead of working to provide COVID-19 relief to struggling Americans, Mitch McConnell and Republicans chose to jam through a Supreme Court nominee—when more than 62 million people have already voted. It’s despicable and they must be held accountable."

Both Florida Senators Marco Rubio and Rick Scott voted in favor of the confirmation.