Melania Trump speaks out on cyberbullying 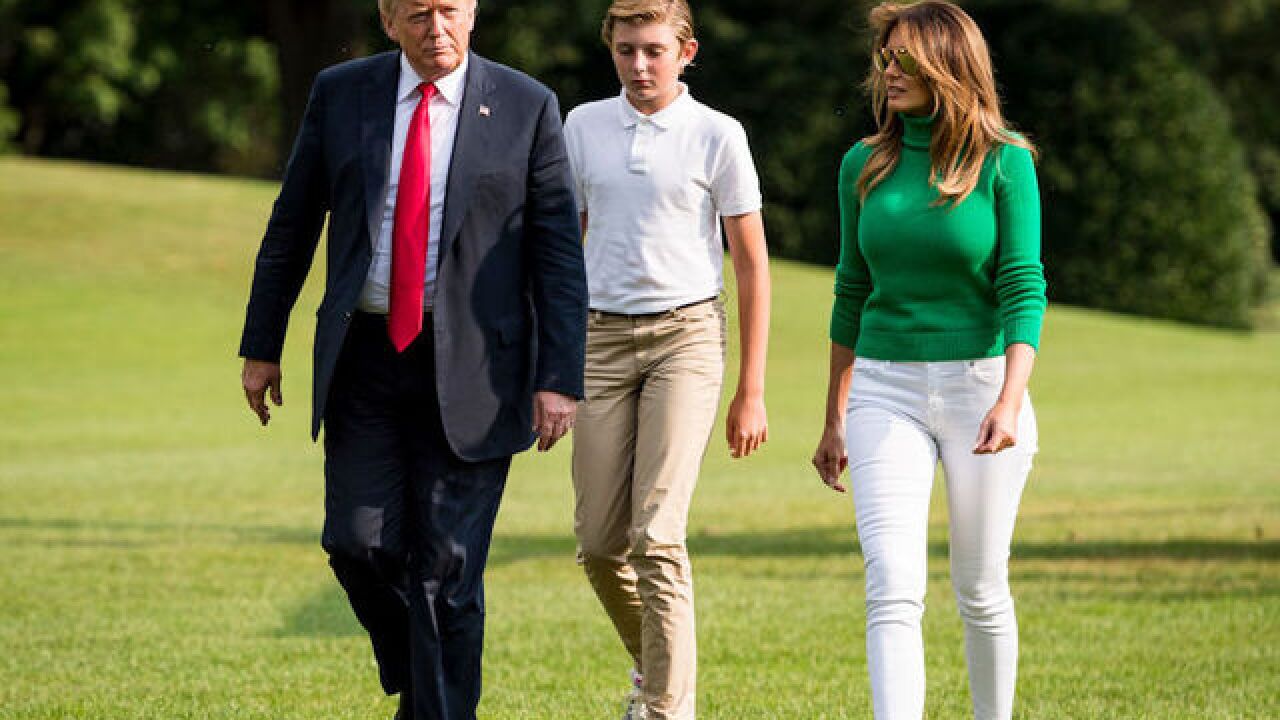 Copyright Getty Images
Pool
<p> President Donald Trump disembarks from Marine One on the South Lawn with First Lady Melania Trump and his son Barron, after returning to the White House on Aug. 19, 2018 in Washington, D.C. President Trump was returning from the weekend at his Bedminster, New Jersey golf resort.</p>

First lady Melania Trump spoke out against cyberbullying Monday as part of her Be Best campaign, warning against "destructive and harmful" uses of social media and once again highlighting a messaging rift between the East Wing and the West Wing.

"In today's global society, social media is an inevitable part of our children's daily lives," Trump said at a cyberbullying summit in Rockville, Maryland. "It can be used in many positive ways, but can also be destructive and harmful when used incorrectly. This is why Be Best chooses to focus on the importance of teaching our next generation how to conduct themselves safely and in a positive manner in an online setting."

At the same time, President Donald Trump was on Twitter, railing against John Brennan, whom he called a "hack" and "the worst CIA Director in our country's history" as summit panelists discussed the need for adults to be "good digital role models" for children. Despite firing off multiple tweets Monday morning, none were about the first lady's Be Best initiatives or her speech.

The President's well-known Twitter habit, exemplified last week by his harsh attack on former White House aide Omarosa Manigault Newman, has drawn criticism and highlights the seeming disconnect between the East Wing and the West Wing.

"When you give a crazed, crying lowlife a break, and give her a job at the White House, I guess it just didn't work out. Good work by General Kelly for quickly firing that dog!" he tweeted.

The first lady's spokeswoman sought to downplay any disconnect between the East Wing and the West Wing, calling the first lady "independent."

"She's addressed this before. She is well aware of the criticism, but that will not deter her from doing what she feels is right. I would hope most people in this country are proud that they have a strong and independent first lady who only has the best interests of children at heart -- I know I am," the first lady's communications director Stephanie Grisham told CNN.

In a White House with a President who makes his own rules -- especially on social media -- his wife has faced criticism for being unable to curb her own husband's behavior. Instead, she's made an independent choice to do what she can.

"She is aware of the criticism but it will not deter her from doing what she feels is right. The President is proud of her commitment to children and encourages her in all that she does," Grisham said in a statement.

Responding to the apparent hypocrisy between the first lady's assertion that social media can be "destructive and harmful when used incorrectly" and the President's own habits, Grisham deflected.

"Rather than dissecting her remarks, let's focus on the countless children who struggle w bullying & online safety each day," she tweeted.

She later described Trump's advocacy against cyberbullying as "a sincere campaign meant to help children."

During her speech, the first lady acknowledged that children can be more aware of the "pitfalls" of social media than adults.

"Let's face it: most children are more aware of the benefits and pitfalls of social media than some adults, but we still need to do all we can to provide them with information and tools for successful and safe online habits," she said.

Trump's Be Best campaign, which she launched in May, centers on three key issues for children: well-being, fighting opioid abuse and positivity on social media.

Speaking about her husband's social media habits in an interview on CBS' "60 Minutes" just after the 2016 election, Melania Trump said that sometimes it got him in trouble, "but it helped a lot, as well."

Asked whether she spoke up if she felt he crossed a line, the first lady said, "Yes, I tell him all the time."

But she conceded that at the end of the day, he does what he wants.

"I think he hears me. But he will do what he wants to do at the end. He's an adult. He knows the consequences. And I give him my opinion. And he could do whatever he likes with it," Trump said.