Neighbors say they're frustrated over damage

WESLEY CHAPEL, Fla.- Neighbors say wild boars have destroyed their lawn and it will cost hundreds to fix the damage.

"Wow. Terrible. I mean it's horrible. The whole yard has to be redone," said Kim Gignac, neighbor.

Neighbors living in Shellwood Place in Wesley Chapel say they're frustrated over the damage.

"It has continued for 3 nights and right now we don't know. It comes at midnight, early morning around 2 a.m.," said Murali Udipi, neighbor.

Murali Udipi says his HOA already told him they won't pay to trap the pigs or fix his lawn.

Chris Wirt, a local wildlife trapper and owner of "A All Animal Control of Tampa, Florida," says he's caught 65 pigs in the past month in several communities including Seven Oaks and Tampa Palms. He says that is more than triple his monthly average of 20 pigs.

"It looks so nice and the next day, you come out and it's all dug up. Just terrible. Just dug up like a rototillers gone through," said Darren Cockeram, neighbor.

Another community, Estancia at Wiregrass, sent out a memo to its neighbors. It stated the management team has set up traps throughout the Estancia property and to please not touch them. The hogs will be humanely caught, removed from property and then the meat is often donated to families who are in need.

Neighbors are hesitant to fix their yards because they fear the pigs will return.

"Oh, they're going to come back. They'll be back, every night," added Gignac.

Florida Fish and Wildlife officials say the wild boar or feral pig is not native to Florida. They eat all kinds of foods including plants and animals. They disturb the soil as they look for food and leave properties looking like a plowed field. 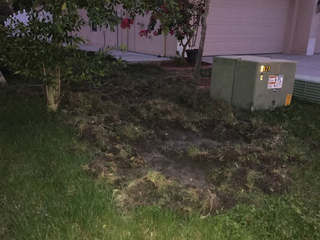 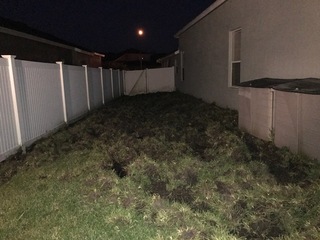