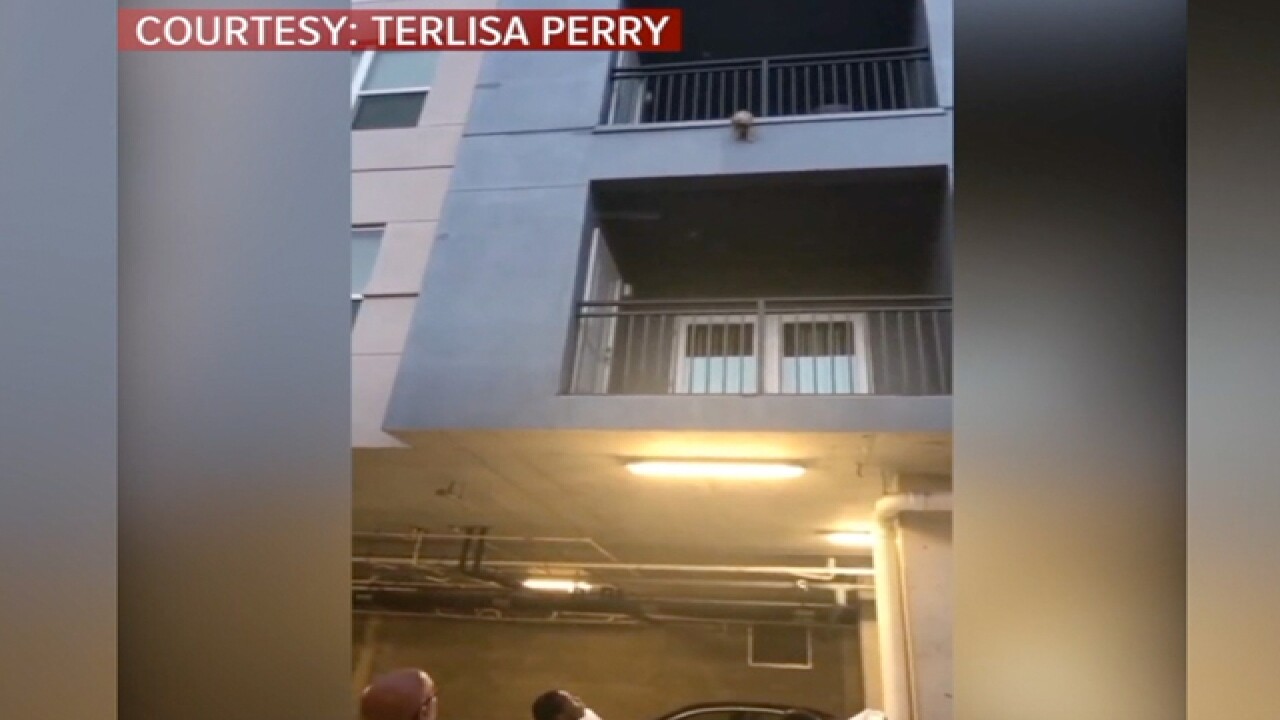 The video of a little dog hanging from an apartment balcony face down is heartstopping. Fank Elision had just pulled into the Trio Encore Apartments in Tampa Sunday and couldn't believe his eyes.

"It was like something out of a movie or something. I didn't think it would happen to me in a hundred years. I didn't expect for this to happen!" he said.

He immediately called his grandmother, Terlisa Perry, while others called police.

"I mean by the time I got here, they had a sheet. One of the other neighbors in this building had thrown the sheet and they had spread the sheet out," said Perry.

Two Tampa officers joined Ellison and several others. The group then waited and waited holding up that sheet.

"I don't know what was going through the dog's mind, at some point, that dog felt safe enough, OK they are going to get me and let go," Officer Todd Magyarosi said. "It really lifts your spirits. So, I am hoping to do something like that tonight. I just love to help people and animals it doesn't matter this is what I do."

Magyarosi's partner said when they pulled up to the call he couldn't believe what he was seeing.

"To see that little dog up there broke my heart," Officer Jay Hollman said. "Looked like he was contemplating, then his legs gave out."

The officers and a handful of Good Samaritans were in the perfect spot to catch the dog in the dead center of the sheet.

"It was the best feeling I ever felt," Hollman said. "He didn't hit the ground. He wasn't dead. The citizens were cheering like it's the Super Bowl. For everyone to come together for a small little dog shows the community has love for each other and they still care."

"The dog was extremely scared. It was hanging from its hind legs actually so its whole body was out, it actually took about 35 to 40 minutes for the dog to actually take that leap of faith and fall right into the sheets," said Ellison.

They took video capturing the rescue because who would believe a little dog was hanging on a balcony from three stories up.

"I mean it was just everybody's hearts was just racing and beating and pounding. We were just terrified that this dog is going to fall to its death," said Perry.

Once they knew the dog was okay, someone knocked on the owners door. No one answered. So they took the dog to a vet.

ABC Action News tried talking to the neighbors too. But no one was home. Police said they planned on going back Monday night to try and figure out how the dog got out onto the balcony in the first place.

"I'm just thankful that God placed them in the right place at the right time," said Perry.