CRYSTAL RIVER, Fla. — A commercial fisherman isn't sure how his latest catch ended up in his trap. The crab he caught had a tag on it that read "Smithsonian Environmental Research Center."

"I didn't know what to expect. I ran up to a bunch of colleagues in Kings Bay. They hadn't seen anything like that either," said Tom Cochran.

The Smithsonian Environmental Research Center in Edgewater, Maryland tagged nearly 50,000 crabs in the Chesapeake Bay between 2003 and 2016.

Robert Aguilar, a biologist with Smithsonian, said recreational and commercial crabbers who reported catching a tagged crab received a reward. Some crabs worth $5, but others worth more.

Aguilar said they believe they tagged the crab Cochran caught on July 17, 2015. This would be the furthest south any of their tagged crabs have traveled. 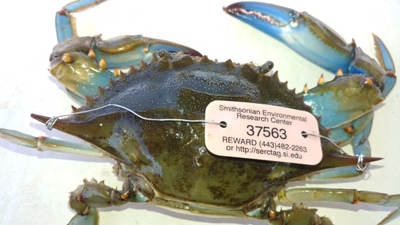 Aguilar said before Cochran's catch, researchers did have one crab that was reported off Flagler Beach.

Researchers tagged the crabs because they are interested in studying the blue crap population.

"We want to look at their migration movement and behavior and examine who is catching them, when and where," said Aguilar.

Biologists have asked Cochran to hold onto the crab.

"I got it secluded away in its own little trap with bait to keep him fed," said Cochran.

Biologists will pick up the crab in early January. They want to study it.

"We will look at parasite loads and look at the growth of the crab, we'll take some samples of the shell," said Aguilar.

Aguilar says it's possible someone re-tagged a crab with this tag, but he thinks that is unlikely.