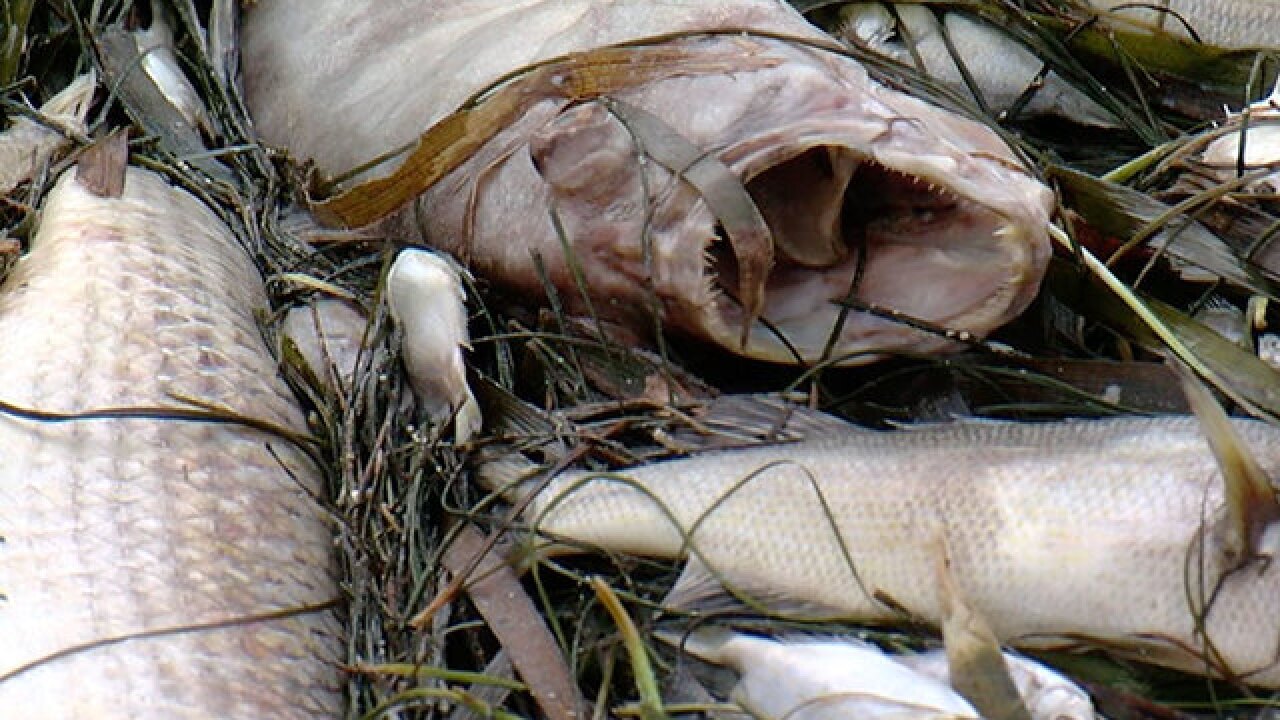 ANNA MARIA ISLAND, Fla.-The toxic red tide that has plagued Southwest Florida for the past several weeks has now made its way to the northern tip of Anna Maria Island near Passage Key.

The only thing separating the toxic red tide organism, Karenia brevis, from Ft. DeSoto Park and Egmont Key are the open waters of Tampa Bay.

On Sarasota Bay ABC Action News reporter Michael Paluska saw thousands of dead fish stretching as far as the eye can see.  From a distance, the bellies of the upside down fished look liked waves white capping.  But, the closer you got and the more clearly you could see the dead fish in clusters glistening in the hot Florida sun.

“It is horrible, and it has killed all the bait fish, and that is what my livelihood depends on to take people fishing, that’s gone,” Captain Pappy Pedigo said.  “There’s nothing you can do; this is it.  No one is going to do much of nothing while this is here.”

Pappy is a commercial fisherman.  He wants to know what the state plans to do with the thousands of dead fish now rotting on some of Florida’s most beautiful beaches.

“Clean up the dead fish some way,” Pedigo said.  “Take boats and scour the top of the water and remove them before they start stinking and causing the problem.  At least so we don’t scare the tourists away.”

We saw fishes of all sizes dead in the water from tiny bait fish to massive grouper.

“You could see just drawn clearly from the sky and all the fish floating and the smell that comes up,” Katrina Arrondo said.  Arrondo toured Sarasota Bay in a seaplane.  She said the line of death was unmistakable.

Describing how just a few miles of water separated healthy fish from the dead ones trapped in the toxic plume spreading through the water.

A lot of people we spoke to on Anna Maria Island were complaining of itchy throats, watery eyes, face tingling, and trouble breathing.  The red tide is toxic.  Doctors recommend not swimming in waters tainted by the red tide.

Scientists tell us the red tide is spreading north.   You can track the latest information for red tide by clicking here.