Video of a brain operation could help doctors solve a medical mystery that potentially threatens a young woman's life.

Video of a brain operation could help doctors solve a medical mystery that potentially threatens a young woman's life.

For almost two years, the patient says the doctor wouldn't give her the video.

The I-Team has learned how this situation could provide a life-saving lesson for all of us.

“I couldn't keep anything down. Not even water,” said Bonnie Lawrence.

For more than 700 days, she has been throwing up between six and 20 times a day.

“I lost about 80 pounds,” Bonnie said. “It's just terrible. I have a four-year-old daughter who takes care of me. It's just not how it's supposed to be.”

Her husband has also been impacted.

“It's caused me to have to file bankruptcy. Lost hours at work, because I have to come home and take her to the hospital or just sit with her for the day and try to comfort her,” said Michael Lawrence.

He is currently facing two medical malpractice lawsuits in Pinellas County, including one filed by Bonnie.

The Lawrences say Shorter couldn't figure out what caused the vomiting, but they believe he possessed a possible clue.

“Dr. Shorter had told us in the beginning that he films all his surgeries,” said Michael Lawrence.

“I believe the answers are in that video,” said Bonnie.

After Bonnie's condition worsened, Shorter released her as a patient, but didn't give the video to her or her new surgeon, which surprised the Lawrences.

“We asked him up front if we could have one, a copy of it. He didn't seem to think that that was a problem,” said Michael Lawrence.

Bonnie's new surgeon told them he needed to look at the video before he would attempt to operate to fix her problem.

“They don't want to do experimental surgery to go in and just look for something, when they can look at this and see exactly what he did and how he did it,” Michael said.

“It's legally part of the record and it must be provided,” said U.S.F. Healthcare Vice President Jay Wolfson.

He says Florida law says doctors have to turn over all parts of medical records, including videos

“The Florida Board of Medicine will take emergency action to act on a physician who is not only non-compliant, but who is endangering the health and welfare of a patient. Which this could be,” Wolfson said.

“It's my life. I don't want to live like this anymore,” said Bonnie.

ABC Action News helped the Lawrences contact the Florida Board of Medicine.

Within days, Shorter sent the video. 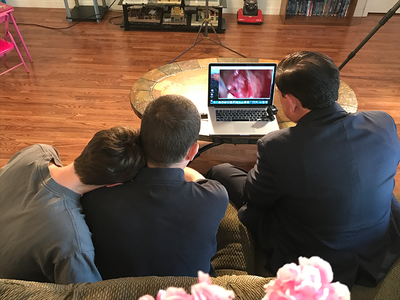 We contacted Dr. Shorter, but he says he can't talk about the case due to HIPPA and privacy concerns. He says the Lawrences only recently requested the videotape, but they remember it entirely differently.

“I've been waiting for this video for almost two years now,” Bonnie said.

“In one week, you've done what has taken us two years,” said Michael.

Dr. Shorter's attorney later clarified what happened, saying there was an apparent mix-up involving Bonnie being given her complete medical record.

He sent the following statement:

“Dr. Shorter’s office timely responded to each of Ms. Coyne’s requests for her patient records by providing a full and complete copy of her medical chart.  The individual assigned to respond to patient records requests was not aware of the existence of a video and did not consult Dr. Shorter before responding.  Dr. Shorter first became aware of Ms. Coyne’s attempt to acquire her video on April 19th, 2018.  A complete copy of the video was promptly provided to her and her treating neurosurgeon by overnight deliver.  Dr. Shorter remains available to assist Ms. Coyne and her surgeons to ensure continuity of care and continues to wish Ms. Coyne a successful recovery.”

The Lawrences don't want the same thing to happen to you.

If your doctor won't give you any part of your medical record, they say you should contact the board of medicine without delay.

“Two years ago, this could have been fixed,” said Bonnie.

She says she’s hopeful it still can.