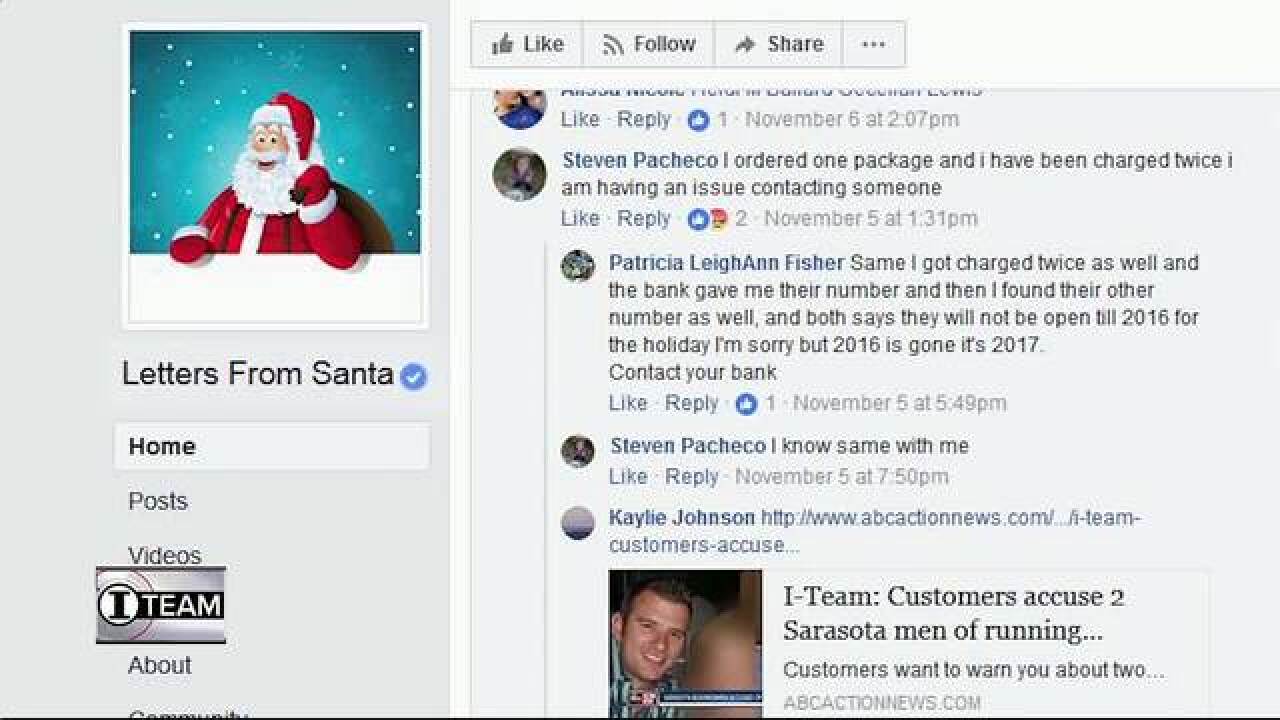 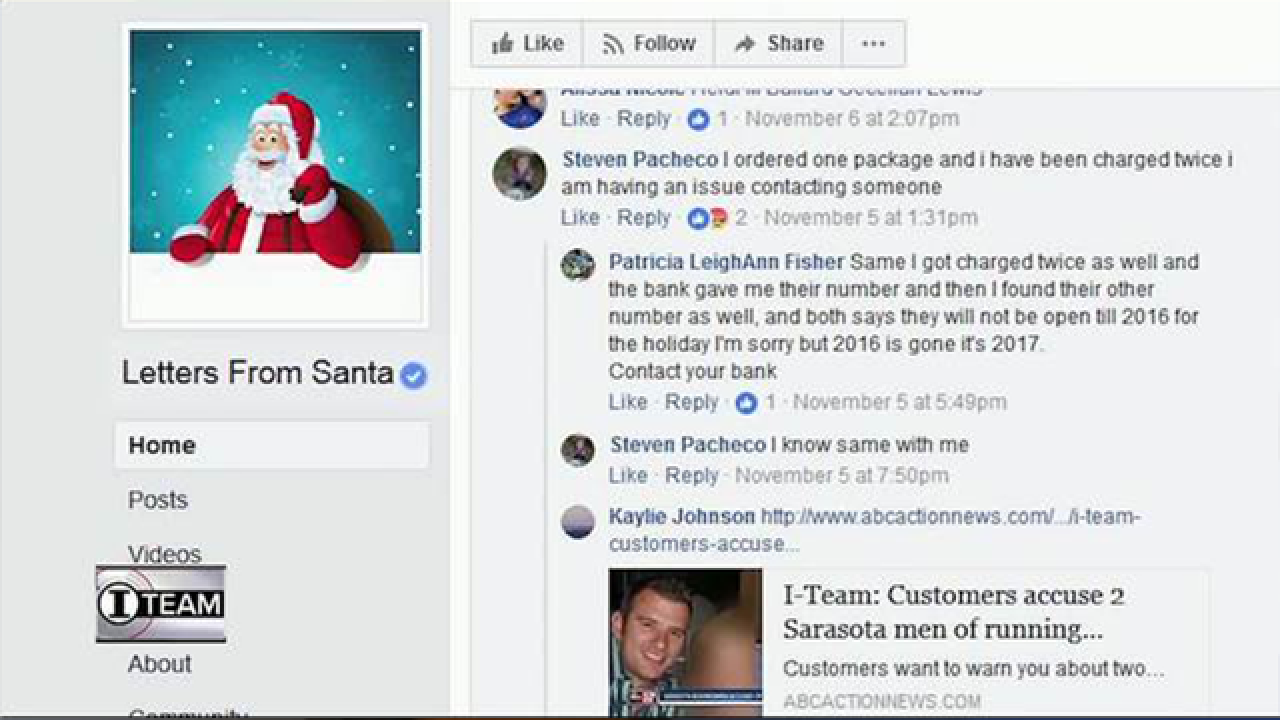 The I-Team first exposed the issue in March and has learned they're back business this holiday season.

We tried talking to Bill Michelon, owner of Holiday Printables, a Sarasota based company.

But Michelon snubbed the handshake and walked away.

While his house is decorated for the holidays and exemplifies the Christmas spirit, his customers say he's certainly not delivering it...literally!

"I would say they're horrible," one customer tells us.

"I don't want people to be a victim like we were," says another.

They're all waiting on Santa products they ordered, including a letter from Santa, reindeer food, and fake snow from the North Pole.

Angela Bloom is still waiting. She ordered 2 Christmases ago. She spent $150 and got nothing.

"Nothing at all. I feel totally duped," she says.

Stacey is one of many who filed a complaint with the Better Business Bureau. Complaints range from failing to deliver goods to over billing.

"They do not deliver on what they promise people," she says.

Back in March, the I-Team revealed Bill Michelon and Patrick Ferlazzo run several companies together. Holiday Printables and three others all have an F rating with the Better Business Bureau.

BBB employees still can't get Michelon or Ferlazzo to respond.

We caught up with Michelon at his newly purchased Sarasota home he bought for 750-thousand dollars. He just started the Mercedes Benz in the driveway.

Reporter: "We just wanna get a few words with you sir."
Michelon: "Can you leave the property please?"
Reporter: (While walking away) Ok we will. Just wanna give you the opportunity to talk, can we talk to you on the street? (Door closes)

On Facebook they go by Letters From Santa. We found several complaints in the comments.

One person even posted our first story. Someone later deleted our story and the complaints.

We reached out to Facebook officials and their verified check mark next to their name was later removed.

Here's where things get really interesting...Dale and Carie Gruber own Packagefromsanta.com, a company delivering Santa letters and products based outside of Detroit. It's their eleventh season. They have an A+ rating and accreditation from the BBB. Dale tells us the two Sarasota businessmen have been stealing their videos and pictures they produced and are passing it off as their own.

"What they're doing is wrong and it needs to stop. I say stop...in fact we told them to stop from a legal standpoint," says Dale.

The Grubers provided the I-Team screen grabs and examples of pictures on the Sarasota company's sites that match the video the Grubers say they originally produced. You can see the examples in the video above. They say it's been confusing customers.

"We've had our own customers who have called and said you know I really thought I was ordering from you guys," Carie says.

Dale and Carie tell us their company has been negatively impacted by Holiday Printables.

"It's the frustration of the customer that's really the most disheartening part," Dale says.

Michelon labels himself a "marketing mastermind and a professional media buyer" on his YouTube channel, but customers have a different label.

Stacey: "You are Grinches and hopefully karma ends up getting you in the end."

Dale closes by saying, "be nice because Christmas is coming up. You don't want to be on the wrong side of Santa Claus like these guys." (rolls eyes)

Some people on their Facebook page claim they did receive their products.

Dale and Carie with Package From Santa are planning on suing the Sarasota company. Their lawyer confirms they plan on filing soon.

Jarrod Holbrook is an Emmy and AP Award-winning Investigative Reporter for the ABC Action News I-Team. Do you have a story idea? Contact Jarrod on Facebook, Twitter, or via email at jarrod.holbrook@wfts.com.