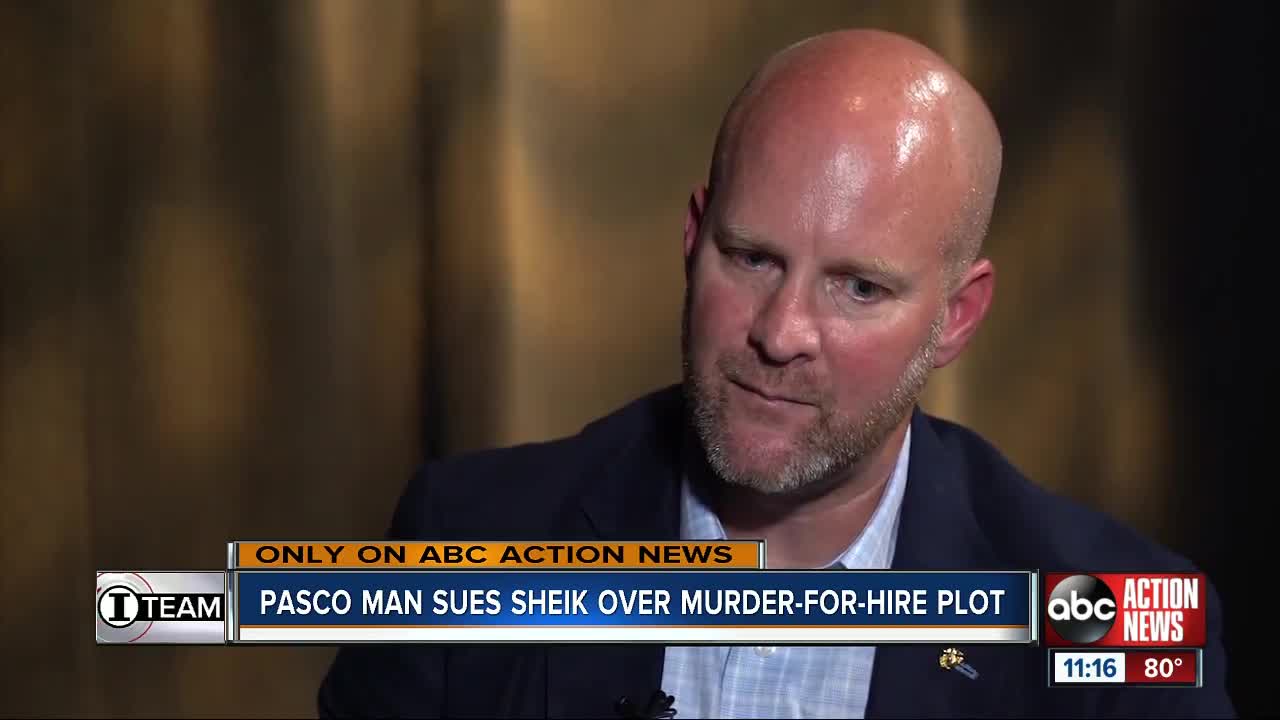 The lawsuit reads like the plot of an action-adventure movie, but retired U.S. Marine Matthew Pittard told I-Team Investigator Adam Walser the events were terrifying and all too real. 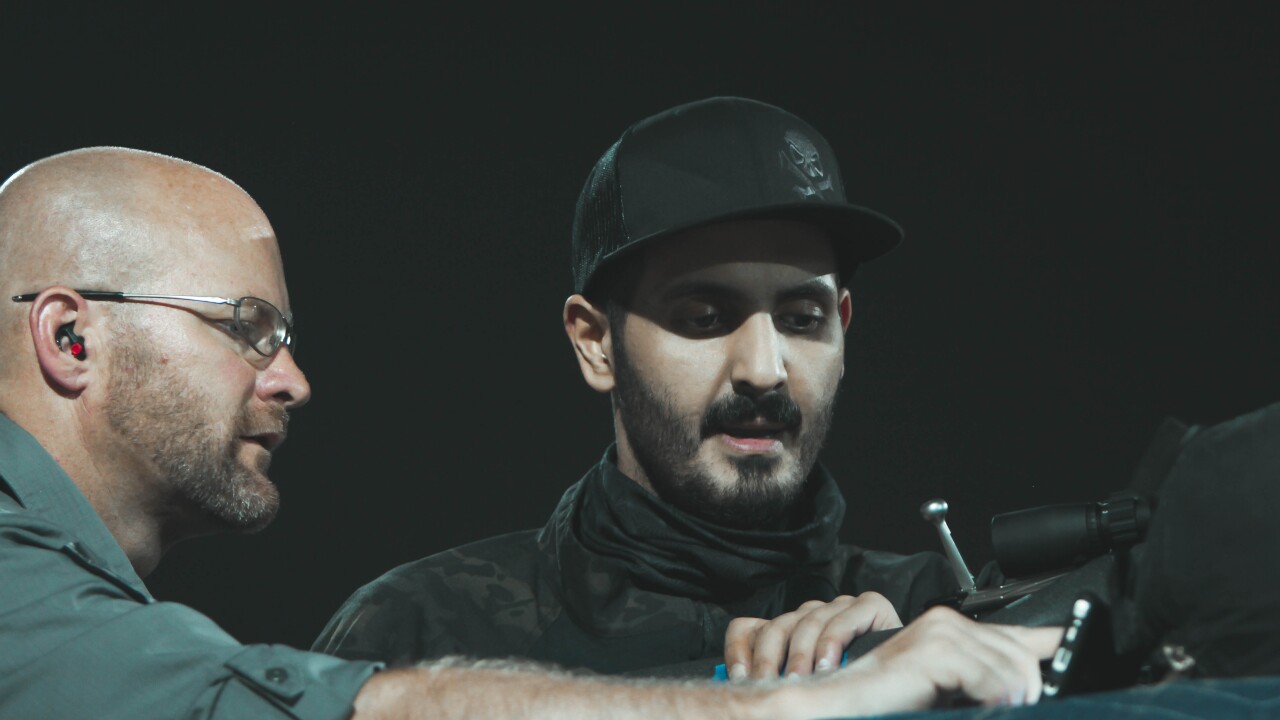 TAMPA, Fla. -- A Pasco County military veteran is suing a billionaire Middle Eastern sheik in U.S. federal court in Tampa -– accusing him of trying to enlist him to murder two people in California and holding Americans against their will inside his posh, guarded compound in Qatar.

The lawsuit reads like the plot of an action-adventure movie, but retired U.S. Marine Matthew Pittard told I-Team Investigator Adam Walser the events were terrifying and all too real.

Pittard and another American who worked for the sheik are now suing him for $34 million in a federal employment lawsuit.

Sheik Khalid al Thani is the brother of Qatar’s Emir and the son of the country’s former leader.

Pittard said it all started in 2017 in Los Angeles, when al Thani hired him as his personal security director. Pittard said he previously worked as a defense contractor for one of al Thani’s companies in Qatar – training local soldiers and police officers.

The security job involved protecting al Thani, his family and his entourage of more than two dozen people as they traveled throughout the United States and abroad, according to Pittard, who said there were causes for concern early on.

“I was down the hall when he actually OD’ed and hit the floor,” said Pittard. “We hit him with the Narcan and popped him right back up.”

Shortly after, al Thani hired another American, Matthew Allende, a paramedic based in Los Angeles.

Allende told ABC Action News, “I would basically be watching him and making sure that he doesn’t stop breathing.”

“There were two incidents in Los Angeles where they had asked me to kill a male and a female,” said Pittard.

Pittard said the sheik asked him to murder a man after that man tried to collect on a $6,000 debt. Pittard said he refused and instead paid off the debt.

al Thani wanted the woman dead because he believed she had been texting a man from another Middle Eastern country, according to Pittard.

Pittard said al Thani asked him to shoot the woman and “bury her in the desert.”

“At that point, I got up and said, ‘Don’t ever ask me to do that again,” said Pittard.

But even before the alleged murder plots, al Thani -- who is a race car driver -- already had a reputation.

A Ferrari and Porsche registered to al Thani were caught on video speeding through stop signs in a Beverly Hills neighborhood in 2015.

At the time, police said al Thani tried to falsely claim diplomatic immunity when they confronted him about the drag racing.

“You can’t claim diplomatic immunity if you don’t have it,” said Beverly Hills Police Chief Dominic Rivetti in a press conference in the wake of the incident. “And you can’t use that as an excuse to jeopardize the public or commit crimes.”

Shortly after the second alleged murder solicitation incident, Pittard said he decided to quit the security job but returned to his defense work for al Thani’s company in Qatar.

At the same time, al Thani and his entourage – including Allende – also returned to Qatar and the sheik’s opulent compound, which included three garages filled with luxury sports cars.

“Servants everywhere – very luxurious residence and it was basically the residence of a lot of partying,” said Allende.

But Allende said the sheik’s all-night activities eventually wore him out.

“I was going sometimes 20, 24, 36 hours straight and that was on the regular,” said Allende. “The whole staff knew. It was like, ‘Yeah, we hope he sleeps tonight,’” said Allende.

After working for three straight weeks, Allende said al Thani finally agreed to give him a day off, but things had changed by the time Allende arrived at the palace’s front gate.

Allende said he feared for his life and decided to try to make an escape by scaling 18-foot perimeter wall.

“I jumped the wall and as soon as I landed, I felt my foot – just instant pain,” said Allende, who told ABC Action News he was dragged back inside the compound, where al Thani came to see him.

“He just looked at me and said, ‘Hey Spider Man, you tried to climb the wall,’” said Allende.

Allende underwent surgery for broken bones and said he was held at the palace for two months before he was allowed to fly back to the U.S.

“The amount of fear from that point was just like every day was a stressful day,” said Allende. “You wake up and kind of wondering what exactly is going to happen today.”

Another American Trapped Inside the Compound

But Pittard said the paramedic wasn’t the only American held against his will in Qatar.

While in Qatar, Pittard said he received frantic text messages from another American al Thani had met earlier in Los Angeles. The man told Pittard he was trapped inside the palace.

“‘I can’t get out of here,’” Pittard said the man told him. “‘He’s not letting me leave. There’s dudes walking around with AKs. They’ve pushed me back in the gate.’”

Pittard said he contacted the U.S. Embassy and helped the man escape the country, but al Thani found out.

“That’s when he called me and he threatened to kill me,” said Pittard.

After hiding for several days, Pittard said he arranged a meeting with al Thani.

“He sits back and puts his leg up on the table and he’s got his Glock 26 and he taps it,” said Pittard, who told ABC Action News he was at al Thani’s office for more than 16 hours.

Eventually, al Thani let him go. But only after Pittard said they made him sign a non-disclosure agreement.

That agreement isn’t valid because Pittard signed it out of fear for his life, said Pittard’s Tampa-based attorney, Rebecca Castaneda.

“You’re scared for your life and you’re in a foreign country. Normal, typical employment is not like that,” said Castaneda. “It sounds like a war-time situation minus the war."

Castenada, who also represents Allende, filed a federal employment lawsuit against al Thani and his companies in July – seeking $34 million.

“Both plaintiffs have felt physically harmed, emotionally harmed and I think a big part of it is deterrence for them. Somebody like this can’t harm American citizens in their country or ours,” said Castaneda.

Back on U.S. soil, Pittard and Allende said they hope their lawsuit will send a message.

“You’re holding Americans there against their will. That’s not OK,” said Allende.

Pittard said, “He needs help – a lot of help – and he needs to pay for what he did.”

ABC Action News reached out to the U.S. State Department, which says it is aware of the allegations against al Thani but would not say whether the U.S. government has opened an investigation.

Efforts to reach the Qatari Embassy in the U.S. and al Thani’s companies for comment were unsuccessful.