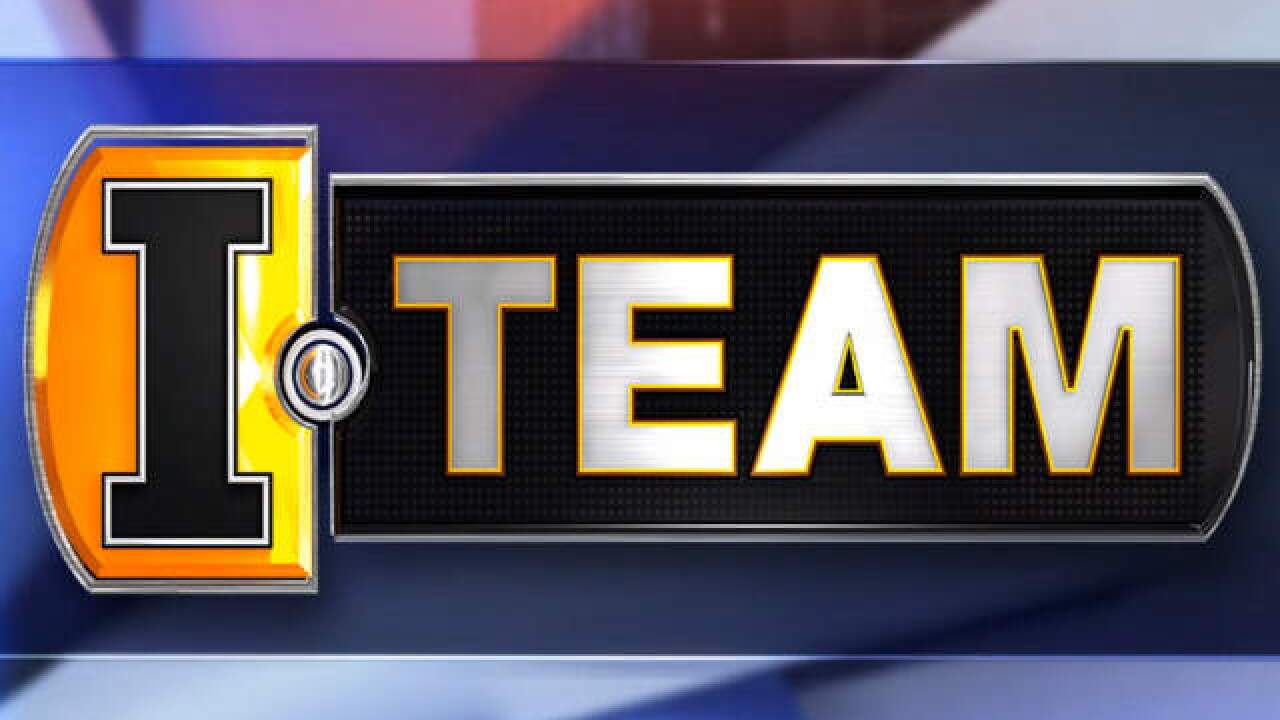 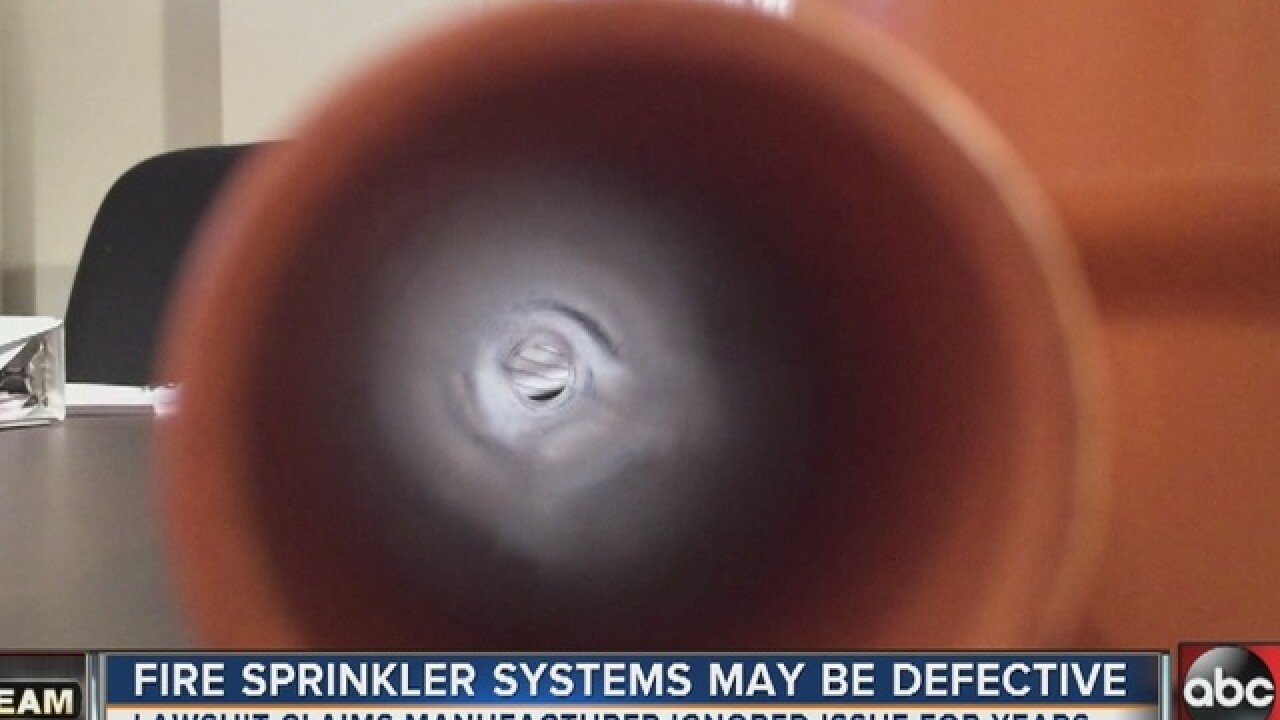 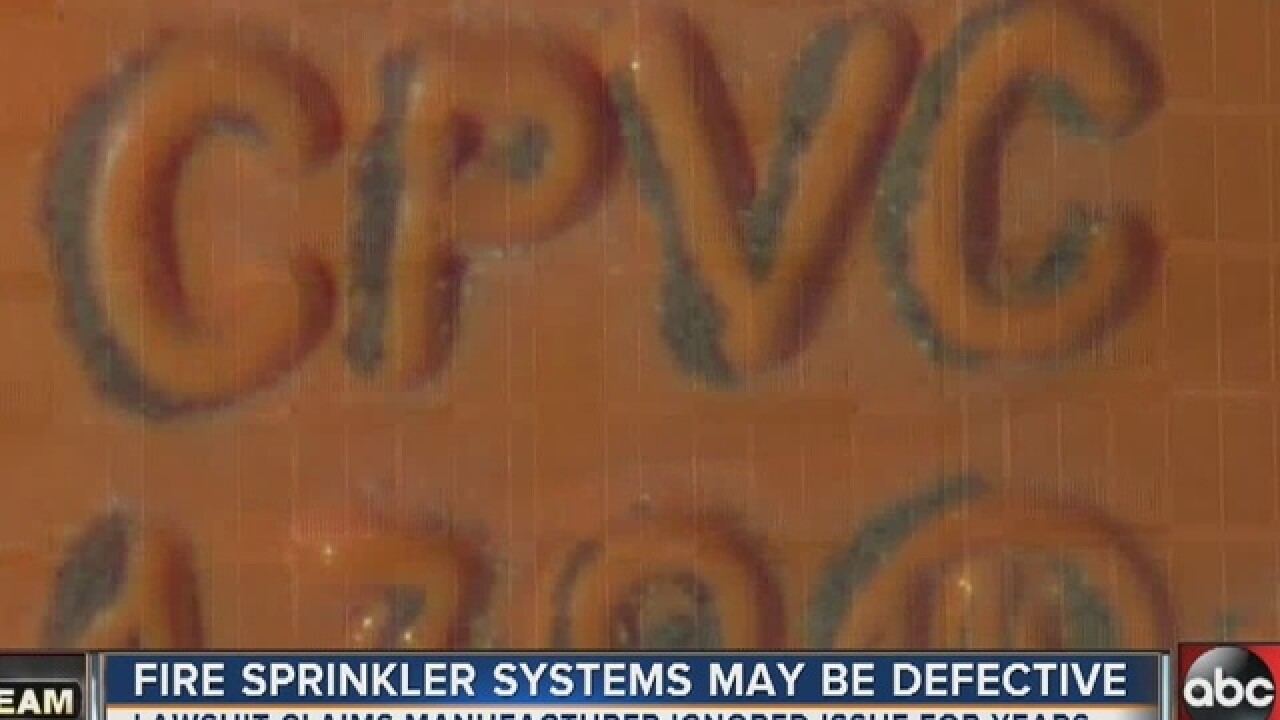 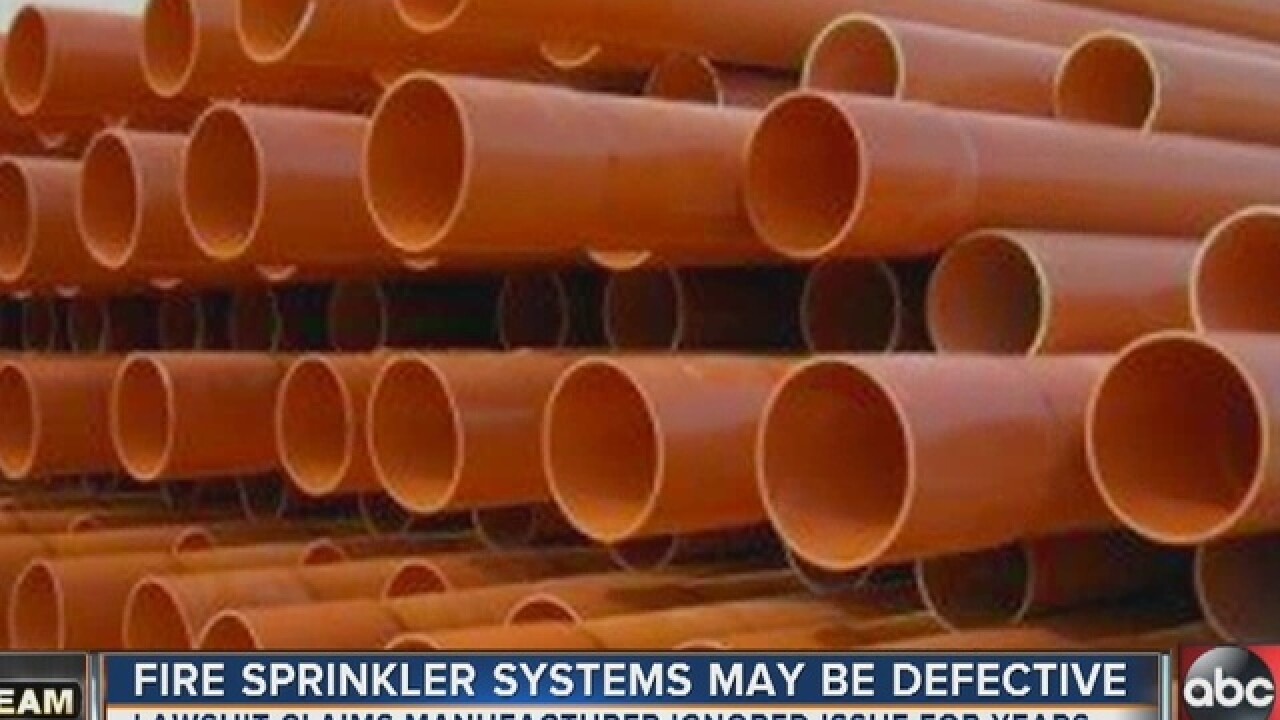 The I-Team is uncovering a safety warning for people living in condos and apartment buildings -- the fire sprinkler system may be defective and you could be in danger.

A $1 billion lawsuit claims that manufacturers knowingly installed defective pipes in buildings across the country and potentially put thousands of lives in danger.

Gonzalez said the problem is the resin in the plastic pipe breaks down and fails when it comes into contact with common building products like bonding agents and anti-corrosive materials in metal pipes that lead into the CPVC system.

"We've hired a number of nationally recognized experts engineers, chemists material experts who have gone to the lab, tested this material and determined it's defective. It's not suitable for what it's being sold.  It will fail," he said.

In his lawsuit, he claims the pipes were "defective" and "endanger the lives of thousands"

So far he has several clients in Florida, Texas, Arizona, Kansas, Mississippi and Alabama.

He said two high rise condos in the Miami area sustained millions of dollars in damages and residents were forced out of their homes when a CPVC pipe broke and sent water gushing through the buildings.

"So how wide spread of a problem do you think this is?" we asked.

"This is a national issue," Gonzalez responded.

Tampa's Fire Marshal Charles Owen says the CPVC pipe in question, is in about 99 percent of the condos and apartments in our area.

"A lot. Where they can use it they always use it."

Marshal Owen said it's been legal to use for years and is a cheaper alternative to steel pipe.

His team of investigators test systems frequently and keep a list of materials that are not compatible with CPVC.

"I've never seen a failure in my 20 year tenure in the fire department. But has it happened? I'm sure it probably has."

According to Gonzalez the companies in question knew the material was defective, but kept selling it anyway.

In the lawsuit he states, emails from Lubrizol, one the largest manufacturers of the CPVC, show they tested the product as early as 2005 and knew it was defective.

He claims their acts "constitute a conspiracy"

"It's a classic case of putting profits over people and sales over safety," he said.

Lubrizol sent us this statement:

Lubrizol is aware of the litigation filed in Florida pertaining to issues at two condominium buildings. Lubrizol is one of many companies from the Fire Sprinkler industry that are named in the suit. It is the company’s policy to not comment on pending litigation.

Lubrizol has not concealed information and denies the allegations in the lawsuit. There is no reason to believe the lawsuit contains any allegations about CPVC that have not been alleged elsewhere, tested and addressed. The industry has always taken proper steps to ensure safe installation and use of fire sprinkler systems around the world.

CPVC has been a reliable, widely used and highly valued product for more than 50 years. Builders and plumbers who value the strength and versatility of CPVC have installed it in buildings and homes across the country. As a market leader, Lubrizol stands behind its products and will continue to do so.

Gonzalez says sprinkler systems installed from 2005-2012 are most at risk.

Experts say if you notice small drops of water beading up on your ceiling, you should have a professional check it out.  Even if they have to cut into the ceiling to see, it  could save you more money and headache in the long run.