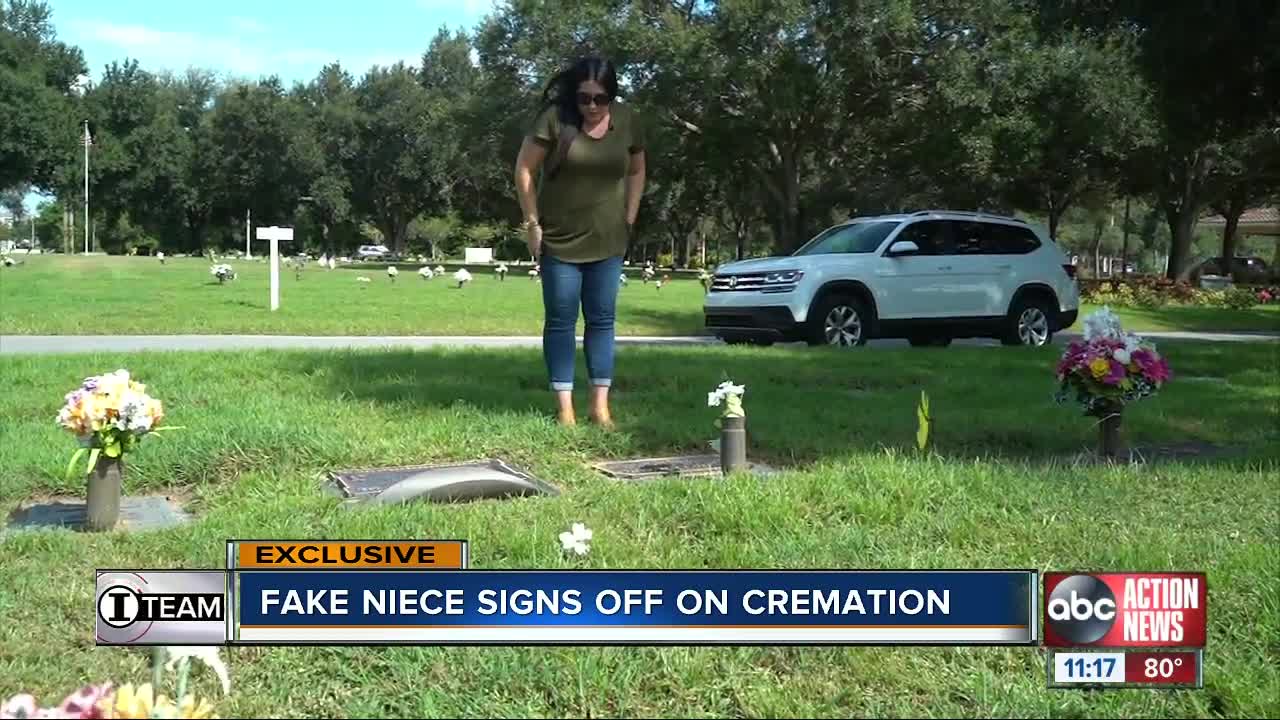 After a Manatee County man died, his niece signed off on his cremation, but the I-Team found the woman wasn’t a relative at all. 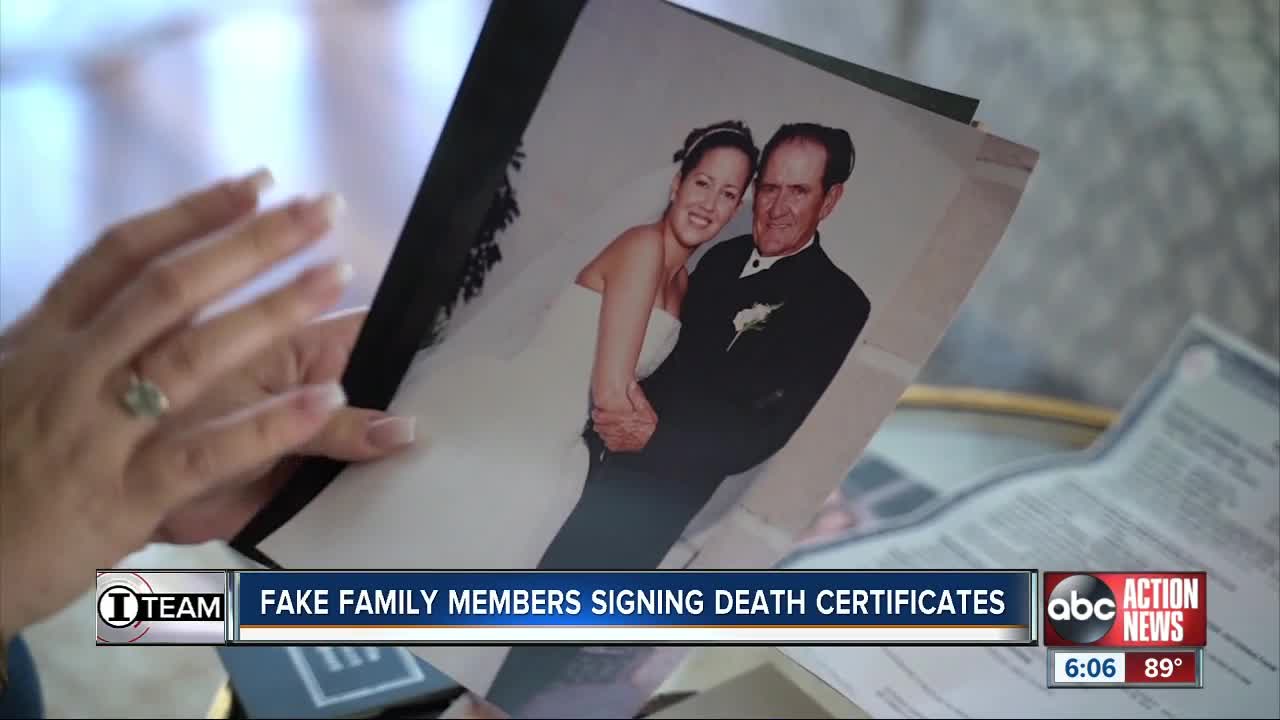 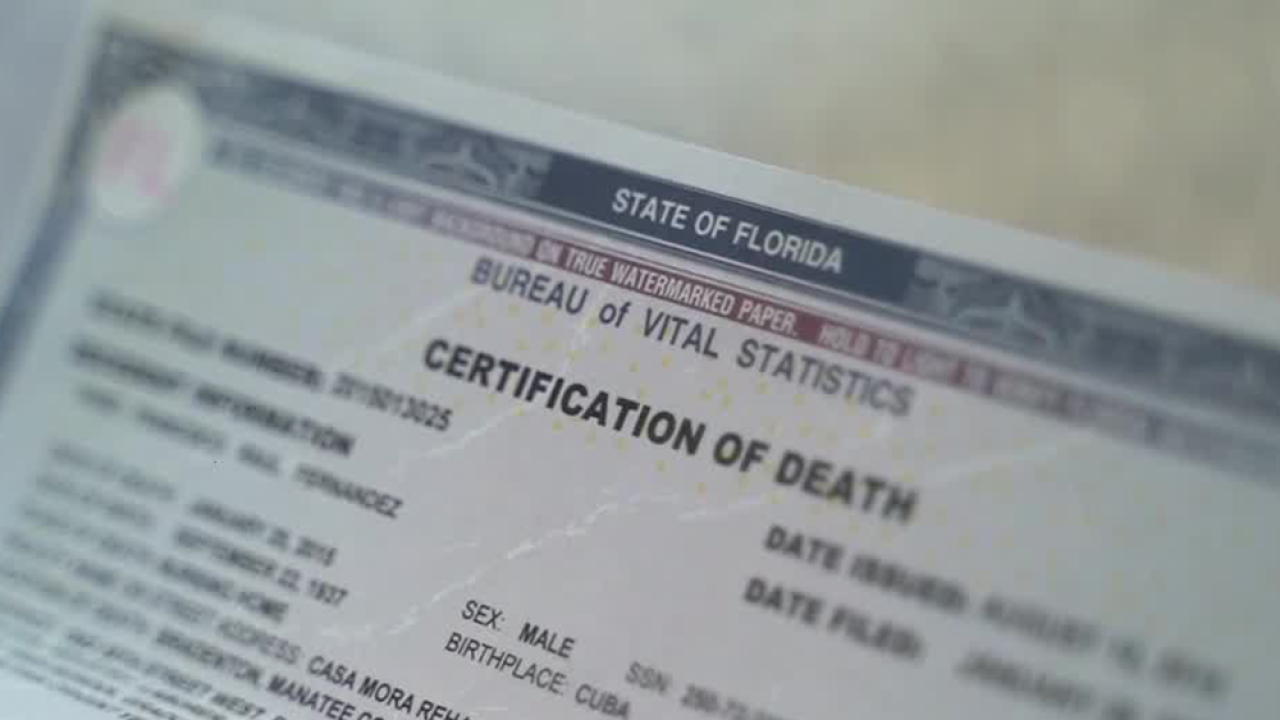 MANATEE COUNTY, Fla. – After a Manatee County man died, his niece signed off on his cremation, but the I-Team found the woman wasn’t a relative at all.

It’s a problem the ABC Action News first uncovered in July after I-Team Investigator Kylie McGivern discovered a man falsely claiming to be the nephew had signed off on the death certificate and cremation for a U.S. Navy veteran without his family’s knowledge.

The I-Team found a gap in state law doesn’t require funeral homes to verify the identity of family members.

Ana Maria Anselmi, who contacted the I-Team after seeing that July report, said something similar happened to her father.

“When I first saw your report, I was first just like, ‘Wow.’ (I was) almost shocked that this happened to someone else,” said Anselmi.

After the I-Team began looking into her story, the state agency overseeing funeral homes and cemeteries opened an investigation into the Bradenton crematory where he was taken.

But Anselmi said neither she nor her three sisters were contacted about his death.

Anselmi said she was close with her father growing up.

“He was fun, adventurous, was very involved in our life,” she told the I-Team.

Anselmi described her father as the life of the party, showing ABC Action News photos they took together on her wedding day.

But as Fernandez grew older, Anselmi said his behavior began to change and they grew apart.

“It was just this kind of erratic behavior that we’d never really seen before,” said Anselmi. “I still loved my father deeply.”

Anselmi said she and her sisters lost contact with their father for several years.

It was only after one of her sisters contacted the Department of Vital Statistics that they learned their father had died just weeks earlier.

“When we first saw his death certificate, honest to God, we questioned, ‘Is this really our dad?,’” said Anselmi. “Because his name was spelled wrong. His mother’s name, the person claiming to be a surviving relative – all of that was incorrect.”

Fernandez’s death certificate listed a woman they had never heard of before as his niece.

“He doesn’t have a niece named Claudia Crawford,” said Anselmi. “It was very…alarming, like how could this have happened?”

Karin Tompkins, owner of Good Earth Crematory in Bradenton, told the I-Team it was a mistake to list Crawford as a niece but could not say how she wound up listed on Fernandez’s death certificate or how she was allowed to sign off on his cremation.

“She was his caregiver,” said Tompkins. “That’s how she was listed – as caregiver. Niece was an error – a clerical error."

Tompkins said she relied on Crawford for all information and took her at her word that there was no other family involved.

“She did state there was a daughter but no way to contact that daughter,” said Tompkins.

Anselmi showed the I-Team Facebook messages she traded with Crawford which she said “contradicts that.”

In one of the messages, Crawford wrote to Anselmi, “He was like my uncle to me and that’s what I told people so they wouldn’t think he had no one in this world.”

“I tried to meet with her just to get some information from her on just the last month of his life – or since she walked into his life – just trying to help with us getting that closure,” said Anselmi. “But that never happened.”

The I-Team reached out to Claudia Crawford – also known as Claudia Alonzo in county records.

Crawford agreed to speak with the I-Team on camera, but then stopped returning calls and text messages and attempts to reach her at her home went unanswered.

In a voicemail Crawford left for I-Team Investigator Kylie McGivern, she said Fernandez didn’t have any family.

“I believe I made myself his healthcare surrogate because no one would come forward and he needed to get medical attention,” said Crawford.

She later added, “I was the only contact person because no one else came forward. I even helped with his cremation and it was not only until after his passing that his family came forward.”

Anselmi said she was able to get her father’s remains from the crematory and bury him in the family plot in Bradenton.

“He wanted to be buried with his mom,” said Anselmi. “He’s with his family and we have peace knowing that.”

Anselmi said she’s sharing her story to warn others and call for change.

“So that another family doesn’t have to go through what my mother and my sisters and I have gone through, then that will make it all worth it,” said Anselmi.

This story came from a tip. If something like this has happened to you or your loved one, email kylie.mcgivern@wfts.com or call 1-866-428-NEWS.