Haines City Police are searching for a man who caused a hit-and-run crash on Sunday.

HAINES CITY, Fla. — Haines City Police are searching for a man who caused a hit-and-run crash on Sunday.

Armando De Dios Cruz ran a red light on Hinson Avenue at 17th Street in Haines City, hit a vehicle, and then took off, say police.

Cruz left his two injured stepdaughters at the scene of the crash, including a 6-year-old who was thrown from the vehicle in the collision.

That girl was hospitalized, but is said to be recovering. 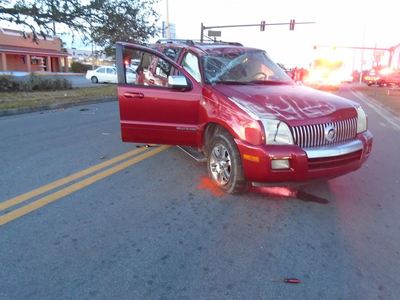 Police say Cruz didn't even bother to check on the welfare of the children before running off.

The other driver also sustained a broken wrist in the crash.

Haines City Police tell ABC Action News that Cruz does not have a valid driver's license, and is in the country illegally, which is likely the reason he ran from the scene before Police arrived, says Chief James Elensky.

Chief Elensky sarcastically describes Cruz as "Parent of the Year" and says he has issued a warrant for Cruz's arrest for leaving the scene of a crash with injury, and child neglect.