ST. PETERSBURG, Fla. - A husband and wife are behind bars in Texas after authorities said they stole $38,326.26 from Randy Frankel a part owner of the Tampa Bay Rays.

Madoussou and Oluwatomiwa Odebode are both charged with felony theft. 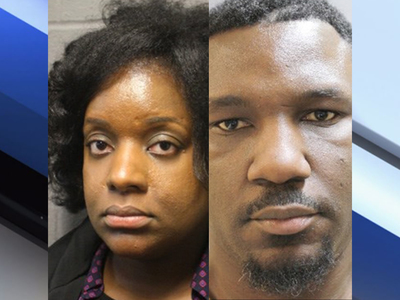 According to charging documents, the money ended up instead in the Bank of America account owned by Cypress resident Madoussou Odebode.

Investigators say Madoussou claimed she met a person who said they were interested in repairing flooded cars and then selling them.

She allegedly told Harris County deputies she contacted a friend who owned Brian Auto Sales, and forwarded an invoice to the interested entrepreneur for four cars.

When the money was paid into her account, Madoussou allegedly claimed she paid out $30,020 for four vehicles, including two flooded Mercedes Benz and two Lexus vehicles.

The Harris County District Attorney's office says however that the company Brian Auto Sales does not exist, according to charging documents.

The payments allegedly went to her husband, Oluwatomiwa Odebode, instead.

Surveillance camera footage from the Bank of America at 11288 Westheimer in Houston showed the couple purchasing two cashier's checks in the amounts of $19,200 and $10,800, according to the DA's office.

Investigators said both checks were deposited into a Chase bank account opened by an unknown person using a fraudulent passport as identification.

A whaling attack is a kind of phishing scam and CEO fraud that targets high profile executives, politicians, and celebrities.