Multiple agencies in the Tampa Bay Area were involved in a chase spanning two counties on Friday afternoon.

Multiple agencies in the Tampa Bay Area were involved in a chase spanning two counties on Friday afternoon.

TPD Air Service began to follow the suspect's car, and TPD vehicles were able to follow from a safe distance. However, before that, a southbound TPD vehicle struck a guardrail on I-275 just south of downtown Tampa. That officer received minor injuries. 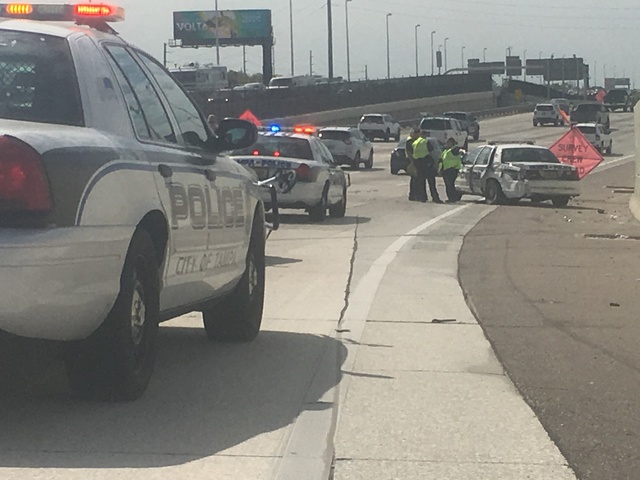 Lakeland PD got involved, where officers followed the white Toyota Corolla to a Citgo on Drane Field Road. Two suspects were taken into custody at the gas station. A third suspect got into a City of Lakeland Ford pickup truck and drove off (the keys were left inside of the vehicle).

The Polk County Sheriff's Office continued to chase the City of Lakeland pickup truck into Winter Haven where they ultimately took the suspect into custody.

Five suspects are in custody, at least three of which are juveniles.

Polk Sheriff Grady Judd says his deputies used the PIT maneuver on the last suspect, at which point he ran into a house with two elderly women inside.

"I've never been so scared in my life," said Rosa Parnell. "He just ran inside the house, we didn't know what to do."

Parnell, who has lived in the home for 49 years, says she and her sister were enjoying a peaceful afternoon, watching the Tampa Bay Rays play on TV.

Both were quickly escorted away from the scene by a Winter Haven Police officer.

"We saw police everywhere, everywhere with their guns," said Parnell.

Late Friday, the Polk County Sheriff identified that suspect as a 15-year-old from Winter Haven.

According to PCSO, the teen had a court appearance Friday morning in Bartow, then went with two other juveniles to Tampa in a car that had been reported stolen out of Osceola County.

"They're frequent fliers of ours, we arrest them on a regular basis," the Winter Haven Police Chief said. "These are juveniles that have no regard for any kind of the law.

Sheriff Judd called out the Department of Juvenile Justice, saying they should be doing more.