Trump addresses suspicious packages sent to Democrats and media, says `we have to unify, we have to come together'

As of Thursday morning, suspicious packages are known to have been sent to the following:

Crude pipe bombs targeting Hillary Clinton, former President Barack Obama, CNN and others were intercepted Tuesday night and Wednesday in a rash of attacks two weeks before nationwide elections that could reshape Congress and serve as a referendum on the first two years of President Donald Trump’s presidency.

The devices, which officials said shared a similar design, were aimed at prominent Democrats and a cable news network often criticized by political conservatives. A similar device was found Monday at the New York compound of liberal billionaire George Soros, a major contributor to Democratic causes.

10:00 a.m. — A law enforcement official says a second package addressed to former Vice President Joe Biden has been intercepted at a mail facility in Wilmington, Delaware.

The official says it has similar markings and characteristics as the packages containing bombs sent to other prominent Democrats.

The official said another package addressed to Biden was also found Thursday morning, that one at a postal center in New Castle, Delaware.

8:00 a.m. — Another suspicious package has been intercepted at a postal facility in New Castle, Delaware. Initial reports on Wednesday indicated that authorities were searching for a package sent to former VP Joe Biden, who is from Delaware. CNN has confirmed this package was addressed to Biden. This is the 9th package found since Monday.

6:42 a.m. — Police are investigating a suspicious package addressed to Robert De Niro in New York. It has similar markings as the bombs from Wednesday, including the packaging with a return address to Debbie Wasserman Schultz and stamps. NYPD was called at 4:45 a.m.

11:00 p.m. — The FBI confirmed 2 packages sent to Rep. Maxine Waters are similar in appearance to the other packages.

5:00 p.m. — The packages were mailed in manila envelopes with 6 Forever stamps on them and a return address that read "FROM: DEBBIE WASSERMAN SCHULTZ"

2:32 p.m. — President Trump addresses suspicious packages and said, "We must unify. We must come together." In addition, Trump said, "Acts or threats of political violence have no place in the United States.

2:26 p.m. — NYPD spokesman says the suspicious package sent to Gov. Andrew Cuomo's office was not a bomb, unrelated to other devices.

1:20 p.m. — New York Governor Andrew Cuomo confirms his office also received a suspicious package and that it was being dealt with. 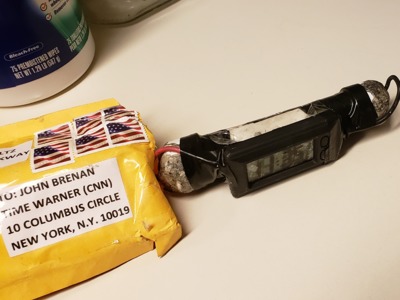 1:00 p.m. — ABC News confirms U.S. Capitol Police are investigating another suspicious package that was intercepted at a Congressional Mail Shorting facility in Maryland. Capitol Police bomb squad is on the scene.

12:23 p.m. — ABC News confirms the name and return address on at least one of the suspicious packages is Debbie Wasserman Schultz.

12:05 p.m. — Bomb Squad responding to KSEE TV in Fresno, California after suspicious package found. The station is now on lockdown. It was later determined to be a box filled with metal and trash. Police and station cleared building out of an abundance of caution due to what was taking place at CNN in New York.

11:55 a.m. — The San Diego Union-Tribune evacuates staff due to a suspicious package. It was later determined to be a box filled with everyday items. 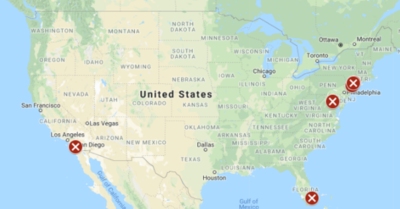 11:43 a.m — Sunrise Police investigate a suspicious package sent to the office building of Rep. Debbie Wasserman Schultz.  According to WPLG, the package was addressed to her and contained explosive devices.  The building has been evacuated.  Officials say the threat is legitimate. She was expected to appear with Hillary Clinton today at a campaign event in Coral Gables.

ALERT!!! We are working an investigation of a suspicious package near Sawgrass Corporate Parkway. Please stay out of the area of NW 8th St and NW 136th Ave. We will provide further updates when available.

11:16 a.m. — The U.S. Secret Service says media reports that it has intercepted a suspicious package bound for the White House "are incorrect."

10:33 a.m. — CNN says its offices in Manhattan have been evacuated because of a suspicious package. The news network reported on Wednesday morning that a police bomb squad was at its offices. Law enforcement officials say the CNN package was discovered in the mail room. It's not clear yet if it's related to the other packages.

10:25 a.m. — Hillary Clinton was campaigning for Democrats in Florida and wasn't at the family's suburban New York residence when a suspicious package addressed to her was seized by the Secret Service.

10:11 a.m. — The U.S. Secret Service says agents have intercepted packages containing "possible explosive devices" addressed to former President Barack Obama and Hillary Clinton. The agency says neither Clinton nor Obama received the packages, and neither was at risk of receiving them because of screening procedures. It says the devices were discovered late Tuesday and early Wednesday.