FWC not sure how tropical storm impacted red tide movement

FWC said in its latest red tide status update that it isn't clear at this time how Tropical Storm Gordon affected red tide and its movement in the Tampa Bay area. They continue to work to assess the storm's impact.

FWC said in its latest red tide status update that it isn't clear at this time how Tropical Storm Gordon affected red tide and its movement in the Tampa Bay area. They continue to work to assess the storm's impact.

Mote Marine Labs Dr.Vincent Lovko said rain could break up the aglae by churning the waters and breaking the bloom apart. But the heavy parts of the storm hit south of Pinellas and Sarasota.

“The more you can mix the water up and dilute the water with water that does not have red tide cells in it, the better chance there is of dispersing and diluting the bloom,” Dr. Lovko said. “On the negative side it is not going right over the area where the bloom is so it’s not really churning up the water. “

He also said too much water churning will bring up the muddy ocean floor and work to strengthen the bloom.

Dr.Lovko said also said since we are in hurricane season, we can expect more storms.

“This time of year often has conditions that are appropriate for a bloom so since a bloom is already in the area, there is reason to think that it might stick around.”

Meanwhile high concentrations of red tide were observed in or offshore of Hillsborough, Charlotte, Lee and Collier Counties, but not in Pinellas, Manatee or Sarasota Counties.

FWC says persistent surface currents over the past several days have likely played a role in transporting cells of K. brevis to the northwest. 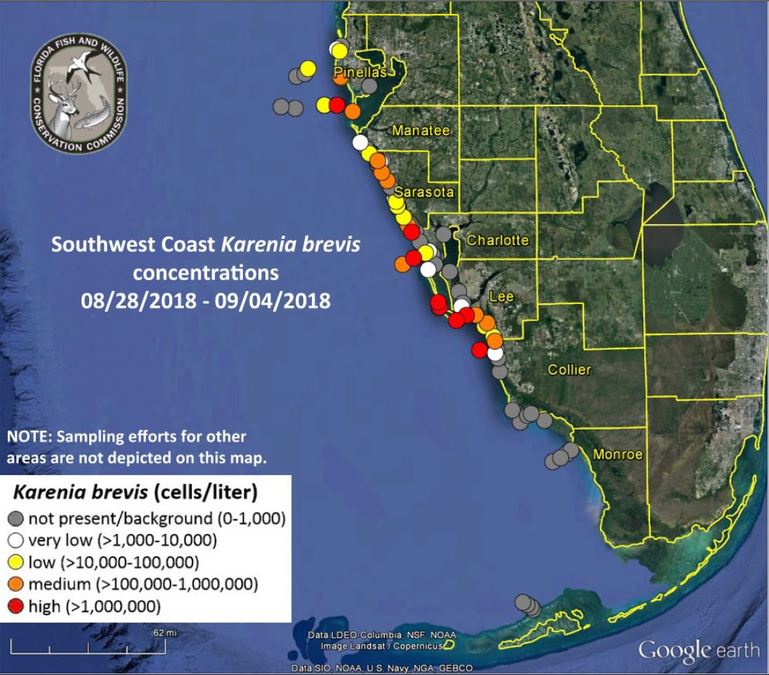 Forecasts by the USF-FWC Collaboration for Prediction of Red Tides External Website for Pinellas to northern Monroe counties predict net northwestern movement of surface waters and net southeastern transport of subsurface waters in most areas over the next three days.