Wasted Energy: How your leftovers and poop could help save the world 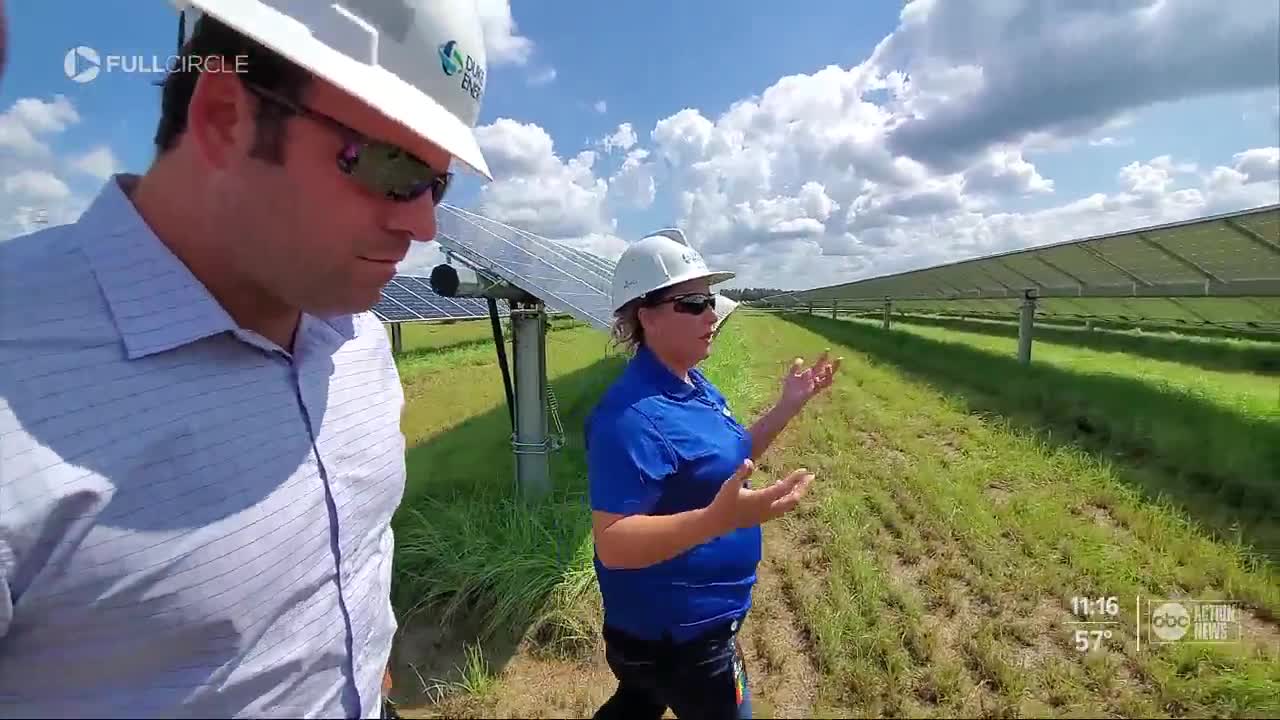 There's no single solution to producing clean energy and combating climate change. It will take a herculean effort using diverse sources of green energy sources to rid our atmosphere of greenhouse gases. 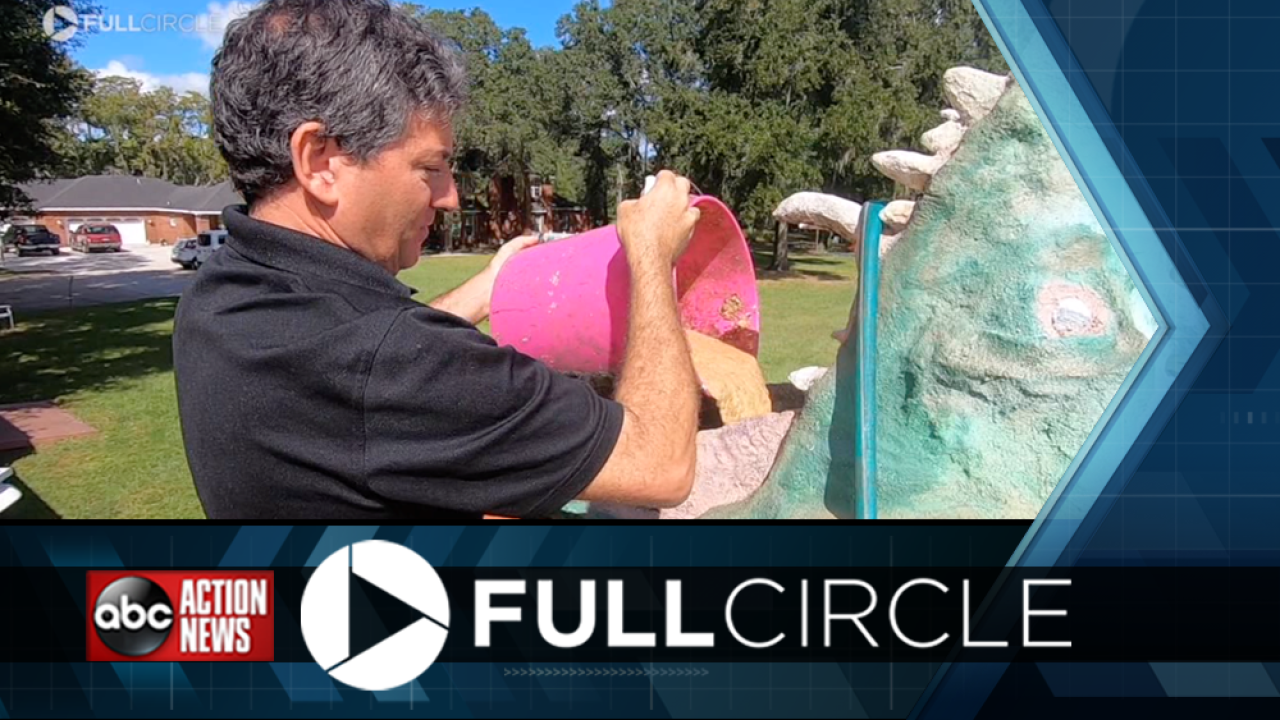 There's no single solution to producing clean energy and combating climate change. It will take a herculean effort using diverse sources of green energy sources to rid our atmosphere of greenhouse gases.

Several energy initiatives are catching on. Wind and solar are the most obvious choices. But, one couple is betting the future of humanity on something they affectionately dub "the dragon."

"This is not an incremental thing, 100% of our poop, 100% of any organic residuals you call food waste, 100% of any garbage we bring home. It stays at home and turns into value."

Culhane teaches at USF's Patel College of Global Sustainability. His students bring their leftovers to his farm to feed one of his three bio-digesters. One of the digesters, affectionately dubbed, "the dragon," is fire breathing.

"The nose shoots out flames," Culhane said with childish excitement. "I have a great video of it at night."

Culhane says the three bio-digesters in operation are giant "fart-tanks." Their gases evolve from decaying organic materials. The bacteria and enzymes in the digester break down any carbon-based items through anaerobic activity. In turn, he captures the gas and uses it for cooking.

Culhane also captures his own waste to convert to biogas.

"That's radical adult responsibility," Culhane said. "There is no shame. You just have to put these things in the right place. Poop is, if you have a closed-loop economy, a circular, economy then everything human beings do is a good rather than a bad. We just are not doing it properly."

Using solar panels, creating his own biogas, and recycling all of the waste he produces, Culhane wants to be an example to the world.

"With the amount of waste that we have right now in the United States and around the world we could certainly take care of all of our domestic needs and certainly produce all of our domestic electricity with a combination of solar and biogas," Culhane said. "The biogas that we are producing here is good made from a bad."

"Approximately 133 billion pounds and $161 billion worth of food in 2010. This amount of waste has far-reaching impacts on food security, resource conservation, and climate change. Food waste is the largest component going into municipal landfills quickly generates methane," according to the USDA.

For Culhane, there is a sad irony in those statistics. He doesn't produce enough food waste to create all of his biogas for cooking. So he has to ask his students to bring in their spoiled food, leftovers, and anything else he can use to fuel the dragon.

But, with a little thought and effort, Culhane says anyone can do what he's doing.

"The fact that with a teacher's salary that we can live completely off-grid causing harm to no one and taking care of the burden of people's waste and turning them into valuable things makes me feel dedicated and hopeful," Culhane said. "But, then worried that I can't get the message out quickly enough."

Improved solar panel and battery technologies are helping energy companies in Florida make the transition to solar. We got a tour of the largest solar farm built by Duke Energy. The farm went into operation in 2018 in Jasper, Florida. It has 300,000 panels generating 74.9 megawatts of power enough for 20,000 homes at peak production. The downside to this grid is that when the sun isn't out, the power generation stops immediately.

"As technology advances, we hope that the panels will get smaller and that all of this will take up a lot less space," Ana Gibbs, a spokesperson with Duke Energy said. "We are definitely investing in solar we are investigating in batteries in different ways that make sense so that it benefits our customers, so it's efficient also."

Gibbs said the company is investing $1-billion into solar farms across the state to reach 700 megawatts of solar in Florida, to reduce its carbon footprint.

While Duke Energy is still looking to find ways to capture and store solar energy. Florida Power and Light in Manatee County announced the construction of the largest solar-powered battery in the world.

"Innovative modernization plan will replace a pair of aging natural gas power generating units with clean and renewable energy, saving FPL customers more than $100 million while eliminating more than 1 million tons of carbon dioxide emissions," FPL said in a March 2019 news release. The company expects to have the system online by 2021. The battery system can power 15,000 homes.

"The most cost-effective for our customers the most state of the are highly efficient and environmentally friendly," Duke Energy Communications Manager Heather Danenhower said. "We say it's environmentally friendly because, with this investment in the natural gas plant, we were able to retire older coal-fired units and reduce emissions by more than 90 percent."

"We have enterprise-wide investments in nuclear, natural gas, coal, and renewables, cleaner coal the scrubbed coal that you see, we are going to drive carbon out of our future, and that will mean less reliance on coal-fired plants in the future," Danenhower said.

The two coal plants outfitted with a pollution scrubber will be in operation until 2042. The scrubber cuts down in greenhouse gas emissions, but critics say the burning of coal and fracked natural gas has to stop immediately.

Duke Energy invested $1.4 billion in the late 2000s on pollution control equipment. Danenhower said it "removes 97% of the sulfur dioxide, but it is not designed to reduce carbon dioxide. That's why we're investing in cleaner-burning natural gas plants, such as the Citrus Combined Cycle Station, which offers highly reliable and efficient state-of-the-art technology with a proven performance. Even the trace amounts of matter that are released through the pollution-control stack are heavily regulated and part of our permit requirements."

Climate protests are on the rise. Protesters want the use of all fossil fuels stopped immediately. Many are reacting to a new report by the Intergovernmental Panel on Climate Change (IPCC), calling for significant changes in how we consume energy. The IPCC is the United Nations body for assessing the science related to climate change. Climate activists calling global temperature increases, rising seas, mass extinctions, stronger storms, hundred-year floods, and melting glaciers are already creating a climate emergency.

The 728-page document, detailed how "Earth's weather, health, and ecosystems would be in better shape if the world's leaders could somehow limit future human-caused warming to just 0.9 degrees Fahrenheit (a half degree Celsius) from now, instead of the globally agreed-upon goal of 1.8 degrees F (1 degree C).

The report lists critical benefits for cutting down on carbon emissions, stating, "half as many people would suffer from lack of water. There would be fewer deaths and illnesses from heat, smog, and infectious diseases. Seas would rise nearly 4 inches (0.1 meters) less. Half as many animals with backbones and plants would lose the majority of their habitats. There would be substantially fewer heat waves, downpours, and droughts. The West Antarctic ice sheet might not kick into irreversible melting. And it just may be enough to save most of the world's coral reefs from dying."

The lead author of the report, Cornell University climate scientist Natalie Mahowald said: "for some people, this is a life-or-death situation without a doubt."

While we think about how we capture, store, and release energy. Many people may not realize the vital role natural ecosystems, like the Everglades, play in protecting our planet.

According to a study by the National Science Foundation, the Everglades mangroves' carbon storage capacity is worth billions.

"Mangrove forests absorb carbon dioxide, and much of that carbon remains trapped in the trees' biomass," the NSF said. "Based on a scientific cost estimate, the stored carbon is worth between the U.S. $2 billion and $3.4 billion. The billion-dollar price tag reflects the cost of restoring freshwater flow to areas that need it most, preserving the Everglades' mangroves."

ABC Action News reporter Michael Paluska traveled to the Everglades to meet with Doctor Tiffany Troxler. Troxler is the Director of Science at the Sea Level Solutions Center at Florida International University. Her research focuses on the impacts of sea-level rise on mangrove ecosystems. She says the Everglades are under attack from lack of freshwater coming in from the North and sea-level rise to the South.

"Because of an elevation in sea level combined with the reduction in freshwater flow, we are seeing more saltwater intrusion here, which means it's having an influence on the marshes potentially before the mangroves can move inland," Troxler said.

Troxler says water that should be crystal clear in this section of Everglades National Park is tainted a rust-red. The color is a product of decaying carbon as native plants in the ecosystem die, thereby releasing carbon dioxide back into the atmosphere.

For Culhane, the message he wants to spread to every single person on the planet is whatever he's accomplished on his farm is something the world can do to fight climate change.

"We have this lived demonstration here life tested by my wife and I over 10 years of doing this in various countries and now almost three years here that shows that 100 percent this is not an incremental thing, 100 percent of our poop, 100 percent of any organic residuals you call food waste 100 percent of any garbage we bring home stays at home and turns into value. That's radical adult responsibility," Culhane said. "We will take all the food waste from every supermarket, every agricultural place, every food transfer station, every municipality; we'll take it and turn it into clean biomethane, electricity, and fertilizer. We are just trying to get the word out."