Owner says he thought he hit an animal

DOVER, Fla. — The owner of a white Ford F-250 involved in a fatal hit-and-run that killed a 13-year-old Dover boy surrendered his vehicle to troopers Tuesday.

FHP says that charges are pending against the owner of the truck, Harold Douglas Langely, 40, of Auburndale.

Langley's attorney told troopers he claimed he thought he hit an animal the night he reportedly hit Jesus Navarro, Jr. as he was walking along the shoulder of Martin Luther King Jr. Boulevard near Mott Road early Sunday morning. The accident remains under investigation.

"That’s a lie," Jesus Navarro Sr. told ABC Action News reporter Michael Paluska. "My son is as tall as me, taller. He knew he didn't hit an animal. If he would’ve stopped and helped he’d be alive. If he called an ambulance he could’ve lived. But he didn't. He left him to die."

The family says they've been worried for two days about who hit and killed their son. They are relieved an arrest is pending but it won't bring back Jesus.

"He needs to pay for what he did," Rosa Lopez, Jesus' mom said.

Jesus' father said his son wanted to grow up to be a police officer. 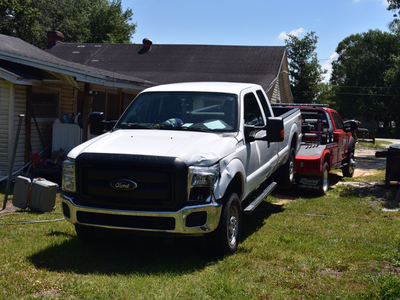 Navarro's parents didn’t find out their son had died until noon Sunday, hours after troopers found his body on the side of the road. His parents say he was at a friend's house down the street but decided to walk home early Sunday morning for some reason.

“You can’t understand the pain you feel. You don’t even feel like eating,” said Jesus Navarro, the father of the victim.

Troopers say evidence at the scene shows the suspect vehicle is a 2011 to 2016 Ford F250 XL Super Duty pickup truck.

Cameras attached to the Staggs Tree Services Nursery in front of the scene may give them more information. Security cameras on the Prime Time Food Store down the street may also prove helpful.

"My camera is on motion, but it was raining last night so it kind of caught more activity than normal,” said Ashish Patel, the manager at the store.

Patel says troopers are going over the footage hoping to get a glimpse of the truck or even the person who hit and killed the teen.

"We’re trying to figure out if the car or the person who hit the person might have stopped in my parking lot just to see the damage of the car or anything else,” said Patel.

During the day, Patel says the cameras capture amazing video but at night, it is dark and harder to see.

The FHP says the driver was driving eastbound on MLK Jr. Blvd, when they crossed over into the opposite lane and into the shoulder hitting Navarro.

"There are a lot of crazy people on the road and if you made a mistake, just stop,” Patel said. "Try to help!"

Patel says the road is also very dark at night, but still can't understand how someone could hit a young kid and leave them for dead.

"If that person has a good heart just come out and say look it was a mistake,” Patel said.