Neighbors in West Tampa are taking to social media to ask for more sidewalks and safer streets.

TAMPA, Fla. — Neighbors in West Tampa are taking to social media to ask for more sidewalks and safer streets.

The MacFarlane Park Neighborhood Association and Crime Watch Facebook page created this post following the passage of the All For Transportation Tax.

This comes as ABC Action News cameras recorded kids walking to school along streets with no sidewalks or waiting in groups in the street for the school bus in West Tampa. 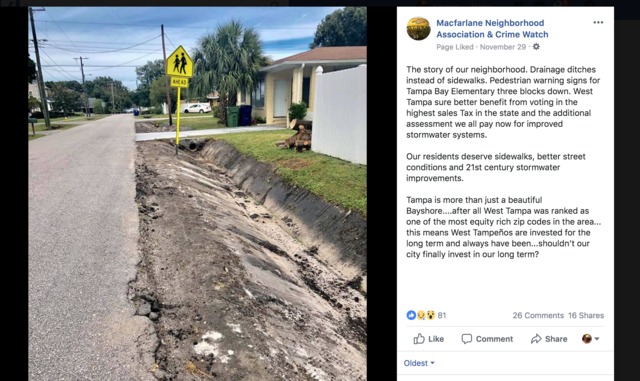 The new sales tax has residents paying 1 percent more in county sales taxes for the next 30 years. It’s estimated that the measure will raise about $16 billion to spend on transportation.

The majority of this funding is going to go to fix roads with measures to reduce congestion, add turn lanes and fix potholes, according to Tyler Hudson, one of the leaders of All for Transportation initiative.

ABC Action News went to the City of Transportation and Stormwater Services Department to ask about how the new sales tax money will be used in West Tampa.

City leaders said where the tax money will be used first is still being worked out but they are actively creating a list of projects.

Prior to the passage of the All For Transportation Tax, there was very little money for sidewalks in neighborhoods, according to Jean Duncan, director of Transportation and Stormwater Services.

Now, they said sidewalks within neighborhoods and side streets will be a priority for the City of Tampa, not just for West Tampa but many areas that haven’t yet seen sidewalk upgrades.

However, these changes could take several months. While voters passed the new sales tax, an independent advisory committee still needs to be formed to approve each item, such as new sidewalks, that the money would be used for, Duncan said.

In the meantime, projects like the Cass Street Cycle Track, Gray Street Bike Boulevard and Rome Avenue Complete Streets Project are being planned out to make West Tampa safer and more walkable.