An ABC Action News review of the latest data found at least one person is hit every day while walking on roads in Hillsborough and Pinellas counties.

Hundreds of pedestrians die each year in Florida – even as the state spends millions on public safety and education campaigns.

An ABC Action News review of the latest data found at least one person is hit every day while walking on roads in Hillsborough and Pinellas counties.

Our cameras caught pedestrians just as impatient as drivers – a woman jaywalking in her slippers and another man hopping across Fowler Avenue.

ABC Action News Reporter Nicole Grigg asked pedestrian Henry Sermons why he ran across the street instead of using a crosswalk.

“I’m going to be honest with you – most people want to get to their destination as quick as possible,” said Sermons. “Most people would rather risk their lives than wait.”

Our Driving Tampa Bay Forward tip line has received numerous requests asking us to look into what law enforcement is doing to enforce jaywalking – those who cross the road without using crosswalks.

The Florida Department of Transportation spent $9 million in just one year for its Alert Today, Alive Tomorrow campaign – and education effort known a public safety video that reminds pedestrians, “Don’t they know they’re supposed to use a crosswalk?”

The campaign launched in 2011 as Florida’s pedestrian death toll hit 498.

But six years later, the number of statewide pedestrian fatalities has shot up to 659. 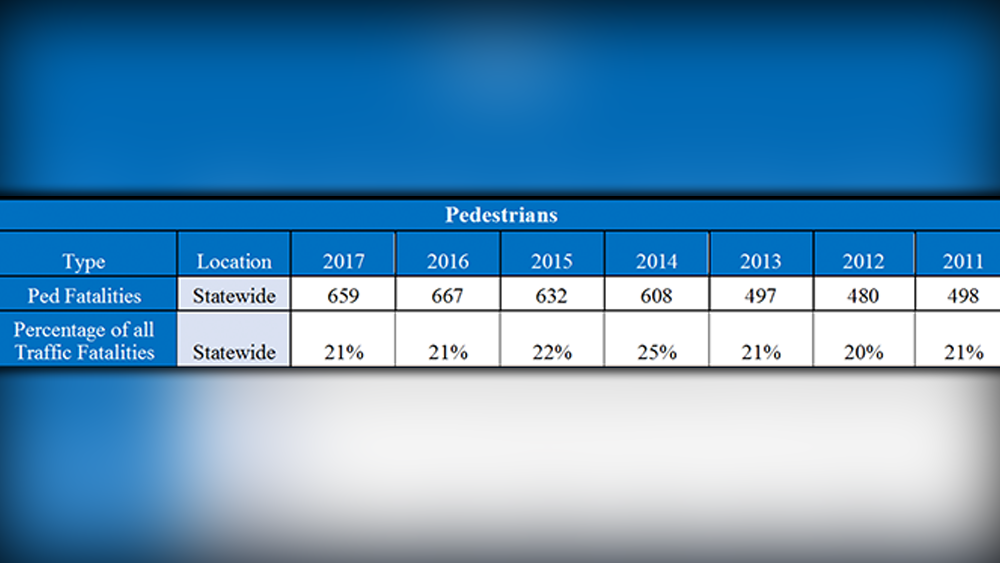 FDOT says its safety campaign is working – pointing to a slight decrease in deaths between 2016 and 2017 – but the agency also blames the growing population and increasing number of drivers on Florida roads.

“Florida moved from first in the nation in pedestrian fatalities to sixth in the nation in 2017,” said a FDOT spokesperson in an email to ABC Action News. “However, with a goal of zero fatalities, there is still much work to be done, and we won’t stop until we reach zero.”

The state used two different grants that pay for their safety campaign.

But Valerie Jones, whose 17-year-old daughter Alexis Miranda died while crossing the road near Chamberlain High School in 2015, said she believes it’s not enough.

Jones said she wants to see more enforcement to on those who walk outside of crosswalks in an effort to prevent more deaths.

“If they have to pay for a ticket or something like that, they’re probably going to think twice,” said Jones.