Pinellas County is now working to track drivers and the top locations where people are illegally passing stopped school buses in an effort to show state lawmakers how prevalent the problem is.

PINELLAS COUNTY, Fla. — Pinellas County is now working to track drivers and the top locations where people are illegally passing stopped school buses in an effort to show state lawmakers how prevalent the problem is.

In the month of May alone, here is what law enforcement officers recorded in Pinellas County as the five top places where they were issuing violations: 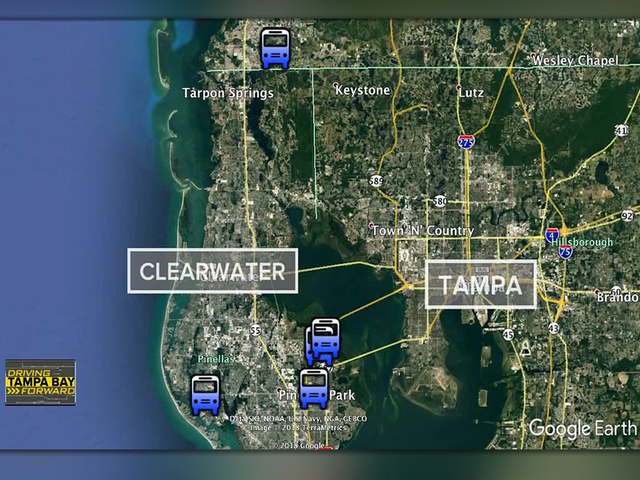 Forward Pinellas discussed the issue Wednesday with school transportation safety leaders. This Summer, our school transportation leaders plan to meet with every local legislator in Tampa Bay to advocate for photos taken of people passing school buses to be used as evidence to cite drivers.

Most school buses in Pinellas County now have cameras just below the stop arm. They look like a small white box attached to the left side of the bus. This white box is actually a camera.

"Currently, our newer buses all have stop-arm cameras on them, such that we can get the tag number of the car that passes the bus when the stop arm is out," explained Michael Burke, the Pinellas County transportation safety auditor.

However, the information gathered from these cameras cannot be used to issue tickets, per state law.

The districts across Florida have been recording the number of cars that pass stopped school buses and plan to take that information to state education leaders, who in turn will present the data to state lawmakers, according to Pinellas County Schools. They hope to work together to get that law to change.

Florida legislators have already been working on trying to curb reckless driving around school buses. The minimum fine for passing a stopped school bus starts at $165. It could even result in a suspended license.

Transportation leaders are also working to educate the public. They hope to add diagrams specifically showing when you shouldn’t pass a stopped school bus into rental cars, hotels and on electronic message boards along Pinellas County roadways.