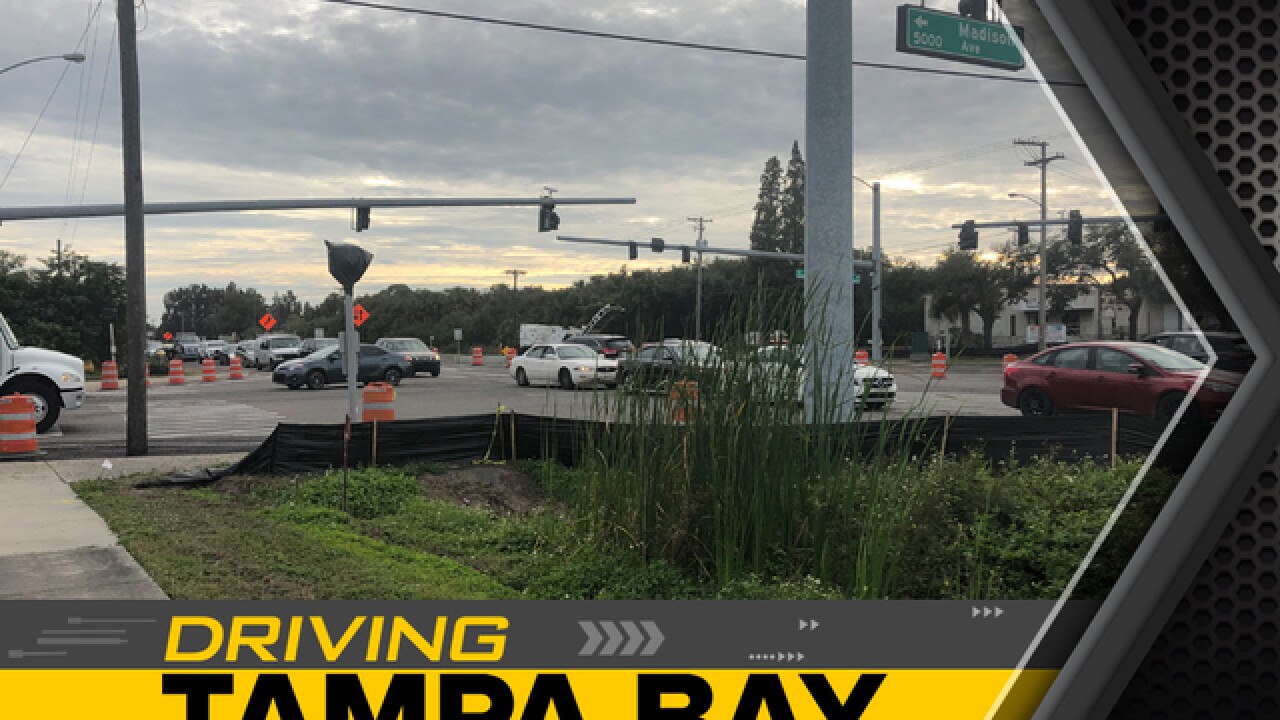 A major construction project is causing major delays near the Port of Tampa for drivers who use US 41.

However, the delays are longer than some thought, “45 minutes it took me,” said Joyce Knight.

Knight said she is seeing the chaos that’s following the major backups as drivers are cutting through businesses and neighborhoods nearby.

“Where my boyfriend lives, he says they’re just flying through there like a bat out of the river, ya know,” said Knight.

FDOT is doing a project that is making the roads at intersections concrete because of the large volume of over-sized trucks entering the port.

People who live nearby are becoming stuck in the gridlock as well, so FDOT says they’re looking to see if the timing of lights can be looked at to help.

A spokesperson tells us, “We are talking to the traffic operations staff to see if it is possible to put the signal back to the original configuration at Port Sutton and Pendola Pt during only off-peak hours.”

FDOT sent us a breakdown of the project:

The US 41 roadway improvement project between Denver St and Bull Frog Creek began in October.

On this project like many others, there are a number of buried utilities such as water and sewer that are located along the corridor under the roadway or at the edge of the roadway.  This area of the county has a mix of both very old and very new development.  As a result, many of the utilities servicing these areas are old and need to be replaced as well as upgraded for the new growth.   Due to the proximity of these utilities to the roadway, around the clock lane closures are necessary to safely install the new ones and remove the old ones.  These upgrades and replacements are being done prior to the paving so that the new asphalt is not torn up or damaged later.  It is anticipated that the utility work will be occurring along the corridor for the next couple of months.

Additionally, this project includes repaving US 41 and the reconstruction of two intersections leading into Port Tampa Bay;  Port Sutton at US 41 and Pendola Point at US 41.  The asphalt in these intersections will be removed and replaced with concrete.  Similar to the US 41 at SR 60 intersection that was rebuilt a few years ago.  Concrete is being used to enhance the durability of the intersection to withstand the demands on the roadway surface from growth in the area and the increased truck traffic from Port Tampa Bay.  In order to rebuild these intersections, traffic has been reduced to a single lane in each direction.  This will be an around the clock activity.  This work will be done in phases allowing for US 41 and the entrances to the Port to remain open however traffic will be down to a single lane for the duration of the intersection work. It is anticipated that the intersection work will take approximately 8 months to complete.

We will work with our contractor to enhance signage in the area to alert motorists to the potential for travel delay.  We strive to minimize the impact of our roadway improvements on motorists, businesses and residents however there are times that inconvenience is unavoidable.  Thank you in advance for your patience as we continue to improve and maintain our transportation network.